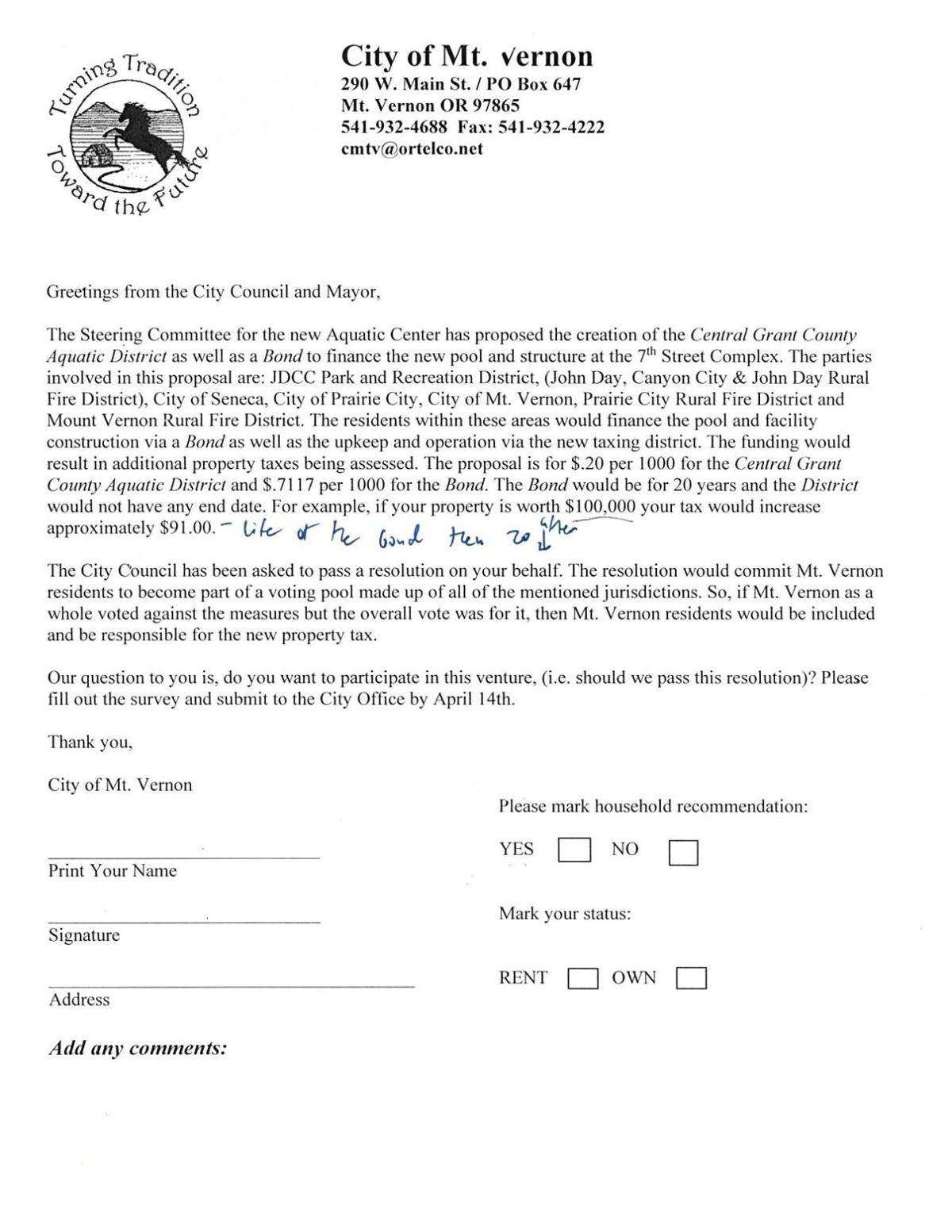 Mt. Vernon sent out 200 surveys to residents with their utility bill.

Mt. Vernon sent out 200 surveys to residents with their utility bill.

The details on the proposed aquatic center are out, but the conversation during a recent John Day City Council meeting focused on voting and what would happen if cities decided to vote against establishing a new county service district.

The John Day City Council passed a resolution on June 9 to support Grant County initiating a ballot measure to establish a county service district for the purpose of providing and operating a new public swimming pool for the residents of central Grant County.

While John Day passed the resolution, Mt. Vernon city council voted against a similar resolution during a meeting in April.

One of the factors in Mt. Vernon’s decision was a survey the city sent out to 200 residents, according Mt. Vernon Mayor Kenny Delano, where 30% sent a response back to the city with 81% of respondents saying they would not want to participate in the pool venture, according to City Recorder Tami Kowing in April.

The survey focused on the proposed aquatic taxing district, which would encompass Prairie City, Mt. Vernon, Canyon City, Seneca and their rural fire districts. Delano confirmed that the city council is staying firm on their decision.

“We’ve had some discussions (since the vote), but we didn’t think it was necessary to revisit that decision,” Delano said. “The hospital bond is expiring, but to place a never-ending tax burden along with the bond, the citizens I’ve talked with don’t want that. If they want to do that, they’re going to have to go about it and redraw those district lines.”

John Day Mayor Ron Lundbom said he asked several of his employees from Mt. Vernon what they did with their ballots. One said he left it in his pickup and doesn’t vote on surveys anyway, and the other employee said he will vote when it’s time to vote on an actual ballot.

Lundbom added that it would have been nice to have gone to Mt. Vernon and present the numbers to them with the final draft of the report because he feels there are misunderstandings going around.

“I don’t think 40% of people responding to a survey is an accurate response, and whether 80% of those people said no, that’s still not the majority of the 200 people in Mt. Vernon that got the ballot,” Lundbom said.

Lundbom asked how this would affect the tax rate, and if the rate would go up if other cities like Mt. Vernon said no to supporting the proposed plan.

“No, if they opt out, they’re out, and the financials don’t work anymore,” said John Day City Manager Nick Green.

The city council then talked about giving people in the county a chance to vote if they support or disagree with the pool.

“I think it should be put on the ballot, no questions asked, and it’s up to the people to vote on it,” said Councilor Gregg Habberly. “It’s not the city council or the county telling them they’re gonna pay it if the citizens didn’t get to vote on it.”

Delano explained why voting also played a factor in turning down the resolution. He said that Mt. Vernon could easily be outvoted by John Day residents alone to be a part of a project that many Mt. Vernon residents are not interested in.

Green said there are more voters outside of John Day in the initiative than there are within the city.

“John Day would not carry the vote,” Green said. “There are more people in Prairie City and Canyon City combined than there are in John Day, and when you add Mt. Vernon, Seneca and all the area in between, there’s quite a few more people outside the city than within it.”

Grant County Commissioner Sam Palmer was at the June 9 meeting and said he did some community outreach for feedback on how he should vote or approach the situation.

“The question I pose to business owners, property owners, taxpayers is the governor imposed a lot of new taxes on taxpayers, I take that into account, but I think it’s everybody’s right to vote on something,” Palmer said. “I’m leaning towards the camp of voting to put it on the ballot if it comes to us.”

The John Day Swim Team plans to attend the Canyon City City Council meeting on June 23, past press time. Their goal is for Canyon City to pass a resolution stating they support Grant County initiating the formation of an aquatics district by placing it as a ballot measure for the voters to decide in the November election.

“We want an opportunity to campaign and vote,” reads a message on the John Day Swim Team Facebook page.

Patriotism is on the decline in America