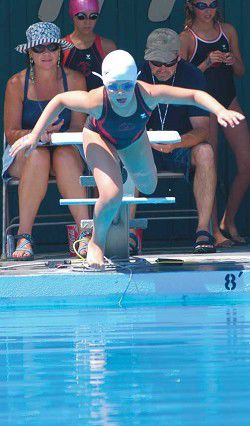 Above: Natalie Stearns dives into the pool during the 50-yard butterfly at the John Day Invitational July 26. The Eagle/David Heldreth 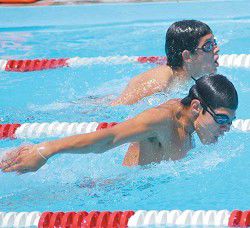 Omar Medina, front, and Tanner Wilson swim side by side during the 100-yard butterfly. The Eagle/David Heldreth

Above: Natalie Stearns dives into the pool during the 50-yard butterfly at the John Day Invitational July 26. The Eagle/David Heldreth

Omar Medina, front, and Tanner Wilson swim side by side during the 100-yard butterfly. The Eagle/David Heldreth

Teams from across Eastern Oregon and beyond spent July 25 to 27 camped out around Gleason Pool. Burns, La Grande, Baker City, Lakeview, Prineville, Hermiston and Caldwell, Idaho, all sent teams to the event.

"It was the first time we've got the sportsmanship award this year," Lemcke said. "I'm glad we got it because the difference between a good swimmer and a great swimmer is attitude and it shows these kids have the right attitude."

The local swimmers improved their times as well as their attitudes last weekend. John Day swimmers tied or broke their personal records in all but four of their heats.

Lemcke said although there were a lot of swimmers at the meet, the numbers are down from previous years.

"It seems like fewer kids are swimming and those that do are going to fewer meets," Lemcke said. "We've been noticing it at the other meets, too. People have been saying gas prices have been affected them. It's hard to travel to meets like we do. We go to Lakeview twice a year."

The team will travel to Lakeview Aug. 1-3 for the district swim meet. John Day will compete against teams from Lakeview, Burns and Baker City during the meet. The top swimmers from the district meet can qualify for regional swim meets.

See B2 for individual results.