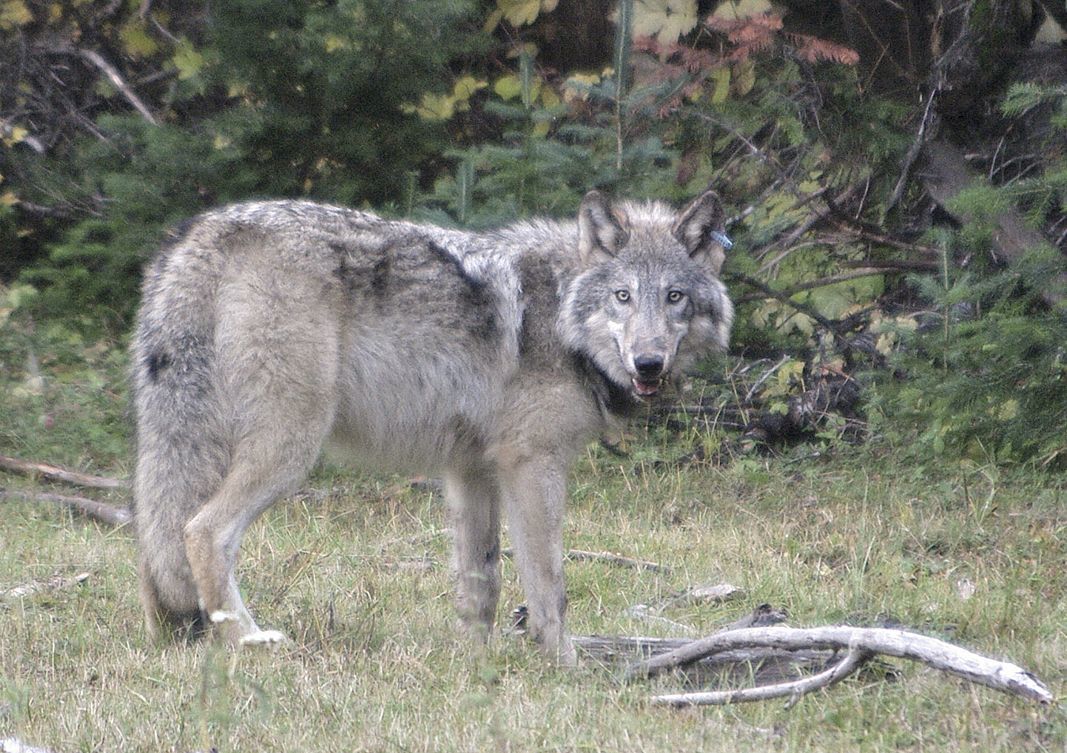 The Oregon Department of Fish and Wildlife has designated a new Area of Known Wolf Activity near Long Creek. 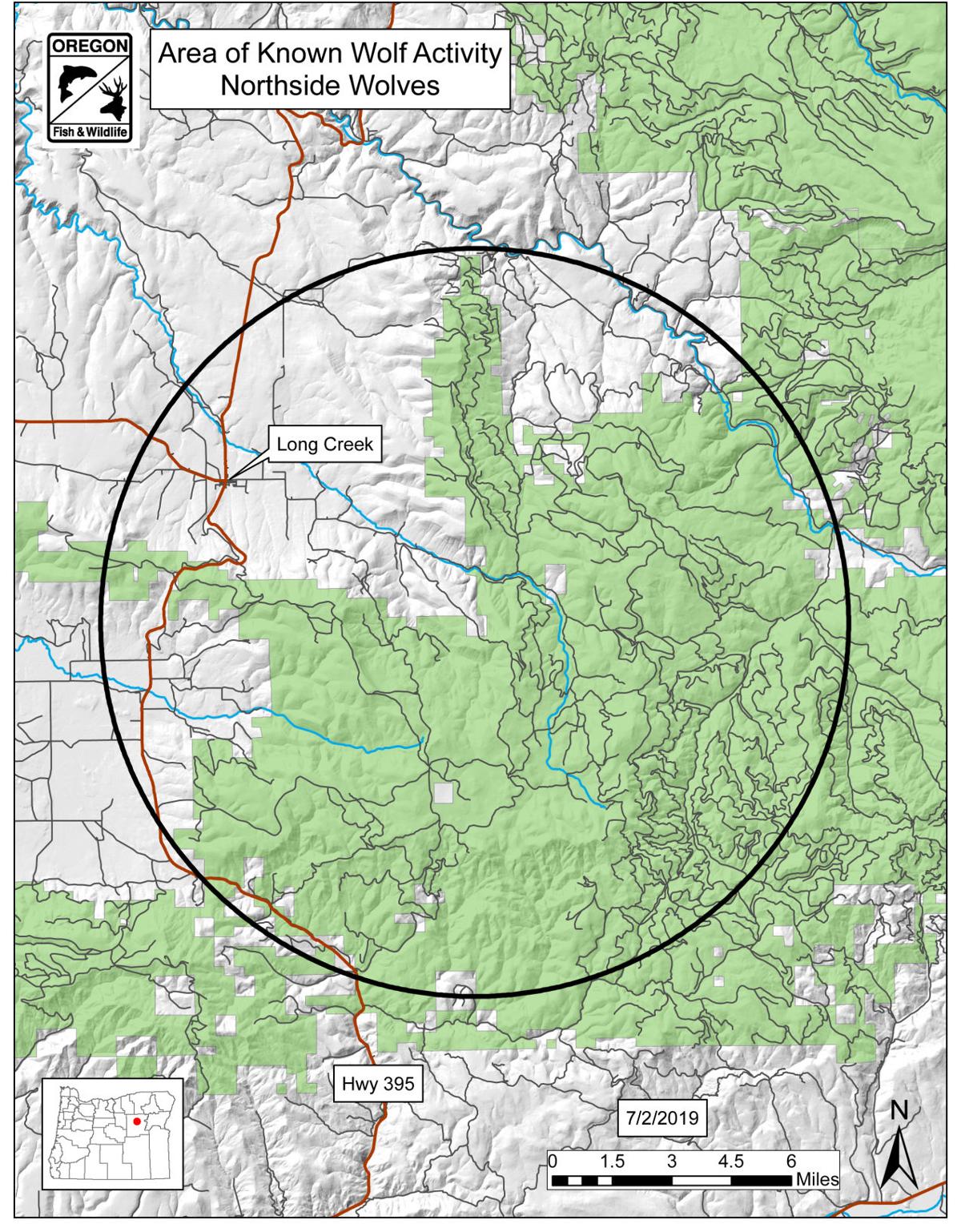 This map from the Oregon Department of Fish and Wildlife shows an approximation of the range occupied by two wolves confirmed to be in the Keeney Meadows area north of Mt. Vernon.

The Oregon Department of Fish and Wildlife has designated a new Area of Known Wolf Activity near Long Creek.

This map from the Oregon Department of Fish and Wildlife shows an approximation of the range occupied by two wolves confirmed to be in the Keeney Meadows area north of Mt. Vernon.

Two wolves seen east of Highway 395 and north of Mt. Vernon don’t appear to have bred, and there’s been no evidence of livestock depredations.

According to Ryan Platte at the Oregon Department of Fish and Wildlife’s John Day Field Office, trappers first reported seeing two black wolves in the Hog Creek and Long Creek Mountain area during the past winter.

ODFW personnel found the wolf tracks in the snow and set up trail cameras. There were no hits until June after the cameras were relocated, Platte said. First they had a photo of a single wolf, then another photo with another wolf and finally a sequence of one and then the other, he said.

A rancher working on a fence in the Keeney Meadows area reported in June seeing one wolf for sure and maybe a second, Platte said.

Platte said ODFW believes the two are a male and female because one is larger than the other. No pups have been photographed by the trail cameras, which are checked about every two weeks, he said.

Wolves can range over a wide area, especially if they are in a small group and are not denning, Platte said. A wolf that was collared in the Desolation Creek area north of Keeney Meadows ranged from the Elkhorn Mountains near Granite all the way west to Service Creek near Fossil and south to the Middle Fork of the John Day River, he said.

ODFW officials won’t provide detailed information on the location of the wolves, such as GPS data or the site of trail cameras, in order to protect the wolves, Platte said. Officials have met with ranchers holding grazing allotments in the area and spoke to them about the sightings and state regulations governing wolves.

ODFW is the first to hear about wolf attacks on livestock, and so far the agency has received no depredation reports involving the Keeney Meadows wolves, Platte said. With only two wolves in the group, the impact on elk and deer would be too small to detect in the field, he said.

In addition to the Keeney Meadows pair, the two to three wolves in the Desolation Creek area and a “pair” in the Heppner area northwest of Desolation Creek, there was a report of a wolf sighting in the Logan Valley area last year, Platte said.

Archers who had set up trail cameras in the Logan Valley area reported seeing a black wolf, and video supplied to ODFW confirmed the report, Platte said. ODFW also confirmed a wolf attack on a calf in Logan Valley last fall.

ODFW heavily monitored the Logan Valley area after the attack but found no signs of a wolf, Platte said. That winter, ODFW received two reports of wolf tracks seen in the snow in the Murderers Creek area, which were confirmed by ODFW personnel who responded to the site.

Matt Jones, a Mt. Vernon rancher with 80 cows on a 7,000-acre grazing allotment in the Keeney Meadows area, said locals have suspected wolves were in the area for the past decade. At least five different people said they saw a wolf in the past 5-10 years, he said.

So far, Jones has had no wolf or other predator problems. Coyotes are too small to take anything more than a sick calf with an inattentive mother, and cougars are more interested in deer, he said.

Jones said ODFW officials told him to immediately cover any cow carcass he finds with a tarp to prevent it from being eaten by other predators and then call ODFW. The carcass can then be examined to determine if it was killed by a wolf. He was also told to remove the carcass soon so it wouldn’t attract wolves or other predators to the area.

The grazing area is so large that finding a cow carcass is difficult, Jones said. In the past 15 years, he’s only lost one calf, which he never found so he’s not sure what happened to it.

Jones said ODFW officials are reluctant to blame cow deaths on wolves and will offer other explanations. But if he’s missing cows at the end of this season, that could be evidence that wolves are to blame, he said.

Jones said he’s concerned about the wolf reintroduction program in Oregon but feels pretty helpless about it. All he can do is be out with his cows, he said. Using guard dogs is not advised as cows will lose their natural instinct to fight back against wolves, he said.

Jones said he expects the problem will get worse as more wolves move to Eastern Oregon and eventually form packs. The two in Keeney Meadows are probably looking for a home, he said.

The Oregon Fish and Wildlife Commission approved an updated Oregon Wolf Conservation and Management Plan on June 7. The plan was first adopted in 2005 and was updated in 2010. The plan’s goal remains the same: “To ensure the conservation of gray wolves as required by Oregon law while protecting the social and economic interests of all Oregonians.”

The U.S. Fish and Wildlife Service delisted the gray wolf from protection under the Endangered Species Act in 2011 east of highways 395, 78 and 95. Oregon delisted gray wolves in November 2015.

The updated plan includes new information on status, population and distribution, new science related to biology and management and management improvements based on information gained over the years. But some things remain unknown.

“While Oregon’s wolf population is predicted to continue to grow and expand its distribution, it is unclear at this time what the future population and specific distribution will be,” the plan states.

According to the updated wolf plan, 134 confirmed depredation incidents occurred in Oregon from 2009-2018 with 193 livestock losses, including 71 cattle.

“As the Oregon wolf population increased from 2009-2018, incidents of wolf depredation trended upward,” the plan states.

Factors that can affect wolf depredation of livestock include pack size, livestock density, pasture size and remoteness, livestock husbandry methods and abundance of native prey, the plan states. Cattle depredations may increase in spring, when calves are small, and then peak in the fall, when wolf pups are larger and pack cohesion and energy demands are higher.

Biden: Science team 'among the brightest, most dedicated'