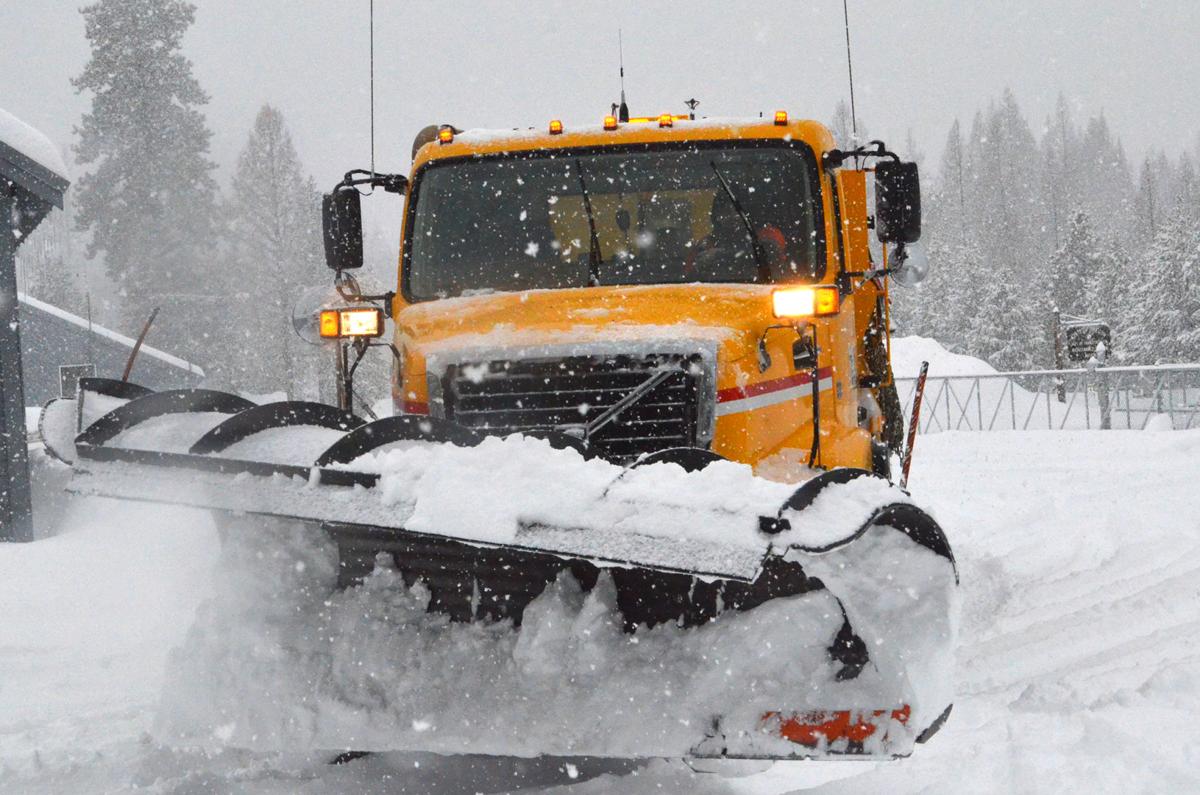 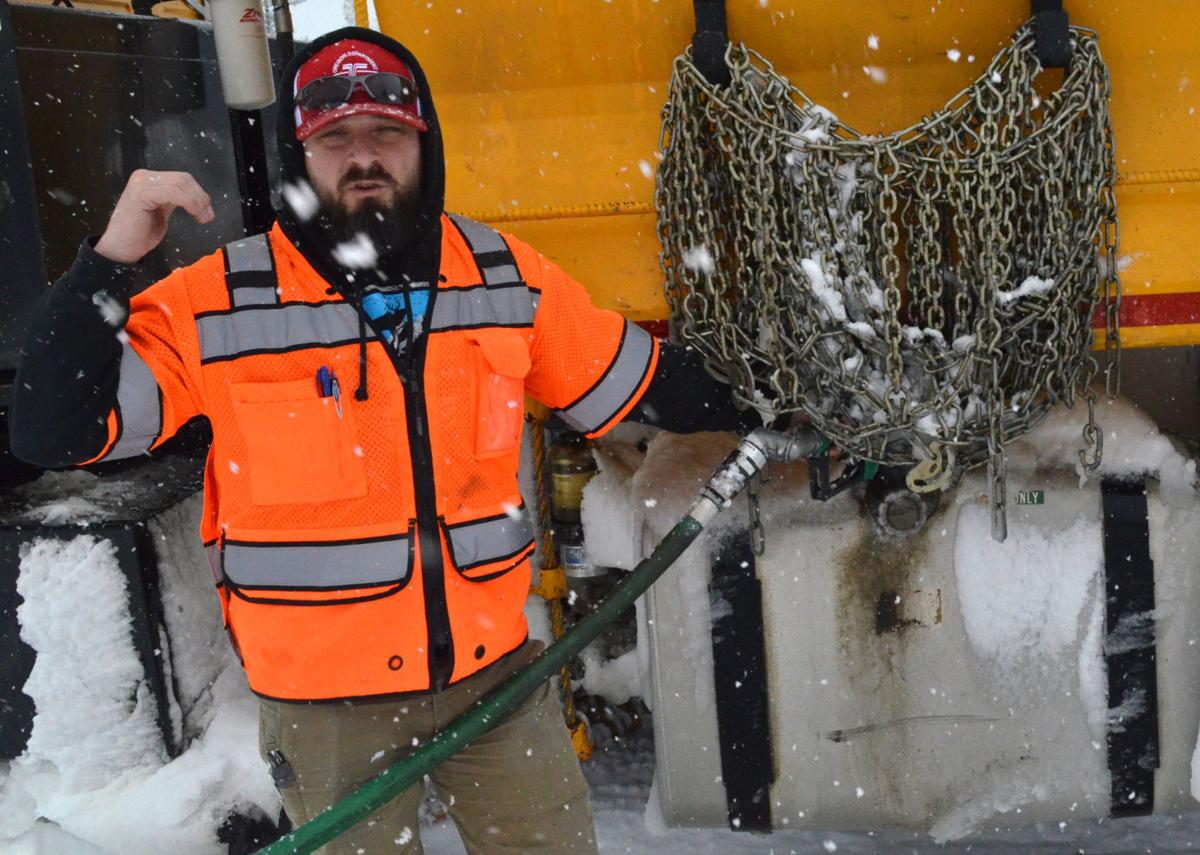 Toby Gangler, a transportation maintenance coordinator for ODOT, fills up with 60 gallons of fuel after plowing. 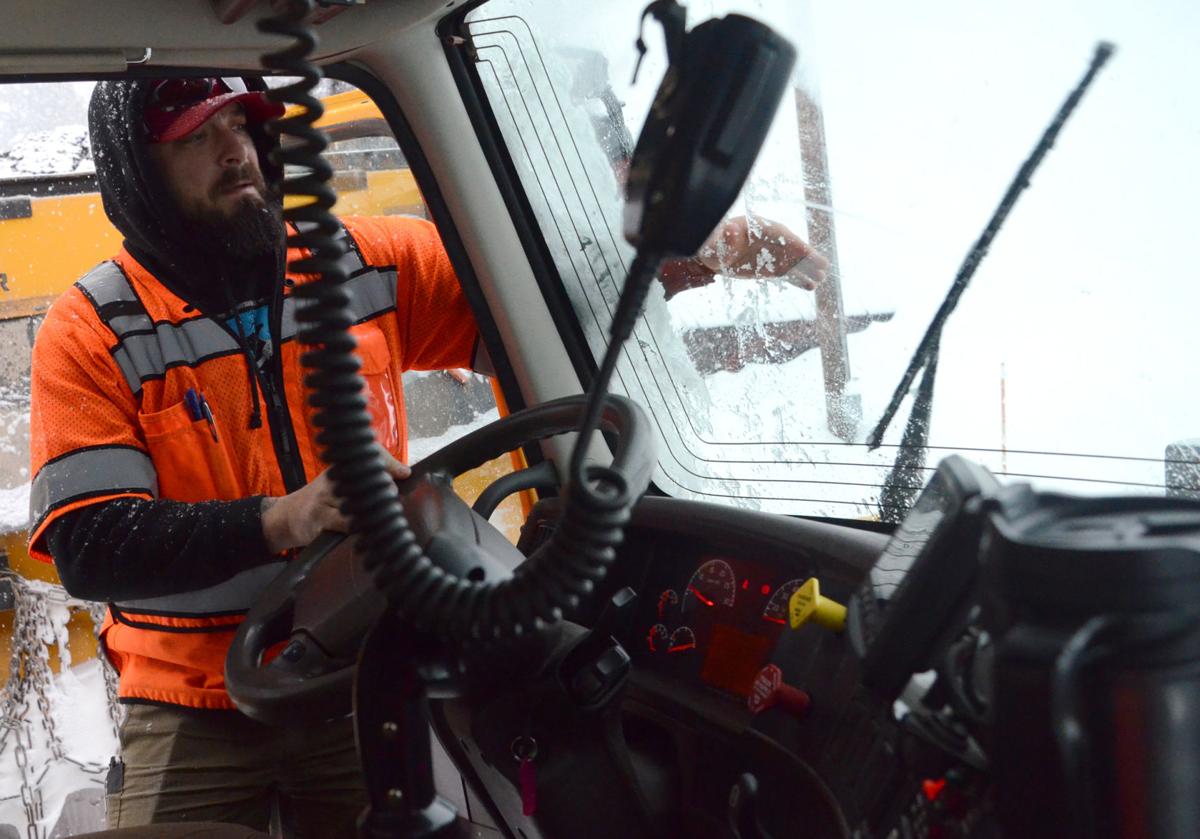 Toby Gangler, a transportation maintenance coordinator for ODOT, cleans his windshield because the wiper did not get all the snow. 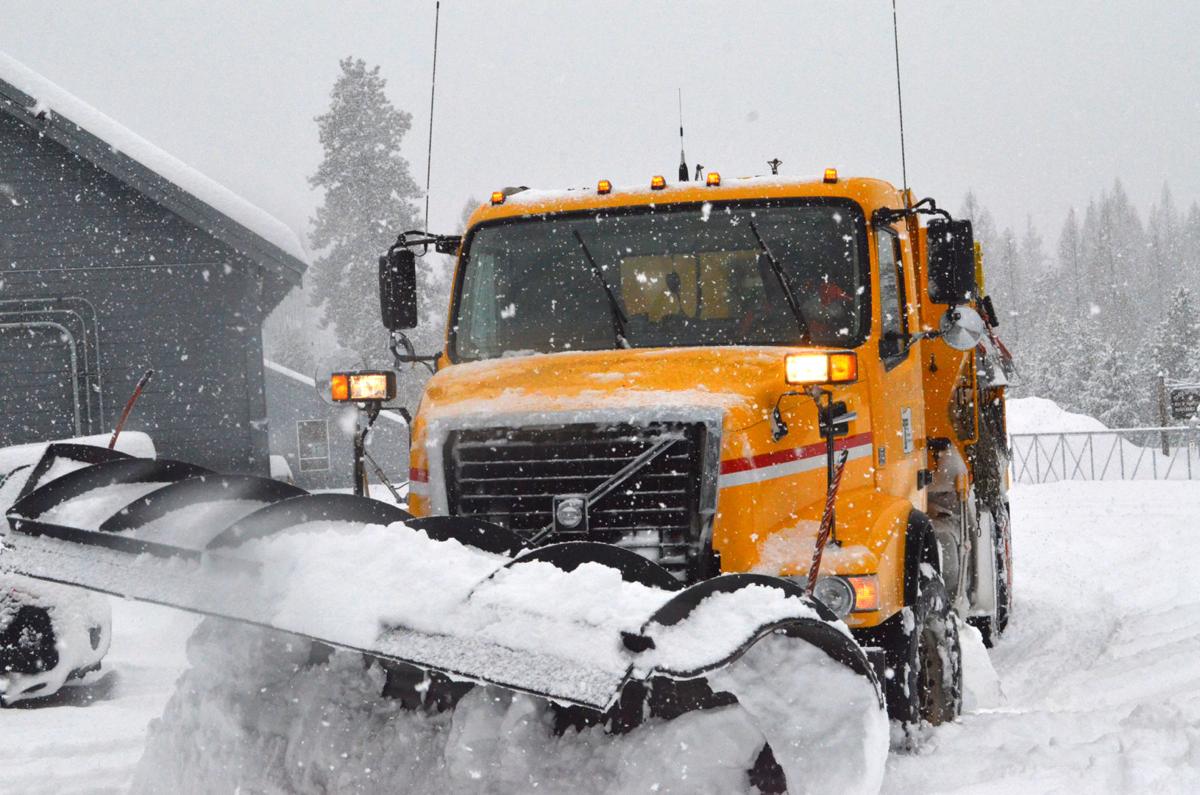 The Oregon Department of Transportation Maintenance Station engulfed in snow at 8:30 a.m. Feb. 5. 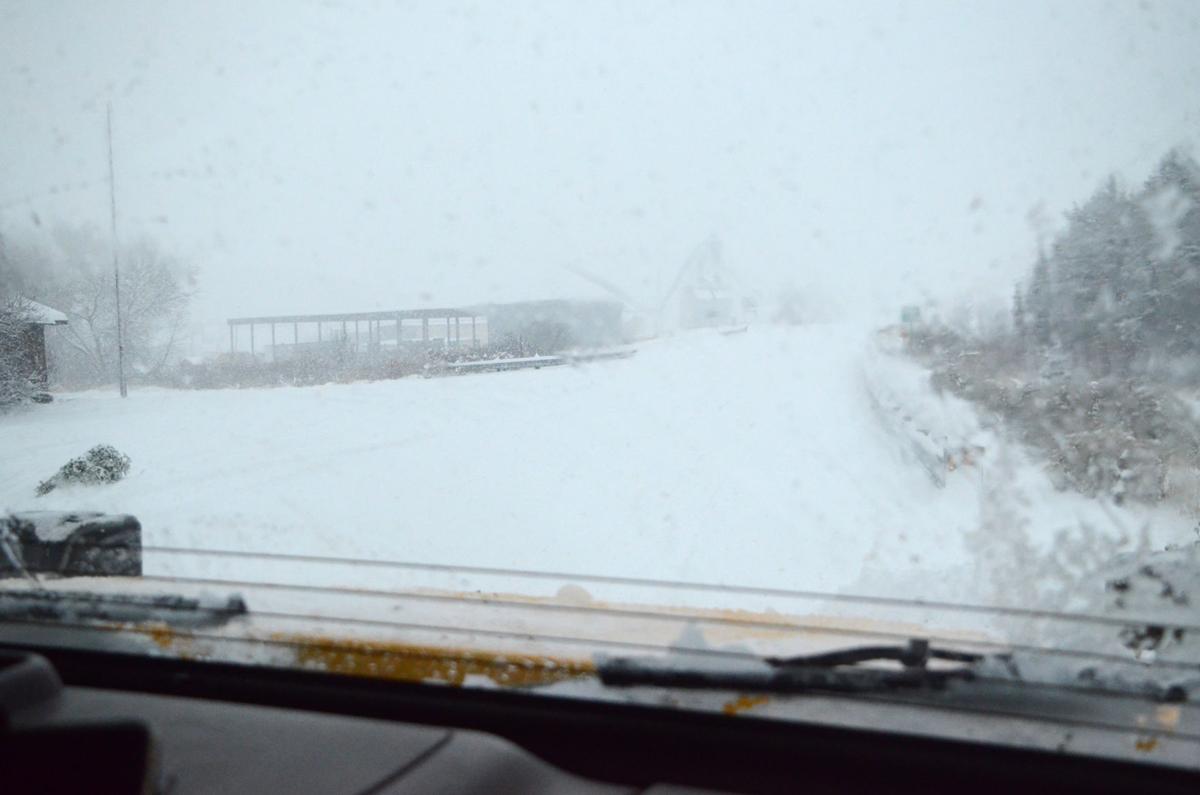 As the visibility goes down near Dixie Creek, Gangler turns around to conclude the first half of the ride along. 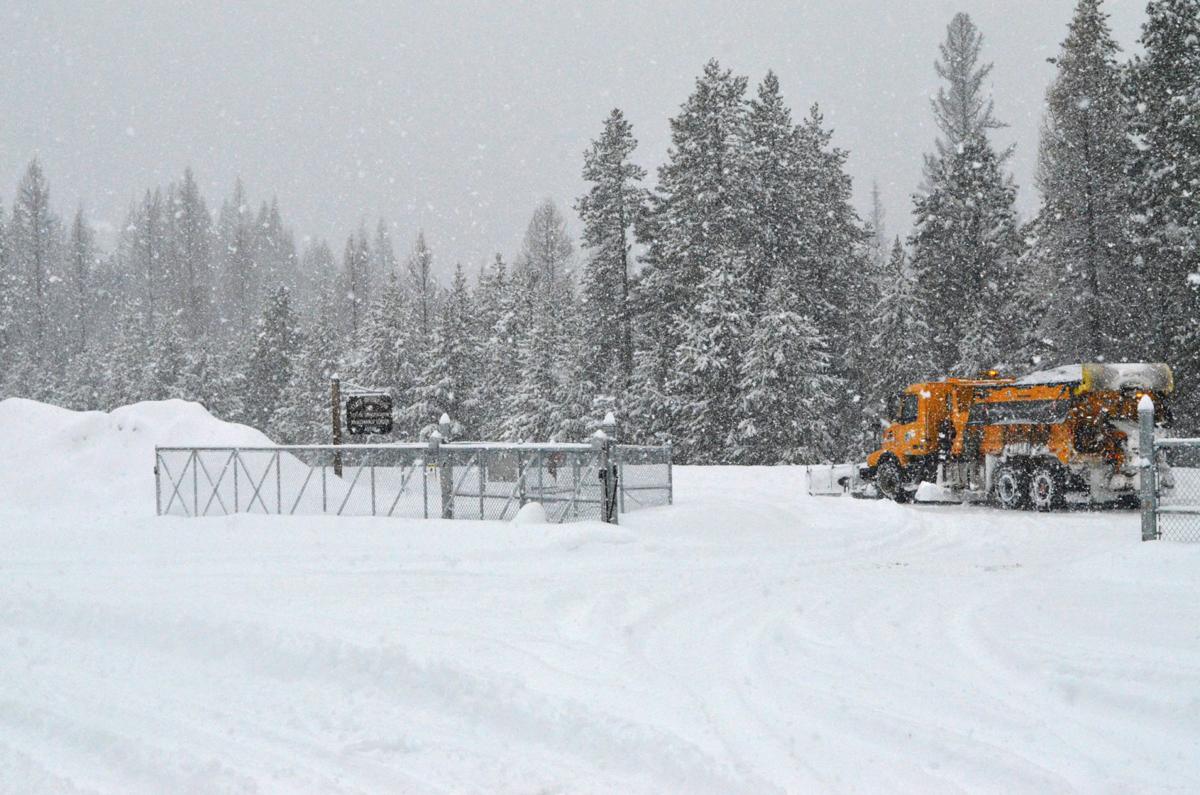 Gangler continues his 5 a.m. to 5 p.m. shift in the snowfall.

Toby Gangler, a transportation maintenance coordinator for ODOT, fills up with 60 gallons of fuel after plowing.

Toby Gangler, a transportation maintenance coordinator for ODOT, cleans his windshield because the wiper did not get all the snow.

The Oregon Department of Transportation Maintenance Station engulfed in snow at 8:30 a.m. Feb. 5.

As the visibility goes down near Dixie Creek, Gangler turns around to conclude the first half of the ride along.

Gangler continues his 5 a.m. to 5 p.m. shift in the snowfall.

On Feb. 5, a snow storm engulfed Grant County and covered roads and highways with layers of gorgeous, yet potentially dangerous, snow for drivers.

At 5 a.m., Toby Gangler, a transportation maintenance coordinator for the Oregon Department of Transportation, began his 12-hour shift in ODOT’s 24-hour effort to clear off highways and keep drivers safe.

At the ODOT office near Austin Junction, the shop was covered with enough snow to stop any passenger-size vehicle without four-wheel drive. Gangler arrived in a 2017 Volvo dump truck with a 60-gallon tank and a large plow mounted on the front.

Gangler pulled the snow plow onto the highway toward Prairie City, and the fight against Mother Nature began.

The man, the snow and the rig

This is Gangler’s fourth winter plowing the highways, and he is no stranger to the area, having grown up in Prairie City. He is one of four families that live near the Austin compound.

“There are four families that live up here (near the compound) so there are four hands that work here,” Gangler said. “We have the old town of Austin with a small community, and there’s a handful of people who live on the Middle Fork (John Day River) so we are not by ourselves, but it is fairly remote.”

His team maintains several highways, including Highway 26 from Ironside, east of Unity, to the western edge of Prairie City at Dixie Creek. They also maintain Highway 7 from the compound to Sumpter and Highway 245. During the day of the storm, three drivers worked together to clear the roads while snow continuously fell.

The plow pushed an abundant amount of snow to the right side of the Volvo, while the vehicle lightly shook and traveled about 30 mph, which is about as fast as a snow plow driver would want to go, Gangler said.

“At that speed, we can get the most snow off, and it throws the snow far enough on the sides,” he said. “What we will do is pass up the middle both ways, and then we have to take the snow on the edge and throw it over (the shoulder). For a highway, you have to go around it four times to get all the snow off and get it out of your way for the next time.”

Gangler said the process requires patience: It takes him two hours to go from Prairie City to milepost 205 at the chain up area in one round trip, and then he has to repeat that trip to cut the edges.

“When it’s snowing like this, it can get frustrating because, by the time you get back around and make a full circle, it doesn’t even look like you did anything on the other side,” Gangler said. “It’s hard sometimes, and you want to make it go away, but you just can’t. You can’t wish it away, I tried.”

As the temperature began to rise, the truck slowed to about 20 mph because of the added density of the wet, slushy snow. The plow in front runs on the ground but is built to help preserve the pavement life.

“It’s sitting on the pavement, but we have what we call shoes that run on both sides of the plow that won’t let it go any farther than what we set it at,” Gangler said. “They kind of act like a squeegee. The carbides cut into the snow and get as deep as they can without actually damaging the pavement.”

Gangler looks out for drivers behind him and tries not to slow them down so they do not lose momentum driving in the snow, especially semi-truck drivers. At one point, Gangler slowed down and signaled a semi to pass because the plow was creeping up the hill at 20 mph.

The motivation and people to think about

Plowing snow requires patience and being aware at all times, multi-tasking between the road and radio calls from fellow workers and the dispatch center in Bend. The job provides its trials, but Gangler said that the team fights to keep the roads in their best condition.

“It’s a challenge first of all because we are fighting against Mother Nature, and none of us want to get beat,” Gangler said. “We bust our butts to give people confidence to travel, and our biggest concern is that we all have kids and they are riding buses, going to sports events, and we want to keep them safe.”

Being able to help somebody in a bad situation on the road and witnessing the finished product after hours of plowing snow are also motivating factors.

“Snow is beautiful, but it’s a lot of work to us,” Gangler said. “When this storm is done and everything is white and the roads are as wide as we can get it, people are driving on it without any problems and without any worries.”

His experiences and advice to drivers

Gangler has experienced some intense moments behind the wheel.

“Things can get interesting really fast, and I had a person this year ... the car was coming around the corner and for some reason he slammed on his brakes when he sees me and slid into my lane,” Gangler said. “I had to try to get my wing plow (on the side of the rig) up and maneuver around him, and I barely missed him with the front of my plow, and I got my wing up just in time to hit the side post, but nothing was damaged.”

Gangler recalled another incident involving a car and snow on the guard rail. During a snow storm, snow tends to build up at the end of the guardrail and creates somewhat of a ramp, he said.

“A car was coming around the corner and hit the end of the guard rail, and it didn’t do any damage to the car and it jumped — I mean they had to have been five or six feet up in the air — and landed and kept driving,” Gangler said. “I didn’t see the car, but I saw where he hit the guard rail, and the car went Dukes of Hazard over the guardrail and back on the road and kept going.”

Gangler said he’s also learned how drivers can better prepare for traveling in the snow. Don’t follow other drivers too closely to provide time to react if something happens, he said, and travel with water, snacks, blankets and road flares — and a full tank of gas if traveling long distance. Most of all, he said, avoid the mentality of trying to get somewhere quick in the snow.

“Be patient with the plows and people working on the road and be mindful and give us plenty of space,” Gangler said. “We are not deliberately trying to hold anybody up. We are just trying to get the snow off the road and make it safe for them.”

The ongoing fight against Mother Nature

The 16-mile commute between Prairie City and the ODOT shop took an hour and a half, but that’s just the beginning of the job, Gangler said.

After plowing the snow, the next priority is to push it back and clear out wide areas for people to pull off and trucks to pull over. The team then places sand on hills, corners and trouble spots to create friction for vehicles. They also make sure that snow banks and other places where snow is stored are under control. The team then makes repairs to snow poles.

When the temperature rises and the snow melts, the focus is on draining the water from the highways.

With so much to do, Gangler is proud of his ODOT team.

“We really do have a hard-working, dedicated crew up here, and I honestly couldn’t have asked for better guys,” he said.

The ride-along ended, but Gangler continued to work until 5 p.m. — when the night crew took over and began their fight against Mother Nature.

"We are fighting against mother nature, and none of us want to get beat."

NH: GOV WILL NOT REQUIRE MASKS AT TRUMP RALLY

Toobin: This is a legal defeat, but practical victory