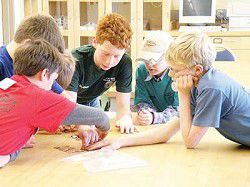 Members of the John Day Teckno Team work on their project for the 2009 Intel FLL Qualifying Tourney in La Grande Dec. 5. 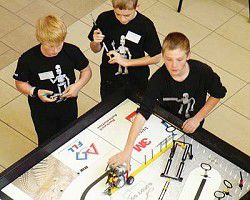 "Robo Clan" from Monument did well enough to compete at the state level in January.

Members of the John Day Teckno Team work on their project for the 2009 Intel FLL Qualifying Tourney in La Grande Dec. 5.

"Robo Clan" from Monument did well enough to compete at the state level in January.

Transportation was the theme for the "2009 Smart Move Challenge," held at Eastern Oregon University in La Grande.

The competition was comprised of three rounds in which the students demonstrated the design and programming for their robot, to accomplish specific missions.

Engle said the students chose "irrigation ditches" as their topic, and studied seepage, evaporation, the impact on wildlife and the growth of debris. She said they even sent out surveys to area ranchers for their project.

Their conclusion was that underground piping, while not financially the most feasible, would be the best solution overall, Engle added.

She said the group chose to address ways to prevent car accidents in Grant County as their topic. As part of their presentation, they performed a skit of a courtroom scene, where the accident victim and the defendant told their sides of the story.

Springer added, "There were some bumps with the robot, and the kids just picked themselves up and kept trying and working at it. "

The state competition will be held Saturday and Sunday, Jan. 16-17 at Liberty High School in Hillsboro.

'It's too late for me': Why dying veteran fights to end military burn pits