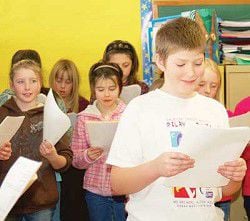 CANYON CITY - School wasn't in session Jan. 19 due to the Martin Luther King Jr. holiday, but as students in Pam Minster's fourth-grade class returned to Humbolt Elementary School the next day they began a week-long study of the man who once said, "I have a dream."

Making the holiday even more meaningful, they also learned about the new president, and the first black president, Barack Obama, and watched part of the Inaugural event Jan. 20 while they ate cinnamon apple sponge cake with caramel sauce - the dessert was also on the Inaugural Luncheon menu.

The group sang the gospel song "We Shall Overcome," which was also an anthem of the U.S. civil rights movement.

" ... Black and white together now, Oh deep in my heart I do believe, We shall overcome someday. ..."

Kienzle spoke of the courage King had to stand up for his beliefs.

Another song she introduced, "United We Stand" was presented by the songwriter René Boyer at the recent Oregon Music Educators Conference which Kienzle attended with two of her students.

She described Boyer as a dynamic black lady who also is a co-writer of the music book the students study in her class. Boyer is a music education professor at the University of Cincinnati.

The students sang each phrase after their teacher:

The song, Kienzle told her students, carries Martin Luther King's message, and the words "yes we can" were used as a theme in Obama's speeches as he campaigned for the presidency.

She said the idea is that "if you can be part of a team, you might be stronger and get that goal accomplished."

"It doesn't matter if your parents voted for Obama," she added, or if you agree or disagree with his ideas, "What happened yesterday was historical. It's going to be in the history books."

One student said she'll be able to tell her children about it one day.

It spoke of King's dreams: "That my four little children will one day live in a nation where they will not be judged by the color of their skin but by the content of their character."

And it spoke of bad dreams: The separation that existed between black and white people at swimming pools, parks, movies and buses.

Many of the words they read were quoted directly from King's "I Have a Dream" speech given Aug. 28, 1963 in Washington, D.C. - including the ending:

"Let freedom ring! ...when we allow freedom to ring, when we let it ring from every village and hamlet, from every state and every city, we will be able to speed up that day when all God's children, black men and white men, Jews and Gentiles, Protestants and Catholics, will be able to join hands and sing in the words of that old Negro spiritual, Free at last! Free at last! Thank God almighty, We are free at last!

Tapper to Jill Biden: Is Joe ready to debate Trump?

This is what Trump said about Obama paying taxes