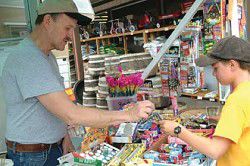 <I>The Eagle/Tina Cook</I><BR>Terry Sowa, project chairman for the John Day/Canyon City Lions Club, sells fireworks to Andrew Kilby, 9, of Monument. "I like the kind of firework you pull on both sides because you can scare people with them," Andrew said. 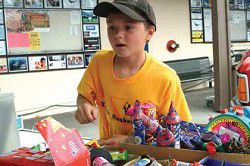 <I>The Eagle/Tina Cook</I><BR>Terry Sowa, project chairman for the John Day/Canyon City Lions Club, sells fireworks to Andrew Kilby, 9, of Monument. "I like the kind of firework you pull on both sides because you can scare people with them," Andrew said.

What's the hottest selling firework in Grant County? According to Terry Sowa, who was manning the John Day/Canyon City Lions Club fireworks stand last week, there are two.

"The ground-blown flowers and singing roses are by far the biggest sellers," said Sowa.

"It's a lengthy process because we have to have our permits by March," he said.

The Lions Club is a non-profit organization that contributes to the youth and community in many ways. The proceeds from the fireworks stand, the main fund-raiser of the year, goes to projects such as sending 4-H kids to camp and helping to purchase glasses for the needy.

"Our primary mission is sight and hearing," Sowa said.

Prairie City's fireworks stand proceeds also are used to contribute to local youth and the less fortunate. The stand is run by members of the Assembly of God Church in Prairie City.

Franklin Tucker had the first shift the week before the Fourth. He said so far sales were slow and the smaller fireworks were selling best.

"They don't buy the larger stuff until the last day," Tucker said.

The fireworks stand is the main fund-raiser for the church. The money is used to send local kids to camp. Any remaining funds are given to missions.

Fireworks can only be purchased by people 16 and older, unless they are accompanied by an adult, but that doesn't stop kids from trying.

"I have to turn them down, but kids under 16 can buy fun snaps and all the smoke products," Tucker said. "Just nothing that you have to light."

Both Sowa and Tucker said the business of selling fireworks usually starts out slow and then picks up as the day of celebration nears.

"It gets progressive. It starts out really, really slow and then the last three or four days get really hectic," Sowa said.

Fireworks are a traditional way for local folks to celebrate, but officials remind users that fireworks are illegal on public lands, including the state parks and national forests.