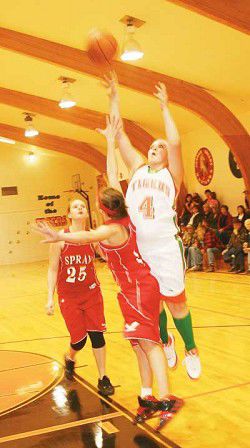 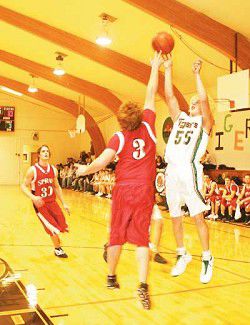 LONG CREEK - Matthew Martin made the shot of a lifetime last week.

The Tigers had hit two free throws with less than five seconds remaining in the game to take a 61-59 lead.

Mountaineer coach Kelly Brown called a timeout following the free throws and the team drew up a plan. Tommy Whit inbounded the ball under his own basket and hit Matthew Martin with a pass. Martin went to his right before two Tiger defenders forced him towards the left sideline. Martin threw up a shot from nearly 10 feet behind the half court line and the ball went through the net, just glancing the iron to give Long Creek the win.

"We put the press on them and made up nine points and went up by two," Monument/ Dayville coach Ron Schafer said. "Then he just hit that amazing shot. It was a hard-fought game. It was special. Several spectators told me it was one of the best games they had seen."

The Tigers made mistakes early in the game that put them in the tight position late in the game. The team missed several easy shots in the game.

Monument/Dayville didn't have any better luck against Spray the day before. The Eagles beat the Tigers 54-43. Monument/Dayville pulled ahead in the first half, but allowed Spray to take an 11-point lead which it held for the remainder of the game.

The Tigers and Eagles got even scoring out of their two top scorers. Monument/ Dayville's Justin Larson led the team with 20 points while Kyle Hand had 14 points. Spray's Joseph Fischer had 19 points and his brother Josiah had 15 points. However, Spray was able to get more points from their secondary players.

"Spray is a good, well-coached team," Schafer said. "We really played hard, but we came out behind. They have a lot of experience and that's something we don't have."

The Tiger girls fared as well as the boys did against Spray. They fell 43-25 to the Eagles.

The normally shorthanded Tigers had an even smaller team due to the absence of Mary Cade. Cade suffered a concussion during Monument/Dayville's Jan. 17 meeting with Harper. She is expected to return for the 6 p.m. Friday, Jan. 30 game against Prairie City in Monument.

The Tigers' six players hit fewer points each quarter, as they tired.

They scored 11 in the first quarter, seven in the second, four in the third and three in the fourth.

"I?think what we tend to do is relax and don't put the ball up hard when we're down low," Retherford said. "We're not finishing shots. We play pretty good defense and get our own shots, but don't finish."

Trump mostly in seclusion during final days of presidency

Why Black voters are hopeful for change under Biden administration