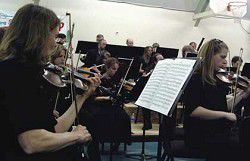 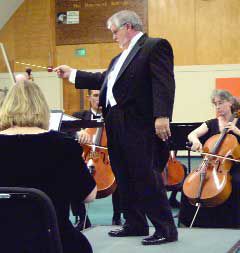 MONUMENT - The conductor was energetic, and the music was full of life as the Inland Northwest Orchestra played to an appreciative audience of more than 100 people inside the comfortable confines of the high school gym.

The school has had acoustic problems in the gym, but none were apparent May 13, when the orchestra played Beethoven's "Symphony No. 2" and Krommer's "Concerto for two Clarinets," at least that was what was on the program.

My experience listening to orchestras play classical music is limited. I've been to two concerts, both in Grant County. So when I say after the first piece, which had four parts - I think it was Beethoven, all muscular and demanding - that my tin ears were massaged with dreams, you'll have to consider the source.

When the conductor, R. Lee Friese, put down his baton, I said, "Wow," and a woman down the row smiled at me and said, "Yes," and we burst into applause with the rest of the audience.

The centerpiece, and the highlight, was the two-clarinet thing. Fanny Fitzgerald and Roger Garcia trilled like song birds, hitting notes that were "absolutely magical," according to Jill, my wife, who knows about such things, and often sneaks more refined CDs between the old Cream, Waylon Jennings and Pussycat Dolls I blast from the stereo. I'm learning.

"That was big sound," Andy Schutz said during intermission.

At the reception afterward, which featured fancy wraps and dainty egg sandwiches, Scott Langkamp, the school superintendent, said, "I loved it."

The evening was sponsored by several local businesses and individual music lovers, enough to take up almost a whole page in the program.

MA:CLIMATE BILL AIMS FOR NO GAS VEHICLES IN 30 YRS

Trump has made many, many health care promises (2019)