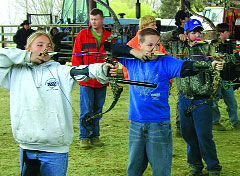 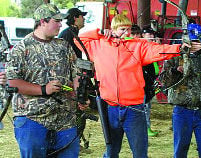 The archery season, which started in November, wrapped up April 22 and Monument Coach Brian Woodell said he was pleased with his team's efforts.

Final results will not be known for a while, as the 4-H Club sorts out all competing teams mail-in scores.

"It's been a joy seeing the kids progress," said Woodell. "They've done very well and they encourage each other. And, of course, they compete against each other as well."

Woodell's top four competitors for most of the year have been Jake Hyder, Laura Verstoppen, Riley Cade and Brad Woodell. After the latest 4-H postings two weeks ago, all four were first in state in their age groups.

Hyder is in the 11th grade.

"Jake has been in our club three years," said Coach Woodell. "He's always been competing in the oldest group. To be good, it takes form and concentration and you have to have your body built up. He's got it all together."

Verstoppen, a ninth-grader, has been No. 1 in the state for the past two years. And, no, there is no separation in competition amongst girls and boys.

"I think she likes that part of the challenge," said Woodell. "She's always practicing."

Cade is in the eighth grade.

"Riley joined us mid-year and he didn't know anything," said Coach Woodell. "And now he's No. 1 in the state."

Brad Woodell is in sixth grade.

"He's been shooting since he was 3-years old," said Coach Woodell. "He just loves it."

Biden's HHS secretary pick: The plane is in a nosedive