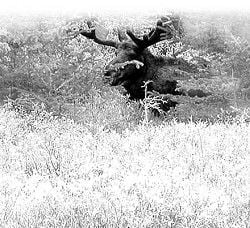 ENTERPRISE - Wildlife biologists collared four moose in the northern Blue Mountains of Wallowa County in January 2008, marking the first collaring of the animals in Oregon and an increased effort to trace moose activity in the state.

The radio and GPS collars will help biologists better understand seasonal movements, habitat use, and reproductive rates of the state's small but growing moose population, which is conservatively estimated to number 35.

The four moose collared were cows; high winds prevented biologists from also collaring an adult male. The team will try again later in the winter, in time to track a bull's movement during the September breeding season, when they tend to move great distances.

"It's exciting to have these majestic newcomers in Oregon, and I believe our moose numbers will only grow," said Pat Matthews, ODFW assistant district wildlife biologist." There is a sizeable amount of vacant habitat for them to pioneer. I think we could realistically see a population of 500-700 moose in Oregon in the future."

Two of the collars used were GPS satellite collars that emit several readings a day to indicate their location. The other two were more conventional radio collars which emit a particular radio frequency that is located by biologists with a receiver. Biologists will use these collars to get a sense of the moose's range and location but will also be observing the animals up close to keep an eye on their condition.

As the moose population grows, limited hunting opportunities could occur in northeastern Oregon. Moose tend to be solitary creatures that use thick cover, making viewing them a challenge. Sightings most often occur in the Umatilla National Forest north of Elgin off Forest Road 62 and on Hwy 204 between Elgin and Tollgate.

ODFW officials stressed that it's important to protect Oregon moose because of their low numbers.

Although moose are generally larger, they can be mistaken for elk, so hunters in the area need to take extra care to identify their target before shooting. Hunters or others that encounter moose should report sightings to a local Fish and Wildlife office so the department can continue to understand the animal's range in Oregon.

In the collaring operation in January, the moose were first captured with a helicopter and net gun operated by Leading Edge Aviation of Clarkston, Wash. Funding for the collars and project was provided by the Umatilla National Forest, Oregon Wildlife Heritage Foundation; Confederated Tribes of the Umatilla Indian Reservation; Blue Mountain Habitat Restoration Council; and the Josephine, Yamhill, Capitol, Lincoln, Pioneer, Columbia, Rogue, Baker, and Union Chapters of Oregon Hunters Association.

While moose may have occurred in Oregon in the past, there are no references to them being found here in modern times. The moose established in northeastern Oregon today are naturally dispersing into the state from adjacent Washington and Idaho. In 1922, five moose were brought to western Oregon from Alaska. These animals were hand-raised and soon became a problem to towns and farms, so the transplant failed.

"The first sighting of a moose that we know about was in the 1960s along the Snake River," noted Vic Coggins, ODFW district wildlife biologist. "Individual moose have been observed sporadically in northeastern Oregon over the past 40 years."

As North America's largest ungulates, the moose's size and the male's uniquely-shaped antlers give it much of its mystique. Moose prefer the habitat of burned and logged areas with an abundance of willow and other deciduous growth. Temperature is probably the limiting factor in their expansion.

Pelosi: Manchin left door ajar on HR1 and I'm not giving up

Pennsylvania lawmaker to GOP: 'Are you not 100% White?'