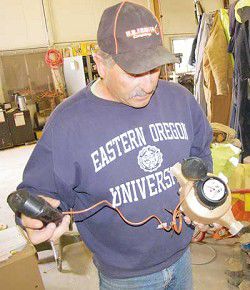 <I>The Eagle/David Heldreth</I><BR>Monte Legg checks the wiring for one of the new city water meters. 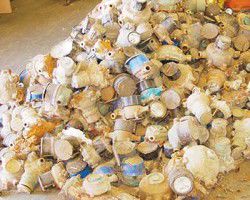 The city has a pile of old meters ready for recycling.

<I>The Eagle/David Heldreth</I><BR>Monte Legg checks the wiring for one of the new city water meters.

The city has a pile of old meters ready for recycling.

JOHN DAY - John Day residents may notice a few changes in their water services this winter.

Many households may see a slight increase in monthly bills, in part due to the installation of more efficient water meters. The John Day Public Works Department recently finished installing new meters - 800 of them - throughout the city. The project took around a year to complete.

John Day water systems operator Monte Legg said the new meters are 10 to 20 percent more accurate than some of the older meters.

"Some of the meters we replaced were up to 30 years old," Legg said. "The usual life span is around 20 years. The difference is that the bills would be lower before and higher now."

"We've been getting some calls about the bills and have had public works go out and check to make sure everything is working right and measuring correctly," Gray said. "So far the new meters are right, but people are used to the bills from the old meters."

Although the meters may mean some higher bills, they also are programmed to pick up leaks in a household water system. If a meter detects water flowing for 24 hours or more, it alerts the city crews who monitor the system.

Residents also won't see public works employees walking into their yards to check the meters anymore. The new meters include a battery-operated transmitter that sends out a signal which is read by a laptop. The batteries last 20 years and the signal can be picked up while driving by at the normal speed of traffic.

Readings that in the past would take an employee up to a week to complete now take around a day. The new meters will also save the city time because they won't have to remove and replace insulation each spring and fall. Until this year workers would remove insulation in April and would read meters until the end of October when they would reinstall insulation for the winter. The process would take around two employees around two weeks each spring and winter.

Households would be charged a minimum bill of $52 from October until April and then be charged for overages in April. Residents will now get billed for what they use each month.

Gray said the new system will help the city plan water use.

"It's better people can pay for what they use and not have to worry about overages in April," Gray said. "It also helps us as a city because we don't have to approximate usage as much."

Legg said the new system will free up workers for other projects.

"As a water systems operator I can focus more on getting more done," Legg said. "I can take more time to monitor the water system on a daily and weekly basis. It also helps because everything requires less people so they can get out on other projects."

Legg also said the installation was a team effort.

"We couldn't have done our part of the job if the other public works guys didn't pick up the slack and get everything else taken care of," Legg said. "The city's office staff people were great in getting all the billing software and the laptop ready. It was the whole city staff involved on this."