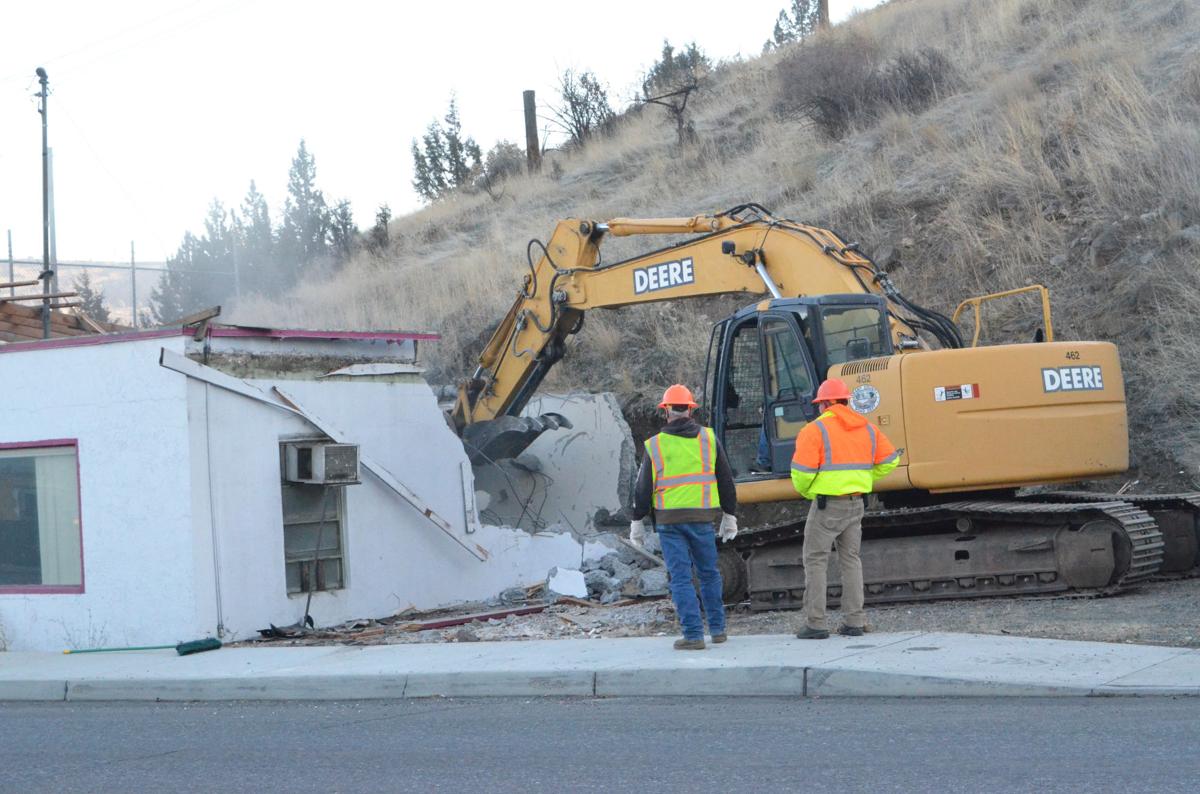 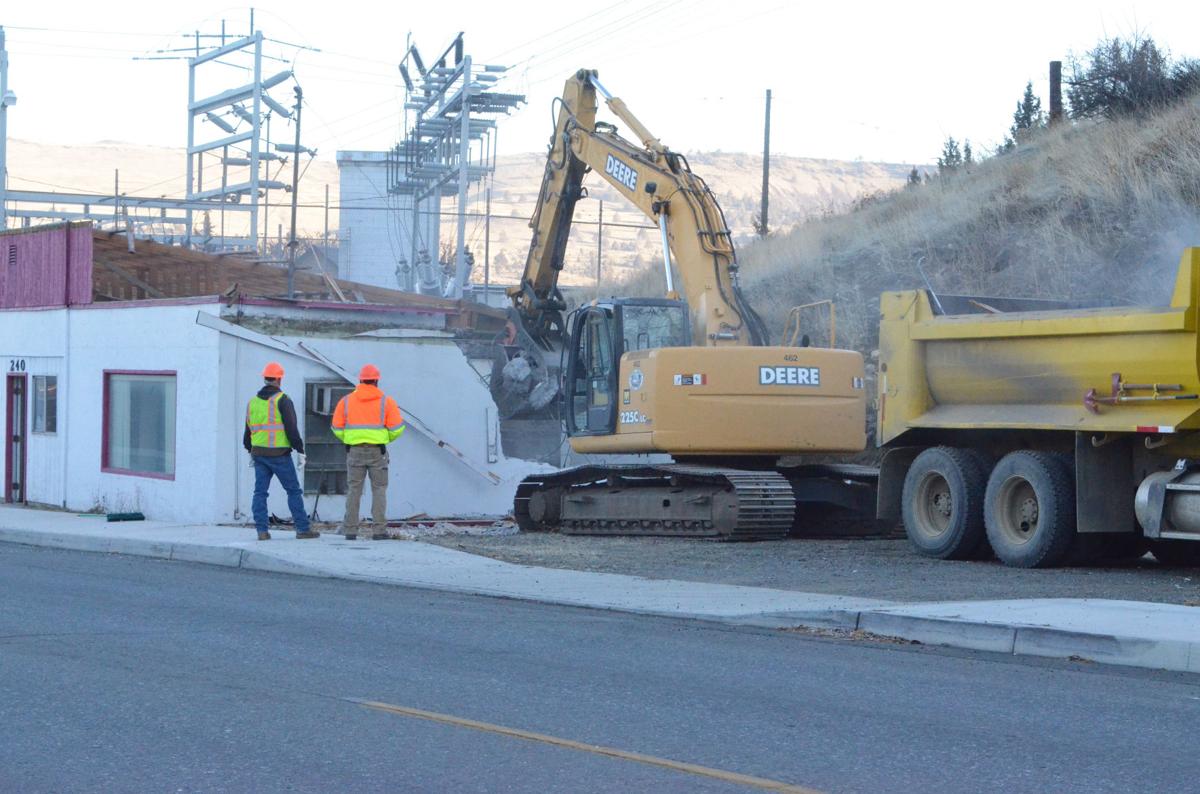 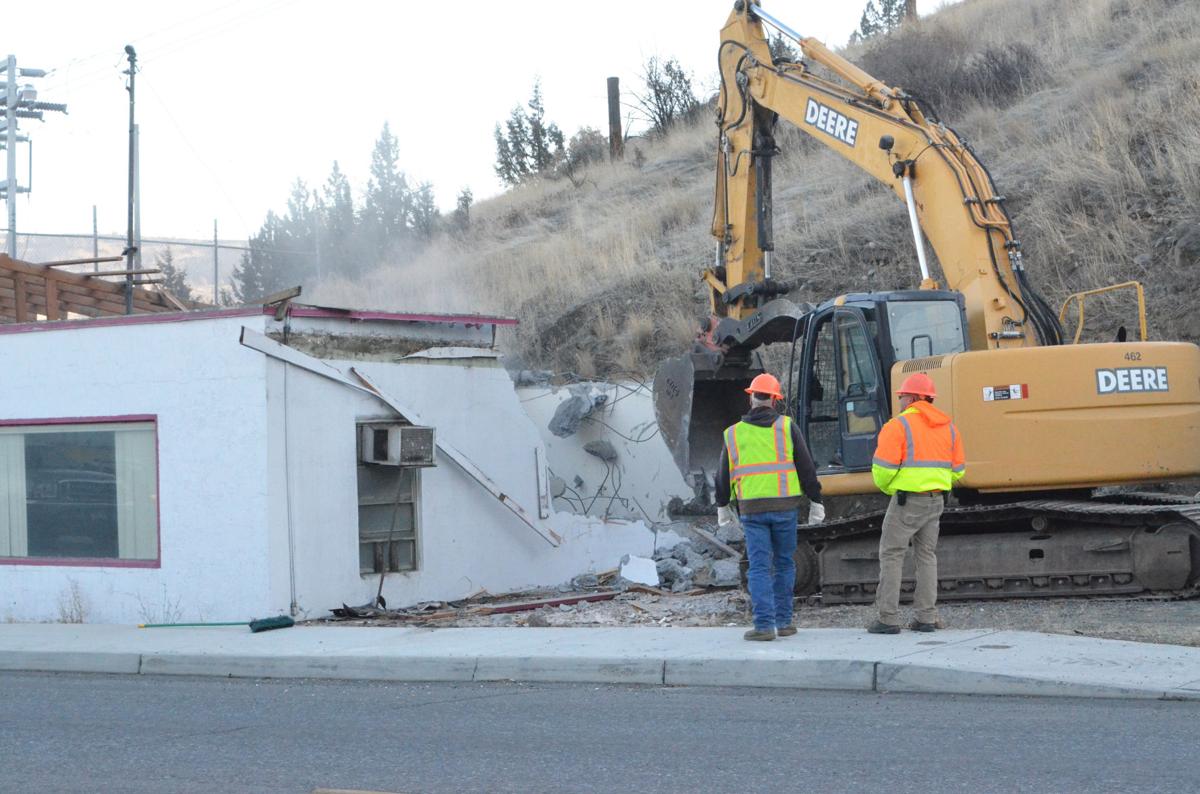 John Day's old city hall building is being demolished. Plans call for a pocket park at the site.

John Day's old city hall building is being demolished. Plans call for a pocket park at the site.

A piece of John Day history disappeared Monday, as a crew from the Grant County Road Department demolished the old city hall building on South Canyon Boulevard next to the Oregon Trail Electric Cooperative substation.

OTEC needs better access to the substation should a large piece of equipment fail and require replacement. Preliminary plans call for turning the narrow site between the highway and a steep embankment into a pocket park, according to Charlie Tracy, OTEC director of engineering and operations. OTEC is also exploring options for an electric vehicle charging station at the site.

Demolition began at the south end of the former city hall building, which once housed the city jail. The shovel of a large excavator banged into the reinforced concrete roof of the jail with a loud bang again and again in an attempt to break it into smaller pieces.

While the police and fire departments were housed on the north side of the electrical substation on Dayton Street, the old city hall was home to the administration and the public works department, with no room large enough to hold city council meetings.

The city initially proposed constructing a new city hall at a site on West Main Street, but an $800,000 bond election was soundly defeated in November 1985 by 377-121.

The next plan was to acquire the Grant County Federal Credit Union building on East Main Street and remodel it to accommodate city administration, police and public works, along with a public city council meeting room.

“It’s probably one of the worst-needed things in John Day,” Ralph Hunter, the mayor at that time, said. “I’m really pleased the people finally approved it.”

By coincidence, that same week residents in Mt. Vernon got a first look at their brand new city hall, fashioned from a mobile home at a cost of $28,750.

City government moved into the current John Day City Hall on the weekend of Feb. 3-4, 1990. In an op-ed piece in the Eagle, city staff explained why the transition took so long after the 1987 levy passed.

The credit union had been given until April 1989 to complete its new building and move into it, city staff said, but the “minor remodeling” expected at the former credit union building turned out to be much more extensive. Facing numerous changes to meet code, the city finally hired an architect to assist in the project.

CA: MALL SHTG/VICTIMS' FAMILY: THIS HAS GOT TO STOP