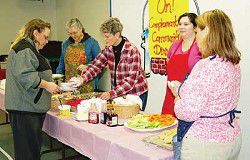 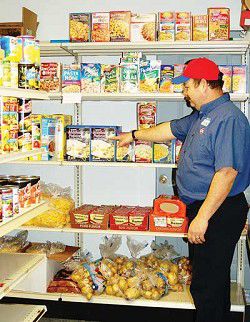 <I>Eagle photos/Cheryl Jessup</I><BR>Organizer Pete Teague checks the stock on the shelves of the new food "store."

<I>Eagle photos/Cheryl Jessup</I><BR>Organizer Pete Teague checks the stock on the shelves of the new food "store."

PRAIRIE CITY - Although the turnout for the evening was on the light side, the food and helpful volunteers were plentiful last week as a new food bank and community meal premiered in Prairie City.

The staff from Prairie Baptist Church, who are running the new food programs in the Teen Center on Front Street, reported that 11 families were served with goods from the food bank shelves. About 26 people ate and socialized at the free "Soup's On Complimentary Community Meal."

Those who came for the food bank first signed up, with help from church members. Then they were accompanied by church staff into the food bank "store" and assisted with "shopping" for items of their choice. Able-bodied helpers were on hand, if needed, to get the heavy boxes and bags out to patrons' vehicles.

The pantry shelves were fairly full already with canned, packaged and frozen food, most of it donated by the community or purchased from the U.S. Department of Agriculture (USDA) with monetary contributions. And more food is on the way, according to program organizer Pete Teague.

The menu for the "Soup's On" dinner included chili and potato soup, three choices of bread, carrot and celery sticks, cookies and a variety of hot and cold drinks.

The food bank welcomes donations of food and money. As little as $1 will purchase about six pounds of food through USDA, according to Tonya Wood of Prairie Baptist Church.

The food bank and community meal will continue monthly, from 5 to 7 p.m. on the third Tuesday. For more information, call Prairie Baptist Church at 820-3696.

This is how Biden says he'd fix the health care system