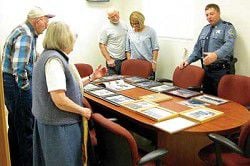 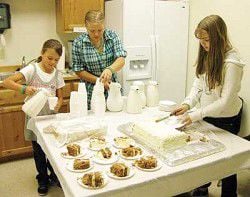 Above, from left, Madison McKrola, 9, Hannah Brandsma, 14, and Kristen Hale, 10, visiting from Portland, serve cake and coffee to visitors at the new OSP John Day Outpost. Cookies and lemonade awaited guests at the Extension office.

Above, from left, Madison McKrola, 9, Hannah Brandsma, 14, and Kristen Hale, 10, visiting from Portland, serve cake and coffee to visitors at the new OSP John Day Outpost. Cookies and lemonade awaited guests at the Extension office.

OSU Extension moved from its longtime location in the Grant County Courthouse back in July. Two new signs from Nomad Signs now herald their new home.

Across Main Street is the new Oregon State Police building.

OSP's new location has an entry and reception area; offices; rooms for report-writing and evidence storage; a conference and training room with one-way glass; storage space; a garage which also houses defensive tactics training supplies and a poaching locker; and an enclosed parking area in the back.

According to Sgt. Gordon Larson, the OSP previously had to rent space around town for some tasks. Now everything can be done onsite.

"Our new facility enhances our ability to serve the community," said Larson. "It's just more professional."

He said that transition is nearly complete, with just a few more supplies still to move over from the old office.

"We are grateful to have this new facility, for us and the community," he said.

OSP made the move in August from their old quarters across town on West Main Street.

Currently at the John Day Outpost, there are three patrol officers, two with OSP's Fish and Wildlife Division and one vacancy.

Of the open house, Larson said, "It was nice to interact with everyone and have people get to see their OSP Outpost."

He added that they were excited about the turnout, about 75 visitors.

He and Trooper Larry Johnson led guides tours through the new building. Lt. Rich Pileggi was also on hand from Ontario for the occasion.

Refreshments were served at both offices, with 4-H'ers serving up the goodies. Hannah Deming and a few helpers escorted people back and forth across the street.

Larson said that the organization of the open house was all Day's idea and hard work. He also expressed thanks to the 4-H'ers for their support.

He shared a card 9-year-old Madison McKrola gave the troopers which read, "Thank you for keeping us safe."

Biden: We cannot, will not let Americans go hungry