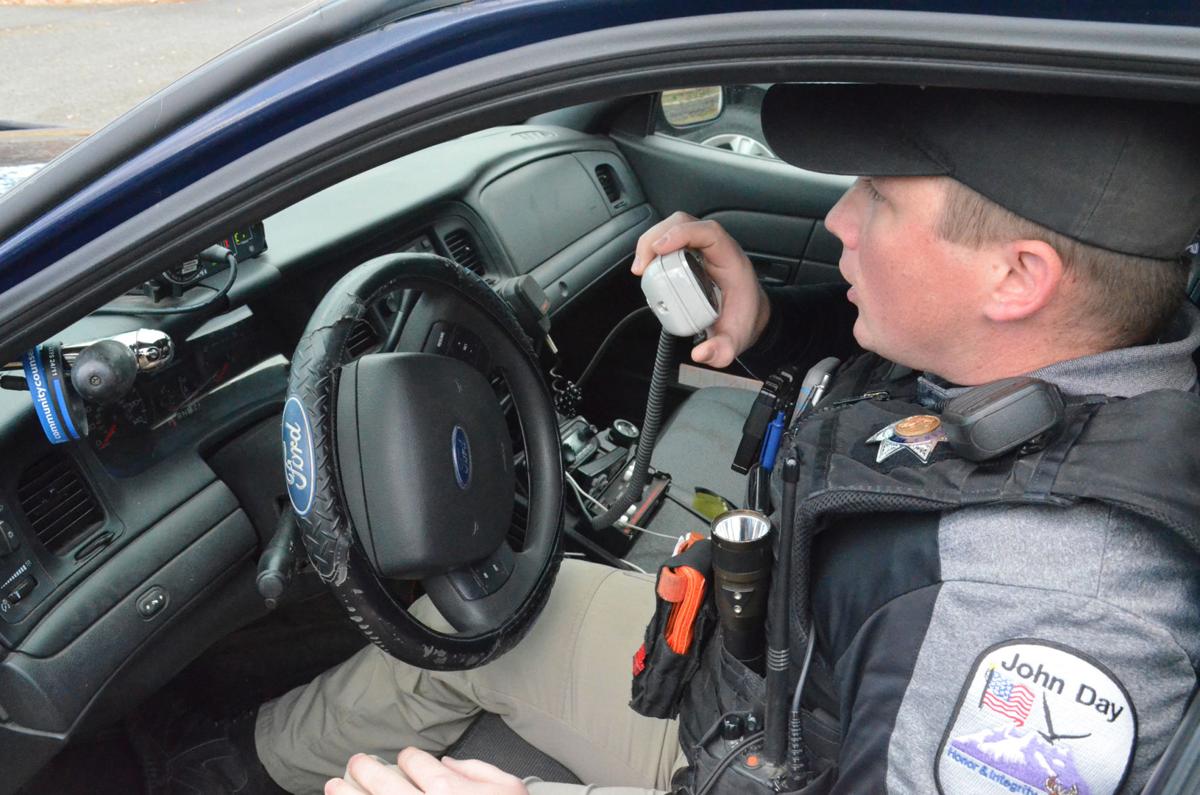 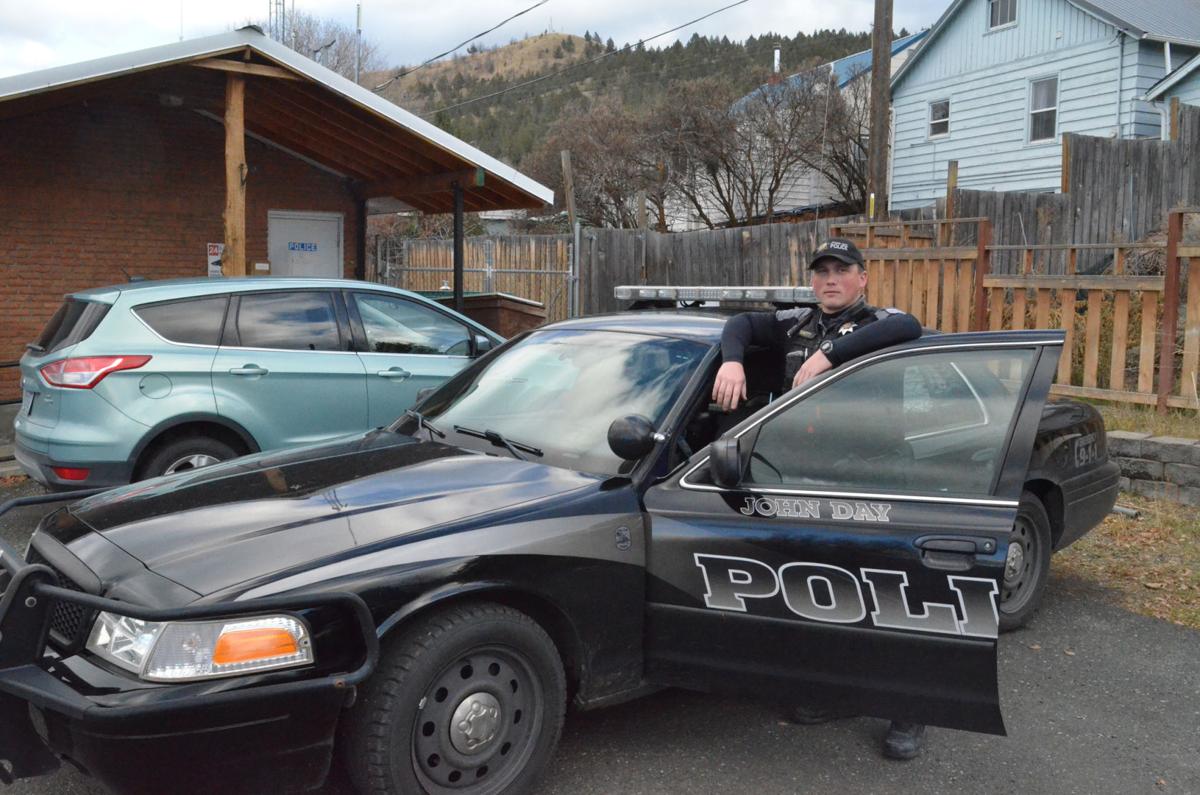 Officer Sam Stinnett has been a part of the John Day Police Department for over a year. 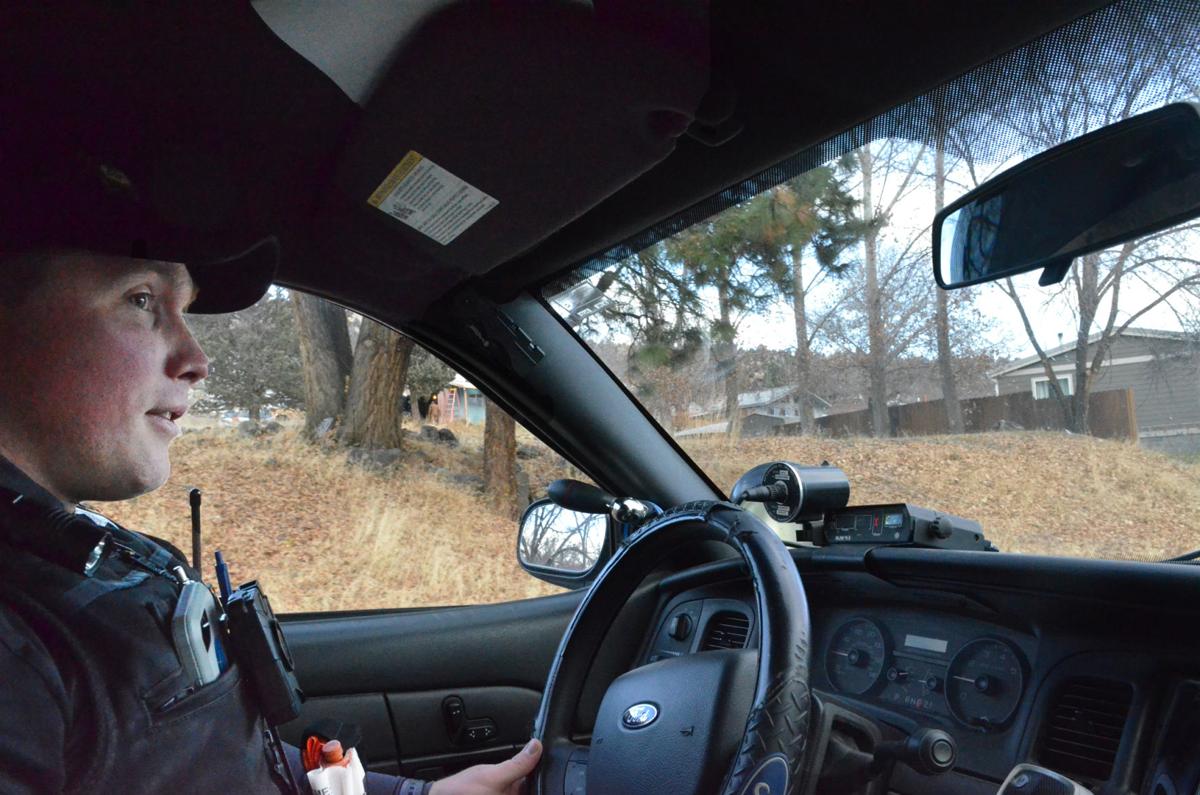 Officer Sam Stinnett patrolling the streets of John Day and looking for any suspicious activity.

Officer Sam Stinnett has been a part of the John Day Police Department for over a year.

Officer Sam Stinnett patrolling the streets of John Day and looking for any suspicious activity.

While 12 p.m. marks the start of a lunch break for many, it marks the beginning of a 10-hour shift for Officer Sam Stinnett. With an energy drink in the console, Stinnett turns his focus to the streets of John Day.

As an officer for the John Day Police Department, he carries out various tasks such as patrolling the streets and taking calls, but anything can happen at any moment.

“You get to work every day, and you got your plan of what you’re going to do throughout your day,” Stinnett said. “About 4 p.m., a call comes in, and we end up heading to the hospital. We were there dealing with the situation until 10:20 p.m. You never know what you’re gonna do.”

During a two-hour ride along with Stinnett, he shared his experience on the force while waving back at the people who gave him kind gestures on the road. Some people smiled at Stinnett, some waved, some gave a one-finger sway with the pointer finger, but no matter the type of kind gesture received, he did his best to return a kind gesture to each person he saw.

He was born in Canyon City and has moved back and forth between Grant County and places like Bend and Idaho, but he always found himself back in the county.

His interest in the legal system started when he worked at the Grant County Jail.

“I found it interesting how the legal system worked because I had never been a part of it,” Stinnett said. “I always said I was never a people person, but working at the jail, you had no options. You had to talk to people there. When I figured I was kind of good at that, the next step was to be in law enforcement and talk to people on the streets.”

He also has friends and family members on the force that motivated him to join. One of the best parts of the job for Stinnett is the opportunity to help people at difficult moments in their lives.

“When we get called, a lot of times people are having the worst day or worst month possible, and it ends with us being called,” Stinnett said.

During his start at JDPD, he received a call of domestic violence. Since he was new at the time and he was told terrible stuff about the situation, he sought advice from Chief Mike Durr and asked for somebody from Oregon State Police to accompany him for the interview.

“There were a lot of crimes that had happened in that household, and we had proof that these crimes happened,” Stinnett said. “I remember we were at the door, we were getting ready to go in. My mind was racing on the scenarios. Does he have a knife? Is he going to open the door? Does he have a gun? Will he take off?”

They knocked on the door, and to their surprise, the suspect let them in with no altercation. They arrested the suspect and then sent him to jail while the victim began a new life out of an abusive relationship that went on for 12 years.

“There is a lot of training we go through for domestic violence because it’s a different mindset that someone gets in,” Stinnett said. “When people say, ‘You should just leave,’ it’s not that simple. For us to get there and help a victim get out of an abusive relationship they can’t get out of themselves is great.”

That was the first case of domestic violence he worked on. He sometime sees the person he helped on that call, and she always gives him a big thank you.

Another part of the job Stinnett enjoys is trying to keep the community clean and keep drugs out. Methamphetamine seems to be the most popular illegal drug in the city, according to Stinnett. While the efforts of JDPD, OSP and the Grant County Sheriff’s Office have made the issue less prominent, it’s still a problem.

In the year and a half that Stinnett has served JDPD, he has dealt with one case of meth.

One of the toughest parts of the job is dealing with people who are in a mental health crisis, he said.

“You have to say things just right,” Stinnett said. “It’s not like someone on drugs or someone who is drunk, but that is why we have have the fantastic people from CCS who can help us out.”

Toward the beginning of his career in the JDPD, they received a call from someone who was attempting to cut their own wrists. Driving to the scene, he was thinking about what might happen. “Hope for the best and expect the worst,” he said.

“We get there and we had already called an ambulance to head up in that direction,” Stinnett said. “The owner of the house opens the door and said, ‘She’s in there,’ and she runs out. The suicidal person had a knife on her, and that right there was a tough situation because she has a weapon but she is not being threatening.”

The officers talked her down and convinced her to drop the knife. She was taken to the hospital, and Stinnett rode in the ambulance with her. They assessed her to see what would be the best way to help her.

“It’s a long process after that experience to get someone healthy,” Stinnett said.

While tough, dark moments can happen while serving in the JDPD, Stinnett makes sure he keeps his sense of humor to continue working with a positive mindset.

“It’s not a requirement, but you need to have a sense of humor because you can go through some dark stuff in this job,” Stinnett said. “You gotta still think positive because otherwise things are just dark and bleak. Dealing with a suicide is a hard thing to deal with, but you gotta stay focused and do your job and do what has to be done.”

As the ride along was ending, nobody was pulled over and there were no calls to report to, but Stinnett expressed his joy in his job and the time he has to serve the community.

“It’s an awesome job with awesome people,” he said. “I’ve lived here forever, and it’s good to see that the county is being upgraded, and I like all the change that’s happening.”