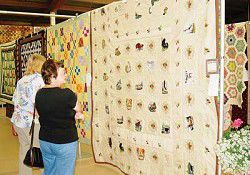 Visitors from across Grant County and beyond took in the vast array of colors and patterns on display at last weekend's ninth annual Grant County Quilt and Art Show.<I><BR>The Eagle/Cheryl Jessup</I> 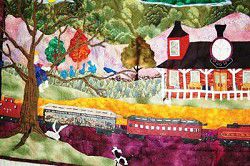 The detailed colors and design of the "Mountain Scene and Countryside" quilt, contributed by Dorothy Tryon, show why it was voted the People's Choice Award on Saturday.<I><BR>The Eagle/Cheryl Jessup</I>

Visitors from across Grant County and beyond took in the vast array of colors and patterns on display at last weekend's ninth annual Grant County Quilt and Art Show.<I><BR>The Eagle/Cheryl Jessup</I>

The detailed colors and design of the "Mountain Scene and Countryside" quilt, contributed by Dorothy Tryon, show why it was voted the People's Choice Award on Saturday.<I><BR>The Eagle/Cheryl Jessup</I>

JOHN DAY - Quilted banners up and down John Day's Main Street and huge quilts suspended outside the fairgrounds pavilion heralded the colorful display within, as the ninth annual Grant County Quilt and Art Show came to town.

The event, held Sept. 19-21, featured the talents of local artists and quilters.

All quilts were welcome: all shapes, patterns, styles and sizes; handed-down treasures; newly-stitched masterpieces, and yard-sale finds - All were "stars" for the weekend.

A trio of sisters, Zola Pike, Tami Gould and Kristie Bobbitt, were the featured quilters for this year's show.

The ladies of "The Sister Act" shared their sewing experiences and answered questions about their quilts.

The rhythm of their stitchwork continued, though they willingly stopped to explain or show off a particular quilt or pattern for passersby.

On being the featured quilters for the show, Pike said, "It was fun and relaxing. We enjoyed looking at all the other quilts."

Pike lives in John Day, while Gould and Bobbitt are from Salem.

The sisters said they acquired their sewing skills at an early age, at their grandmother's knee, learning not only sewing, but knitting, crocheting and other types of needlework,too.

Those attending were asked to vote for their favorite quilts in the People's Choice Awards given out each day of the show.

Bobbitt's "Alphabet Quilt" won the People's Choice Award on Friday. As to the background or history of the quilt, she wrote that she made the quilt "during a long January while our home was being built."

Dorothy Tryon's "Mountain Scene and Countryside" quilt won the award for Saturday and a quilt made from 30s-style prints by John Day resident Carol Roe won on Sunday.

Diane Higbie, who has been quilting just since 2001, organized the show. She said the event was very successful this year and she hopes "we can expand on it more and more each year."

"This can be quite an 'event' for the whole community, as we continue to draw crowds from outside of the area," she said.

In addition to the show itself, Higbie scheduled three workshops for Saturday too, more than in previous years.

One session on quilt binding was cancelled due to lack of interest. However, the other two - "needleturn appliqueing" and "jean circle quilting" - were well attended, Higbie said.

She added that it was great to see people come to learn something new and then "take the technique and make it their own. That's the exciting part."

The featured artist this year was Sharon Schultz. Dozens of Schultz's rich oil paintings were displayed in the spotlight at one end of the pavilion.

Shcarol's Catering kept hungry patrons satisfied with a gourmet lunch and desserts throughout the day.

Also on hand were vendors including Lou's Heartfelt Quilting from Mt. Vernon and Marilyn's Pickets and Patchwork from Nyssa.

About 350 people were reported to have attended this year's show.

Tapper: I wish I saw evidence these people had a conscience

An abused boy is saved by a note from a waitress