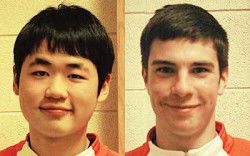 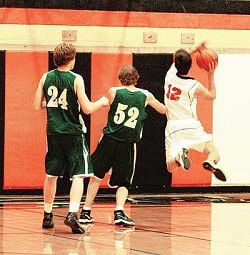 Brady Doty (No. 12) goes airborne to make the shot in the Prairie City boys game vs. Adrian last Friday.<I><BR>Eagle photos by Cheryl Jessup</I>

Brady Doty (No. 12) goes airborne to make the shot in the Prairie City boys game vs. Adrian last Friday.<I><BR>Eagle photos by Cheryl Jessup</I>

PRAIRIE CITY - Despite some hard running and tough playing on the home court, a league win still seems to be elusive for the varsity Panther boys.

The had their closest game so far against Mitchell Dec. 8, falling short with a score of 51-56.

In the Adrian game, Prairie City was down by only two points, with the halftime score at 17-19.

Coach Darren Lemon said, "The team has done an excellent job on defense and all the way around."

Of Friday's game, he added, "That night was probably the most enthused crowd there has been in a long time."

He said the team used that enthusiasm and excitement to their advantage and to play hard.

"But we just couldn't bridge the gap."

Coming up for the Panther boys: the Dayville Tournament Friday and Saturday, Dec. 18 and 19.

Meet the trailblazing Black woman scientist behind a Covid-19 vaccine