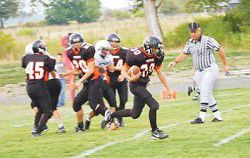 <I>The Eagle/David Heldreth</I><BR>Prairie City's Sawyer Schulze makes a run for the end zone during the Sept. 19 game against Huntington in Prairie City. 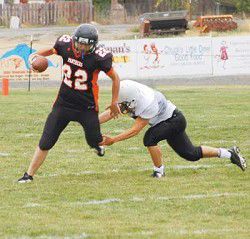 <I>The Eagle/David Heldreth</I><BR>Prairie City's Brandon Crisler breaks a tackle on the opening kickoff of the Sept. 19 game against Huntington in Prairie City.

<I>The Eagle/David Heldreth</I><BR>Prairie City's Sawyer Schulze makes a run for the end zone during the Sept. 19 game against Huntington in Prairie City.

<I>The Eagle/David Heldreth</I><BR>Prairie City's Brandon Crisler breaks a tackle on the opening kickoff of the Sept. 19 game against Huntington in Prairie City.

The Panthers put the ball into the hands of seven different players on offense during their 68-0 win against Huntington Friday, Sept. 19. Every Prairie City player that touched the ball on offense was able to put points on the board. Brandon Crisler, Dylan Hendriksen, Colton Schulze, Orin Wood, Brady Doty, Sawyer Schulze and Derek Kell each took the ball into the end zone.

Colton, who was back from a shoulder injury he received against Mitchell/Spray Sept. 12, was the only one earning his points on a two-point conversion rather than a touchdown.

Sawyer said he enjoyed getting to play some time at the varsity level.

"It felt pretty good to be able to play and get carries," Sawyer said. "We haven't had any JV games yet so it was neat to get the experience."

Prairie City took control in the opening seconds of the game. Crisler ran for a 48-yard touchdown with 11:38 still remaining on the clock. He added two more touchdowns within the next three minutes to put the Panthers up 28-0. Hendriksen helped out with a 1-yard touchdown run in those opening minutes.

The Panthers kept the offensive pressure up and led 46-0 with more than three minutes left in the first half. The large deficit allowed for a running clock and the first half ended quickly.

Prairie City shared responsibilities on defense as well as offense and the entire team saw playing time in the game. However, the Panthers defense remained strong throughout the game. They didn't give up a single first down until the final drive of the game and never allowed the Locomotives to cross the 50-yard line into Panther territory.

Huntington's offense ended the game with 10 yards and were often going backwards. The Locos lost yards on 11 plays.

The physical play of the Panthers forced five fumbles, which were all recovered by Prairie City, and an interception. Justin Gillihan recovered three of the fumbles and Doty grabbed two loose balls. Doty also picked off the pass and returned it to the one-yard line to set up the final Prairie City touchdown.

The Locos are now 0-4 in the first season they haven't partnered with Harper. The team is also comprised primarily of foreign exchange students. They have 14 exchange students on the team from 12 different countries including Mexico, Japan, Brazil and Denmark.

"The first time these exchange students ever saw a football field was when they joined the team," Young said. "They're learning and picking things up quick, but it will take time."

Joe Biden sworn in as 46th president of the United States