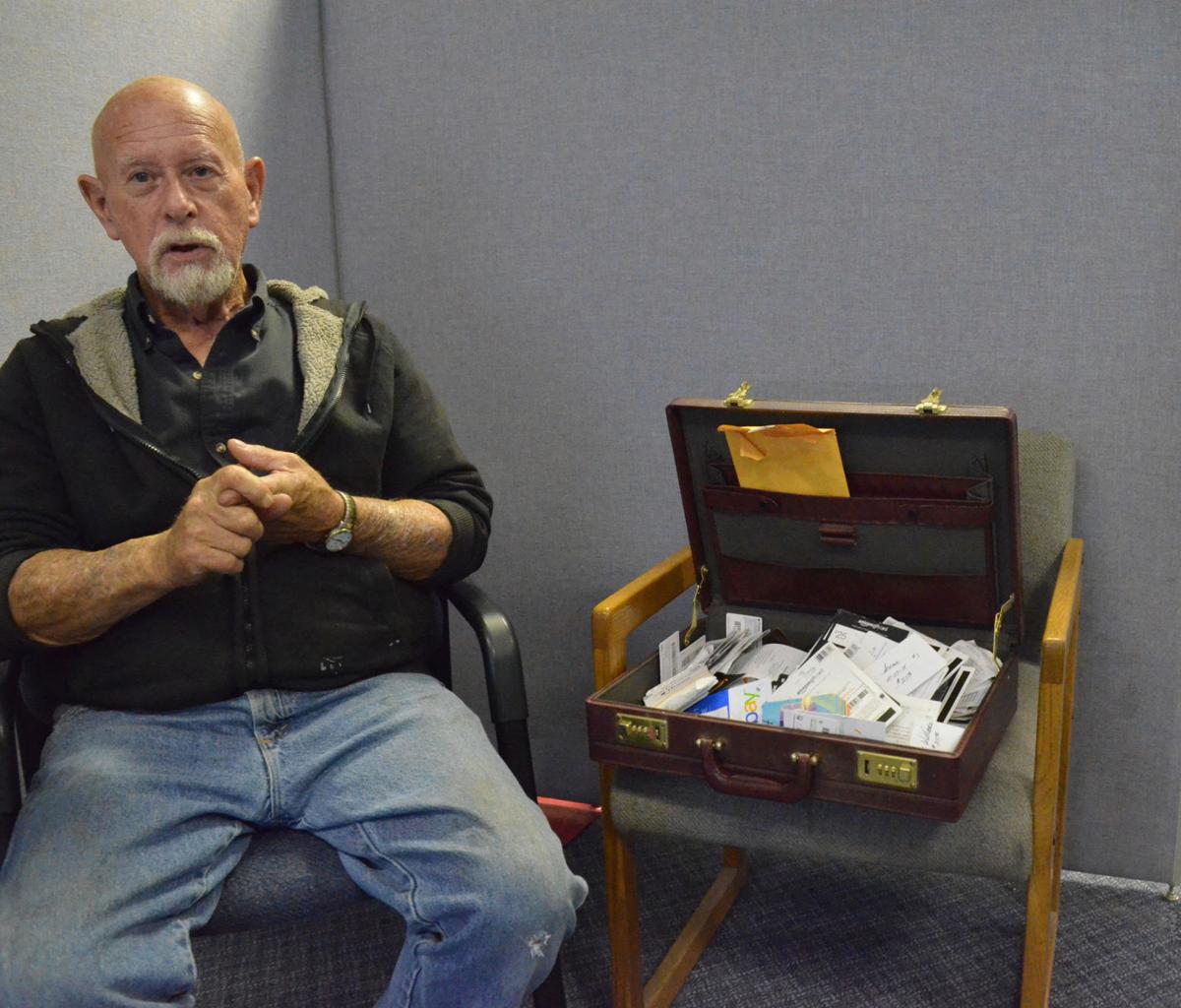 Carl Kalteich talks about the various gift cards he bought for scammers. 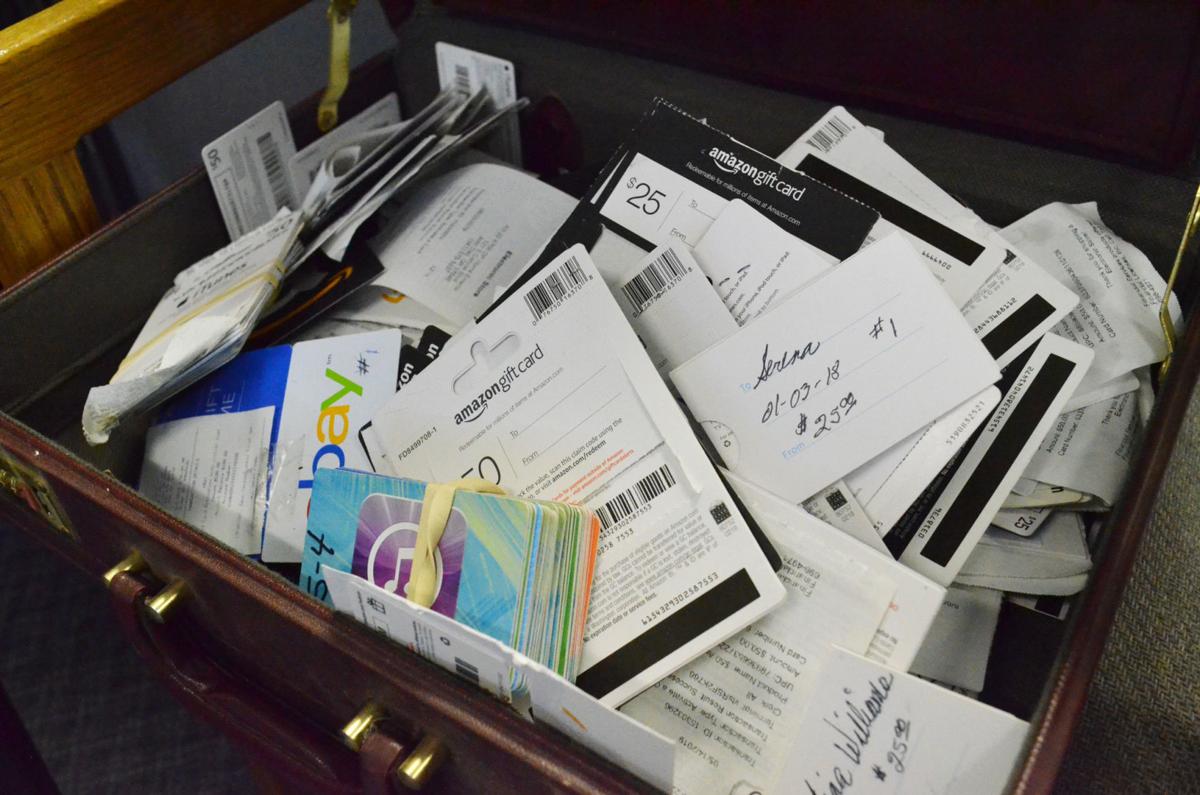 A briefcase full of used gift cards Carl Kalteich sent to scammers. He would take a picture of the code on the back of the gift card and send the image to the person he was talking to.

Carl Kalteich talks about the various gift cards he bought for scammers.

A briefcase full of used gift cards Carl Kalteich sent to scammers. He would take a picture of the code on the back of the gift card and send the image to the person he was talking to.

What began as an enticing conversation with an unknown phone number ended in deception, hundreds of gift cards and over $25,000 stolen.

Carl Kalteich, 75, of Dayville has been a victim of fraud and has been chasing lies for over four years.

“I was vulnerable,” Kalteich said. “I’m a lonely man, and I don’t like being alone. These scammers got into conversations with me. They pretend to be women, since some of them are men, and they will sweet talk you and tell you how much they love you. That is when they hooked me, and I was stupid enough to give my bank account numbers so I could deposit checks they sent me.”

Every check he received from the scammers was voided, and he was left on the hook for the funds.

The scams began with a text message Kalteich received from an unknown number. The message announced that he won thousands of dollars and could claim the money if he paid a $900 delivery fee and gave his card number over the phone.

Kalteich did not fall for that attempt, but the initial contact with the scammer alerted other scammers that Kalteich answers their messages. With this information, scammers began sending him more messages that were denied by Kalteich until a woman who went by the name of Sarena Flourence messaged him.

“I had a gal that contacted me named Sarena, and she told me that she was living with an abusive uncle in Florida and wanted to leave him,” Kalteich said. “She wanted me to buy her a bus ticket so she could leave her uncle in Florida and live with a cousin in Savannah, Georgia.”

Kalteich sent $220 to the woman. A majority of the money that he sent was through gift cards from Amazon, Ebay and iTunes. As time went on, Kalteich and Flourence messaged each other daily and built a trust. At one point, they planned on meeting at a Greyhound station in Savannah, Georgia, he said.

Kalteich bought a plane ticket and traveled to meet with Flourence. Flourence never showed up and messages sent to her were ignored. Kalteich returned home knowing he was scammed. Soon after he returned home from Georgia, he received a message from Flourence explaining why she couldn’t make it to the Greyhound.

“She told me that she was at a wedding in another town and couldn’t meet me,” Kalteich said. “I don’t know why I believed her, but this woman had me convinced that she was going to marry me. So I gave her money through Amazon gift cards so she can fly to Portland from Savannah and I would pick her up. She never showed up.”

Leslie Traylor, a new account customer service representative who works at the Bank of Eastern Oregon in John Day, advises people to avoid giving any kind of information to these scammers. Any information will help them access more personal data.

“Never give any information such as bank account numbers, card numbers, social security or any personal information whether (they claim to) be the IRS calling you or Social Security,” Traylor said. “(The actual agencies) usually send letters to get in touch with people and won’t be calling.”

Traylor also mentioned how important it is for cardholders to check their bank statements every month to make sure there are no suspicious activities or money missing from their account.

“If you notice that any money is missing from your account, immediately notify your bank about the money missing,” Traylor said. “There is usually a time limit of 60 days to recover the money that was stolen. The card that is tied to the account will then be canceled.”

Unfortunately, people who pay scammers through gift cards can’t get their money back.

Kalteich is embarrassed that he has lost over $25,000 from these scammers, but he wants people to hear his story so they avoid losing money like he did.

“This is a sad story and I’m not very proud of it, but it’s easy for scammers to hook people and continue on,” Kalteich said. “Never accept any calls or text messages from people you don’t know or have never met.”

Mike Durr, chief of the John Day Police Department, said that many scammers call from different states and countries, which makes them difficult to track down. Scammers also change phone numbers regularly and are always on the move.

When contacting people, scammers will do their homework in learning about the person they are calling.

“They do their homework, especially if you have a Facebook (account) or any kind of social media,” Durr said. “They will use that personal information found on social media to sound legitimate and gain trust with the person they’re calling.”

One factor that motivates scammers to continue calling people is the fact that it only takes one person to make a payday.

“Scammers only have to get one or two people, and they make a couple hundred dollars in an hour,” said Durr. “It’s not about how many people they trick, it’s about how much they can get out of a person.”

If a phone call sounds too good to be true or sounds suspicious, then it’s probably a scam.

The police department verified that the IRS will never call by phone, and while the Social Security Administration may call under very select circumstances, it would not call someone on a first attempt who was not expecting communications from the agency.

Girl Scout took an oath in 1932 and hasn't quit yet

Who is Michael Avenatti?