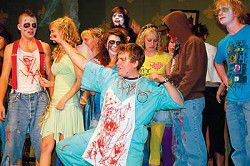 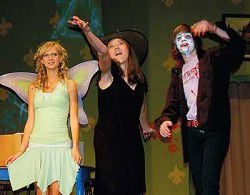 JOHN DAY - There was hardly a seat available Oct. 30 during the second night of the Grant Union High School play, "Teenage Night of Living Horror," written by Tim Kelly.

Younger ones in the crowd sat a little closer to their parents and watched intently as the story of innocent teens planning a celebration unfolded into a ghoulfest.

Three tough kids who hide out at the old place they call home were played by Gabe McKern, Missy Hale and Karina Hoffman.

Kaitlyn Webb and Morgan Cleaver were cast as vivacious students set on ruining the party.

There were tales of Old Miss Carlson who once said something from the nearby graveyard tried to bite her and warnings to get out were sounded by the old farmer (Zach Mendenhall), but all the words of caution fell on deaf ears.

The deputy (Trent Wagner) also warned the students to play it safe - but wasn't too cautious himself.

A few of the teens saw strange things out the window and in the basement, including Ann (Webb) who was frightened and wanted to go home.

The creepy Dr. Thantos (Nathan Roy) and Nurse Payne (Elyse Lemaire) "injected" a lot of personality into their parts - as they conducted experiments to re-animate the dead.

Viv (Cleaver), overtaken by ghouls (Nick Piazza, Charlie Fronapel, Daniel Soupir, Zach Gagnon, Jake Reynolds, and Katelyn Page) was the first to go. She turned into one of the creeps herself and bit an unsuspecting bridesmaid (Alex Krausse) who dropped in seeking directions.

The other teens left the house to see what was going on at the cemetery - they saw figures shooting out of the ground.

Later, three students (Forrest Hughes, Asya Hensley, Sina Ross) dressed for the senior party arrived, unaware of the circumstances and ready to celebrate with friends - this time the audience wants to warn them!

Each player brought an abundance of personality to their characters, and thrills and chills kept the crowd at the edge of their seats right to the curtain closing.

"It turned out the way we dreamed it would," Reynolds said.

He didn't live up to the office: CNN reporter on Trump's absence at historic ceremony