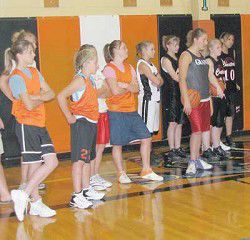 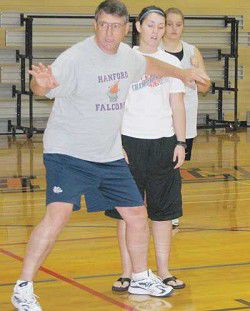 <I>Contributed photo/Penny Black</I><BR>Bret Akers demonstrates how to position yourself for the rebound during a clinic.

<I>Contributed photo/Penny Black</I><BR>Bret Akers demonstrates how to position yourself for the rebound during a clinic.

The Hanford team drove four hours to participate in the tournament. However, Hanford has a close connection with Prairie City. Coach Bret Akers is a Prairie City alumnus. He graduated from Prairie City High School in 1977 and the Oregon Institute of Technology in 1981.

Akers has coached basketball for 19 years. His daughter Kayla is currently attending and playing basketball for Pacific University. She also helps put on basketball camps as part of the Point Guard College, a traveling basketball clinic. She was in Texas the week before the camp and will be in New Jersey July 3 to 7.

The Akers put their years of experience to use during a rebounding clinic Sunday morning. Prairie City, Grant Union and Hanford attended the clinic.

The Akers will be helping out the Prairie City team later this summer when they put on clinics Aug. 1-3.

"The girls learned a lot during the clinic," Prairie City coach Penny Black said. "They learned about getting and keeping position. An important thing was that they need to want the ball more than the other girl going for it.

"I think the girls did really well. They seemed to be in good shape still. They were happy to be on the court and playing. We should have a good season."

Prairie City now has several months off, aside from the August clinic, before the girls begin practice for the 2008-09 season in November. Black said the Panthers will host their annual Tip Off Tournament early in December.

Why Pennsylvania court ruling is a win for Democrats

Breaking down the New York Post's story on Hunter Biden

High speed trains are close to doubling their speed