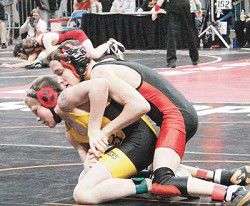 The Prospectors took seven wrestlers, the most in school history, to the 2009 Oregon School Activities Association 3A Wrestling State Championships Friday, Feb. 27, and Saturday, Feb. 28.

The Eastern Oregon League had a strong showing at the championships. Burns took first place in the state, Nyssa was second and Vale earned 12th in addition to Grant Union's success.

Dawson is a three-time state champion and has a high school record of 135-9. Whitman ended with a record of 101-43. He is only the third Grant Union wrestler to break 100 wins.

"I think it's an honor (to take second place in the state)," Whitman said. "Not many people can say they've done that in their lives. (Dawson) was just extremely strong. He caught me off guard with his first move and just took it to me."

Stegman, wrestling at 215 pounds, pinned Dustin Woosley of Waldport in his first match and defeated Chris Cooper of Coquille in his second match of the championships. Stegman then lost to Eric Coy of Vale. Coy went on to win the 215-pound state championship. Stegman picked up another win against Michael Martin of Burns before losing to Alex Greer of Colton in the third place match.

"Zach was a real surprise," Grant Union coach Dave Naibert said. "He worked his butt off. He wrestled a good match against Eric Coy. I think Coy was happy to get off the mat when that match was done."

Gagnon, at 103 pounds, had a bye in the first round, but lost 12-2 to Quinn Johnston of Gold Beach. Gagnon went on to beat Michael Urrutia of Nyssa and Kelly King of Rainier. Gagnon lost a 10-1 decision to Tanner Canaday of Myrtle Point, but pinned Justin Rosenberry of Willamina to earn fifth place.

"Levi came up against one of a pair of twins in his first match," Naibert said. "The twins wrestled each other for first place. They have the advantage of training with each other all year."

Jesse Wise had a bye and lost his first match, 13-10 to Carlos Villa of Bandon. Wise went on to pin Mat Schafer of Reedsport in 2:38. He was knocked out of the championships by Ricky Ballentine of Waldport.

Don Speakman, Ethan Kowing and Clay Thomas each lost their first two matches to be eliminated from the championships.