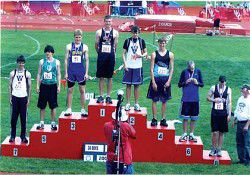 <I>Contributed photo</I><BR>Alex Bremner takes his place on the winner's stand after his first-place triple jump. 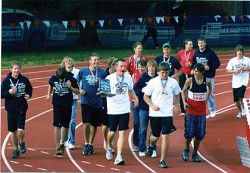 <I>Contributed photo</I><BR>Alex Bremner takes his place on the winner's stand after his first-place triple jump.

MONMOUTH - A week ago Grant Union Track Coach Sonna Smith said that if the Prospector boys could repeat their performances at districts, they would have a great shot at taking state.

The Prospector boys did just that, and were crowned 3A state champions on May 20 at Western Oregon University's McArthur Field.

After finishing ninth in 2006, Grant Union dominated the playing field on May 18-20, recording 84 points. Bandon finished second with 49.

"They had a goal of winning state," said Jon Houk, Grant Union jumping coach. "It's nice to see that all that hard work paid off."

Alex Bremner jumped his way to the first-place podium in the triple-jump with a 44-05 1/2 leap.

"He paid his dues, worked hard, and it worked out for him in the end," said Houk, who has been coaching Bremner since he was in the seventh grade. "That was his first jump, too, and it was all over. Everyone else was competing for second place."

Jimmy Cook is the 3A javelin champion with a dominating throw of 176-01. Cook's nearest competitor was Sheridan's Ryan Swift, who threw a 164-07.

"We keyed in on him to get a good first throw," said Grant Union javelin coach Dorman Gregory, who has been coaching Cook for two years.

"He is a hardworking kid and he put a lot of effort into it."

According to Gregory, Cook's personal best throw is a 182-06, which is also the 3A state record. Although Cook didn't quite get there at the state meet, Greogory is optimistic about Cook's future.

"What a lot of people don't realize is that he (Cook) is only a sophomore," Gregory said. "We've got two more years to get him a state record, and we'll get him one."

Cook also finished fifth in both the discus and the shot put.

The second place spot in the high jump went to Dustin Kreger, who jumped 5-11. Hiatt won the event with a leap of 6-02. Kreger finished fourth in the 110-meter hurdles with a time of 16.17.

Jamison Soupir was right behind Kreger in the 110-meter high hurdles with a time of 15.54, earning him fifth place. Soupir also finished fifth in the 300-meter hurdles, with a 42.75.

Eric Coats edged out Regis' Steven McClain for the fifth-place spot in the 400-meter dash with a time of 52.46

Caleb Sturgill, the lone distance-running finisher for the Prospectors, finished fifth in the 3,000 with a time of 9:20.94.

The victory marks the first time a Grant Union track and field team has ever won the state championship. An awards ceremony will be set for sometime next week.