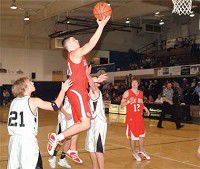 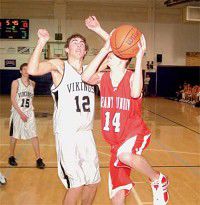 <I>Eagle photo by Tim Adams</I><BR>Grant Union's Kasey Ashmead (14) tries to get a shot off over Imbler defender Brady Lovell (12).

<I>Eagle photo by Tim Adams</I><BR>Grant Union's Kasey Ashmead (14) tries to get a shot off over Imbler defender Brady Lovell (12).

After losing 49-35 to Vale in the district's opening round Feb. 17, Grant Union came back Feb. 18 and beat Union for the third time this year, 42-32, to advance to the opening round of the state Class 2A tournament as the Wapiti League's No. 3 seed.

After taking a 21-11 halftime lead, the future appeared bleak for the Pros as the Bobcats scored 10 third-quarter points while holding Grant Union to three and trimmed the lead to 24-21.

In the fourth quarter the Bobcats took a 25-24 lead on a Kaden Titus hoop, but a three-point play by Brandon Lovell with 6:08 remaining kicked off a 14-0 Grant Union run to seal the victory.

Lovell scored a game-high 12 points, Chance Ferguson had nine, Taylor Myers knocked down a pair of three-pointers to finish with six and Nolin Page also had six.

Vale 49, Grant Union 35The Prospectors' locker room was quiet as a tomb Friday night after a 49-35 loss to Vale in the tournament's opening round, even quieter than the U.S. Women's Hockey team's locker room was after the 3-2 shootout loss to Sweden in the Olympics. Grant Union played the Vikings evenly in the opening quarter, but were outscored 19-9 in the second period and that sealed the Pros' fate.

"We didn't shoot well," coach Brad Smith said. "We had some pretty good shots that we couldn't get to go in. When you play in a big game like this you have to get some shots and play good defense and unfortunately our transition wasn't that great either. It was a combination of things."

Tied 11-11 after the first eight minutes of action, the Vikings went on a 10-2 run to open the second quarter and build a 30-20 halftime lead.

Grant Union remained cold from the field in the third quarter scoring just eight points as Vale held a 42-28 lead heading into the final period.

Ben Dieker scored nine points for the Prospectors, but was modest about his accomplishment.

"We just have to be ready to win tomorrow. We'll be ready," he said.

Brady Lovell scored a game-high 20 points for the Vikings and Jason Noland had 15.

The Prospectors (11-12) begin state tournament play at 6 p.m. today, squaring off against Weston-McEwen in Athena.

The TigerScots lost 71-54 to Sherman County in the CBC Tournament title game in Pendleton Feb. 18.