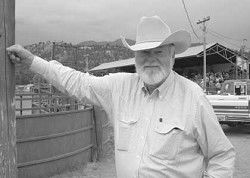 <I>Eagle photos by Angel Carpenter</I><BR>Red Steagall with his fans awaiting in the grandstand at the Grant County Fairgrounds. 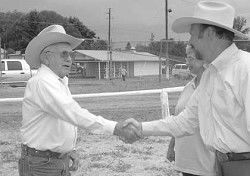 <I>Eagle photos by Angel Carpenter</I><BR>Red Steagall with his fans awaiting in the grandstand at the Grant County Fairgrounds.

JOHN DAY - Grant County residents packed into the fairgrounds grandstand July 6, and if they were any closer to the edge of their seat they may have fallen off as they engaged their ears in an evening of cowboy poetry and toe tapping western music.

The Red Steagall & the Boys in the Bunkhouse concert was provided by Old West Federal Credit Union to celebrate its 50th anniversary.

Steagall, a world renowned cowboy poet and western swing musician, is from Ft. Worth, Texas, and was joined by his brother, Danny Steagall of Chickasha, Okla., and Rich "Badger" O'Brien of Burleson, Texas, two other big names in the country music business.

KJDY listeners are familiar with Red Steagall. Besides hearing his singing voice they remember his words, "Tell 'em Red sent ya," in the credit union's commercial; he also can be heard on "Cowboy Corner" Sunday mornings at 10 a.m.

Station owner Phil Gray had the honor of joining Red for dinner. "He's a good storyteller, and he doesn't put on airs," Gray said.

Goodwin, whose husband, Ralph, recently retired as Old West's president and CEO, said she had a wonderful time showing off Grant County to the guests. "They're such genuinely good people."

Gary Gregg said in response, "It's real nice to have entertainers that are like that."

Red Steagall said that during the day he'd visited the Grant County Ranch & Rodeo Museum - "Very nicely done," he said - and "Jim's wagon store" (Oxbow Trading Company) where Red "listened to some of his stories."

Before he and the Boys in the Bunkhouse took the stage, Pierre Jones had the crowd smiling as he recited "The Cremation of Sam McGee" by Robert W. Service, and he shared other poems he's authored.

A.K. "Kathy" Moss followed, and dedicated one of her poems to 85-year-old Marilyn Stout of John Day.

"It was a surprise to me," Stout said.

She had been speaking to Moss on a day prior to the concert and had mentioned the poem made her choke up when she heard it.

Both Jones and Moss are longtime Grant County residents and are well known for their poetry.

Stout was excited to hear that Steagall was coming to town and said that listening to Cowboy Corner makes her day. She especially enjoyed Red's "We Danced on the Oregon Trail" at the concert.

Just before the Steagall brothers and O'Brien took the stage the wind kicked up, knocking over some stage lights. The threat of rain hovered over the fairgrounds, but no more than a drop or two fell and the wind died down allowing the onlookers to enjoy the rest of the show.

Red Steagall pleased the crowd with poems he's written such as "The Fence That me and Shorty Built," which surely more than a few ranchers in the audience could identify with. The poem is about doing the best you can each day - "doing things the easy way ain't what it's all about," he said.

The three guitarists played in perfect rhythm with beautiful harmonies as Red sang songs like "The Narrow Trail" and "Here we go Again."

Humor kept the listeners in stitches.

Life became a lot better, Red said, when doctors claimed that a little red wine was good for your health. Nothin' like "guilt-free drinkin' in the Bible-belt," he said.

There's no doubt Red Steagall & the Boys in the Bunkhouse will continue entertaining their fans for years to come.