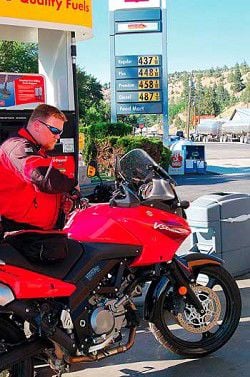 Filling up at Jackson's Shell Station in Canyon City, Jeremiah Armstrong of Prairie City says he saves about $100 a month by commuting to work on his motorcycle. The Eagle/Angel Carpenter 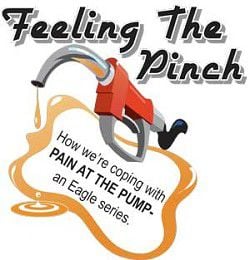 Residents cope with costs to stay on the road

Filling up at Jackson's Shell Station in Canyon City, Jeremiah Armstrong of Prairie City says he saves about $100 a month by commuting to work on his motorcycle. The Eagle/Angel Carpenter

Residents cope with costs to stay on the road

Editor's note: In the first of a series of articles on the fuel crisis, the Eagle looks at the impact on local families.

GRANT COUNTY - With fuel prices running $4.30 to $4.80 a gallon in the area - up approximately $1 a gallon from last summer - many residents are wincing at the pump. Drivers of SUVs and full-size diesel pickups fork out as much as $100 to $150 a tank.

Yet some drivers are finding savvy ways to deal with the extra strain on their pocketbooks.

Jeremiah Armstrong of Prairie City pays $22 to fill up the tank on his motorcycle. When he bought it new a couple of years ago, the thrill of the ride was on his mind, not saving money on fuel. Now he's enjoying the benefits of 50 to 60 miles per gallon, especially with a 15-mile commute to work.

Armstrong figures he saves at least $100 a month on fuel costs by leaving the family car and pickup at home with his wife Laurie.

"Now my hobby is paying for itself," he said.

He started driving his red Suzuki V-Strom to work at the Natural Resources and Conservation Services in John Day in March, when temperatures were as low as 20 degrees.

He's noticed more motorcycles on the road since fuel prices started skyrocketing, and it makes him cringe to see a rider with no helmet and wearing a tanktop.

Armstrong said those wanting to buy a motorcycle should invest in the proper training and safety gear.

For three Seneca women, carpooling is the answer for the crunch that gas prices are putting on their budgets.

With gas prices as high as they are, she's careful to keep track, "so I can pay my fair share," she said.

Vikki Rider is usually at the wheel. She and Linda Starbuck both work at Bank of Eastern Oregon.

There's another plus to carpooling - beyond just saving at the pump.

"It's fun that we're able to visit and talk about things," Rider said. "If you're driving by yourself, you don't get that interaction."

When Wilma Bauer noticed the significant increase in her fuel bill, she cut back on her driving. Now she pays the same amount for fuel each month as she did a year ago, but only because she drives less.

"I try to keep a list of what I need in town and try to go one day a week," she said.

Bauer added, "I really don't think it pays to go out of town to shop. I shop local at all the stores."

She fuels up twice a month, and as her husband once taught her, she never lets the gauge get below half a tank.

In Dayville, the Bogardus family enjoys walking just about everywhere in town, including the Dayville Mercantile for grocery items.

Once or twice a month they make the 31-mile trek to shop at Chester's Thriftway in John Day to restock their pantry shelves and buy fresh fruit, but they always have other errands to run.

"We never make a trip for just one thing," Rebecca Bogardus said. "We make sure there are several things on the same day, like doctor's appointments, shopping and taking tests."

Rebecca takes distance ed courses and her husband, Peter, teaches math to grades 7-12 at Dayville School. They have two children, Katrine, age 3, and Martin, 18 months. They moved to Dayville from Provo, Utah last summer, and both grew up in Hillsboro.

Their family travel this summer will consist of two visits to Portland and a trip to La Grande - two of the three trips are teacher conferences for Peter, creating a budget bonus - one of the conferences is paid for.

To cover the costs for travel, in and out of the county, they have to do some juggling with their finances.

"We have had to constantly rework our budget every month," Rebecca said. They've even taken some money away from what they're saving for a house to go toward gasoline.

"It's just frustrating because, here, we can't cut down on our driving and we can't reduce the amount we have to spend."

Residents aren't challenged by the high fuel prices only - the price of food has also risen. Trucking companies and independent truckers hauling commodities are forced to raise their rates now that a fill-up for a big rig can run more than $1,000. Those increases are passed on to store owners, then consumers.

Blaine Huffman, owner of Huffman's Select Market in Prairie City, knows the higher prices on items in the store are difficult for some shoppers.

"It costs more to get product into the store because of the fuel increases," he said.

He noted that more locals seem to be sticking closer to home to make their purchases.

Wisconsin using overflow facility to keep up with Covid-19 cases