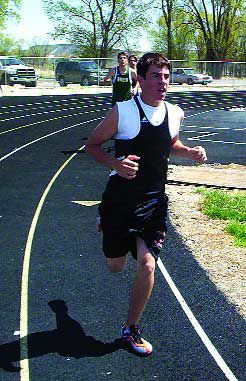 Prairie City's Tel Winegar takes off on the track during a recent meet. He placed second in the 800-meter run and seventh in the 1,500. Photo by McKenzie Purnell 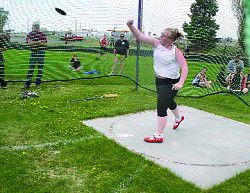 Panther Meaghan Keffer sends the discus spinning en route to a fifth-place finish in that event. Photo by McKenzie Purnell

Prairie City's Tel Winegar takes off on the track during a recent meet. He placed second in the 800-meter run and seventh in the 1,500. Photo by McKenzie Purnell

Panther Meaghan Keffer sends the discus spinning en route to a fifth-place finish in that event. Photo by McKenzie Purnell

She was proud of her accomplishments, but said, "I can't look past districts. I have to keep pushing myself to get better."

Last year, she qualified for the state meet in both the 100 and 300 hurdles, finishing third in the 100 hurdles.

Several other athletes from Prairie City also competed well. Katie Hoberg placed fourth in the 100-meter dash, third in the 400-meter dash, and seventh in the long jump.

Caitlin Patten decided to try something new on Friday, and participated the 3,000-meter run, finishing third. She also took fourth in the 1,500.

In the javelin, Meaghan Keffer placed seventh and McKenzie Portugal took eighth. Keffer also took fourth in the shot put and fifth in discus; her final distances were 27-4 and 70-11.

Tel Winegar was the sole runner for the Prairie City boys, and he placed second in the 800-meter run, and seventh in the 1,500.

Athletes from Dayville and Long Creek attended the league meet also. Jessica Flower of Dayville placed fifth in the 200-meter dash, second in the long jump, and first in the discus, throwing 84-5.

Cody Flower took fifth in the 100-meter dash, and Elizabeth Inscore placed second in the javelin, with a throw of 86-8. Jessica Drake of Long Creek competed well, placing fourth in the 200-meter dash and third in the long jump.

Points slowly added up, and the Panthers girls, with a final score of 55 points, placed second and the Dayville girls finished fourth with 39 points. There were seven attending teams: Prairie City, Crane, Harper, Dayville, Huntington, Ukiah, and Long Creek.

"Most of the athletes have shown improvement in the last two track meets," said Coach Weymouth. "These efforts couldn't come at a better time. Our district meet is next Saturday in Baker City and we hope to show more improvements there, including some state qualifiers."

On May 1, the Panthers competed in the Burns Invitational Meet. They had a good showing, and Bradi Voigt set a new personal record, throwing 114-7 and placing second in the javelin.

Next up for the Prairie City team: The High Desert/Old Oregon League District Track Meet will take place on Saturday, May 12 in Baker City.

The Senate is slipping from Republicans