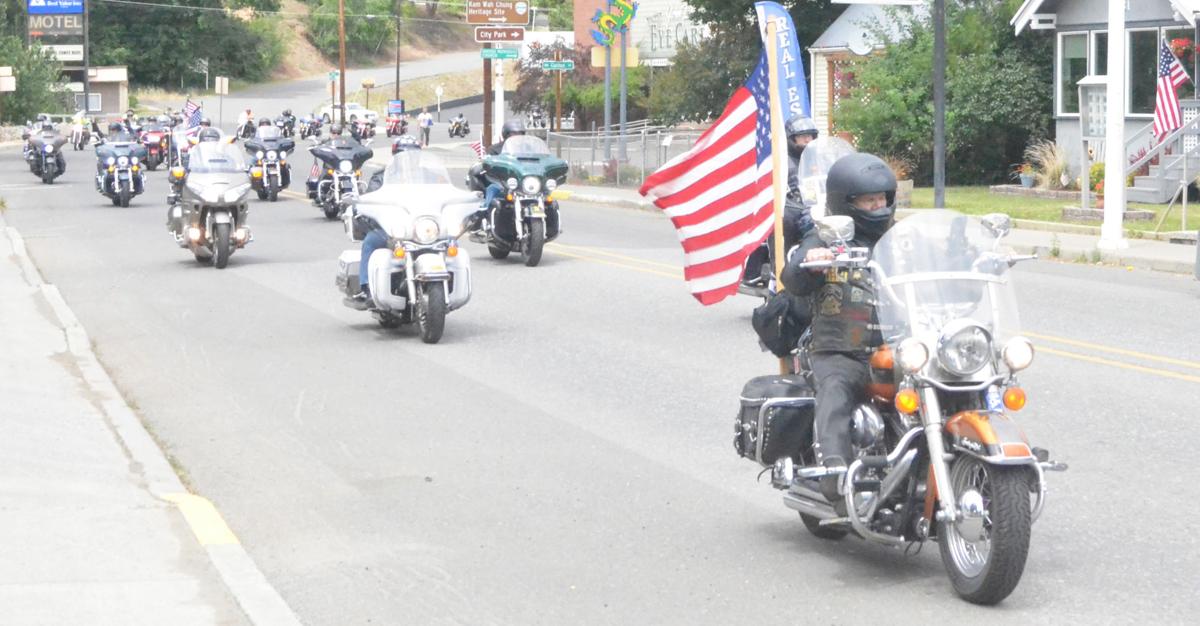 A caravan of motorcycle riders with the Oregon Veterans Motorcycle Association ride through John Day to dedicate Highway 26 as a POW/MIA highway. A sign dedication ceremony and luncheon was held at the John Day Elk’s Lodge. 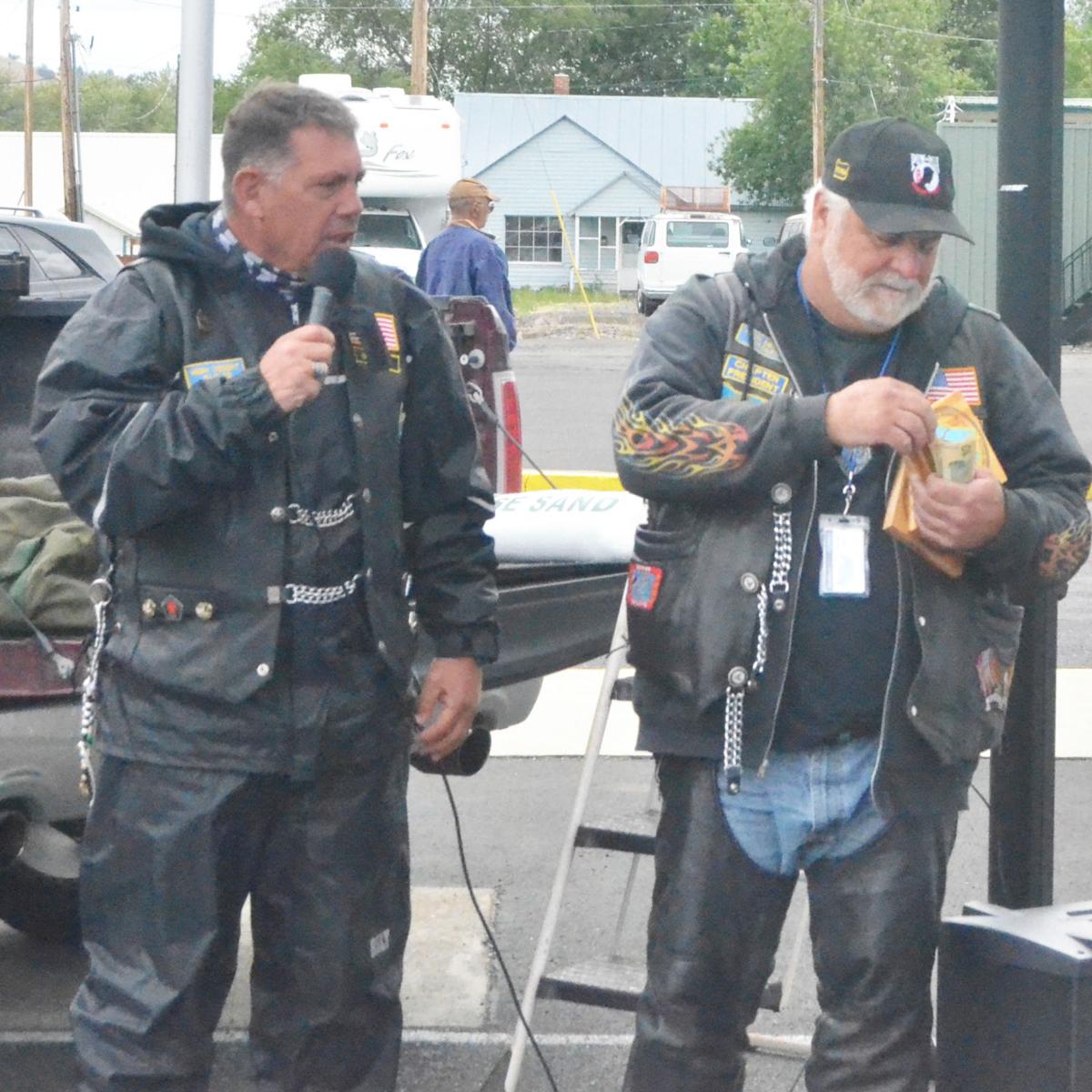 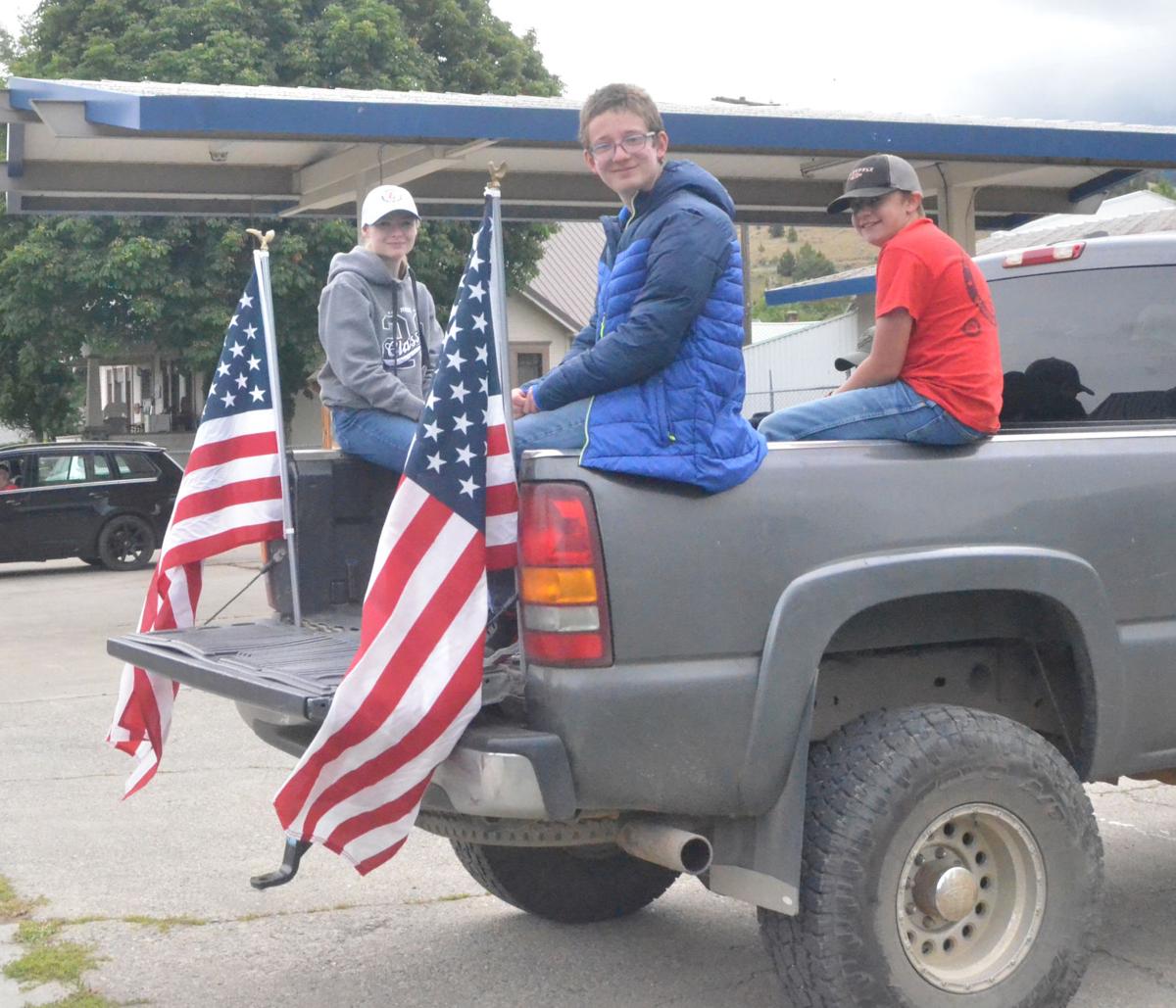 Samantha Floyd, left, and members of Boy Scout Troop 80 wait for the motorcycle riders to pass through John Day on Sunday. Greg Floyd, scoutmaster, said scouts lined main street with flags ahead of the riders passing through John Day.

A caravan of motorcycle riders with the Oregon Veterans Motorcycle Association ride through John Day to dedicate Highway 26 as a POW/MIA highway. A sign dedication ceremony and luncheon was held at the John Day Elk’s Lodge.

Samantha Floyd, left, and members of Boy Scout Troop 80 wait for the motorcycle riders to pass through John Day on Sunday. Greg Floyd, scoutmaster, said scouts lined main street with flags ahead of the riders passing through John Day.

dedicate Highway 26 to prisoners of war and servicemembers missing in action as community members lined the streets with flags to honor them.

With a sheriff’s escort, the riders stopped at the John Day Elk’s Lodge for lunch and a sign dedication.

Grant County Sheriff Glenn Palmer, a veteran, said it was an honor to escort the caravan of motorcyclists through the county.

“I have always believed that it is our duty as public servants to be giving of our time and resources to those who have and most likely with the MIA’s and POW’s, gave the ultimate sacrifice in service to our nation and it’s citizens,” he said. “I don’t believe that we should turn our backs on these folks, which also goes to show for those who have served and are no longer living and those currently serving or those who may serve in the future — gives a sense of understanding to those that we will never forget what they gave and where they have been and what they have done and for some what they have been through.”

Van Voorhis said events like the highway dedication let veterans know that the community is “all in” for them.

Larry Moyer, president of the Central Oregon Chapter of the VMA and a Persian Gulf War veteran, said each rider has a personal reason for participating in the ride.

“For me it’s been really important to be a part of something that takes care of veterans that are in need,” he said.

Moyer said his uncle, a World War II vet awarded the silver star, the third-highest military award for valor against an enemy of the United States, had post-traumatic stress disorder when he came back from the war and ended up committing suicide.

“He ended up being one of the 22 vets per day that takes their life,” he said. “So it touches me there, and when you’re in the service, all this stuff touches you all the time.”

Cliff Brumels, co-organizer and Persian Gulf War veteran, said many people do not think about the “after effects” Veterans go through when they leave the military.

“Everything in your life changes because you’re in a structured environment,” he said. “And then when we come out into the public, we have to change, but we have things we carry with us that we didn’t notice when we were in, like our PTSD. “

The outside world for veterans, said Brumels, is kind of “strange.”

“When you come out into the world, the only comrades we have our brothers and sisters you see here,” he said.

Brumels said his uncle, a pilot in the Vietnam War, was shot down and held as a POW. He said he passed away in Prineville about four years ago.

“I stay connected with my cousins because that was their father,” he said.

Dennis Guthrie, a former Army medic during the Vietnam War, said about 80,000 soldiers have not been accounted for since World War II and 60,000 of them never will be because they were lost at sea during the war.

He said there are another 20,000 soldiers that could be accounted for so the families can get closure.

“We ride for those who can’t ride,” he said.

Rockets fired from Gaza; Israel retaliates during another day of violence in Jerusalem

Honig: This is bad news for Matt Gaetz