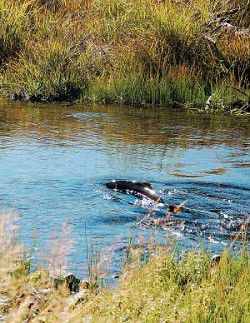 <I>The Eagle/Scotta Callister</I><BR>A male salmon stays close to a female, working over her spawning area, on the Middle Fork John Day River. ODFW crews have been walking the John Day Basin in recent weeks to count the fish and track their success.

<I>The Eagle/Scotta Callister</I><BR>A male salmon stays close to a female, working over her spawning area, on the Middle Fork John Day River. ODFW crews have been walking the John Day Basin in recent weeks to count the fish and track their success.

BATES - A female salmon hovers over the rough cobble in the river, a wary 13-pound male just off her side.

Another male darts up from the riffle below, and the guarding male spins backward to give chase, powering through the shallow water and forcing the rival downstream.

The threat averted - at least for the moment - the male returns to his vigil, waiting for the female to drop eggs into the hole she has scrubbed out of the rocky river bottom. The male will fertilize the eggs - some of about 1,000 the female deposits into several holes - and then will move on to seek other spawning females. The female will continue her work, pushing cleaned gravel over the holes to protect her offspring.

Within a few days, the exhausted female will die, and the male will follow suit after the last of the spawning is done. It's the natural conclusion to their life cycle, typically about four years in length.

The scene, repeated throughout the John Day Basin in recent weeks, is the annual rite for mature spring chinook salmon, which swim up the river system in late summer to spawn.

In a tandem tradition, Oregon Department of Fish and Wildlife workers have been out in the field, tracking and counting the salmon population.

Checking redds in the Middle Fork John Day River last week, ODFW fish biologist Jeff Neal said the agency has been doing counts like this since 1959.

Over the season, two ODFW staffers and three or four seasonal workers walk about 85 miles of the river reaches and tributaries where the fish are known to spawn.

"We try to go every place in the basin where they spawn," Neal said.

The ODFW crew carefully monitors the gravel nests, called redds, counts live fish and also collects data from the carcasses after the exhausted fish die off. The work reveals clues as to the age structure of the population, spawning success rate, and the extent of hatchery strays found in the river.

Neal said the majority of the wild fish they record were hatched in local waters, with about 25 percent crossing over from other populations, such as those in the Umatilla or even rivers in Idaho.

Eggs laid this season will hatch out in the gravel, maturing to fingerling size by next spring when the river ice breaks up and flows boosted by snowmelt distribute them downstream.

"They can end up as far as the mouth of the John Day," Neal said. The fish feed in the comparatively rich waters of the lower basin and grow for the next phase of their lives. Then they venture toward the ocean, arriving at the mouth of the Columbia at about 1-1/2 years of age.

Most stay in the ocean about two years, returning to the John Day system as mature fish in mid-summer. The fish seek cool waters to hole up in before making their final push upstream to spawn in late summer.

During the summer season, ODFW crews tag some 5,500 fish.

"The majority of those we tagged in 2007 are coming back as adults now," Neal said.

He said it's too early to tell how good a salmon year it's been. In a few weeks, after canvassing more redds and analyzing the data, the agency will have a clearer picture, he said.

Neal said people who visit the Middle Fork, North Fork and mainstem John Day River at this time of year may see the salmon preparing their redds or spawning. ODFW urges people to take care not to disturb the salmon, which are easily spooked by quick motions or noise from the riverbanks.

The process is easily disrupted, he added.

What is a stock market correction?