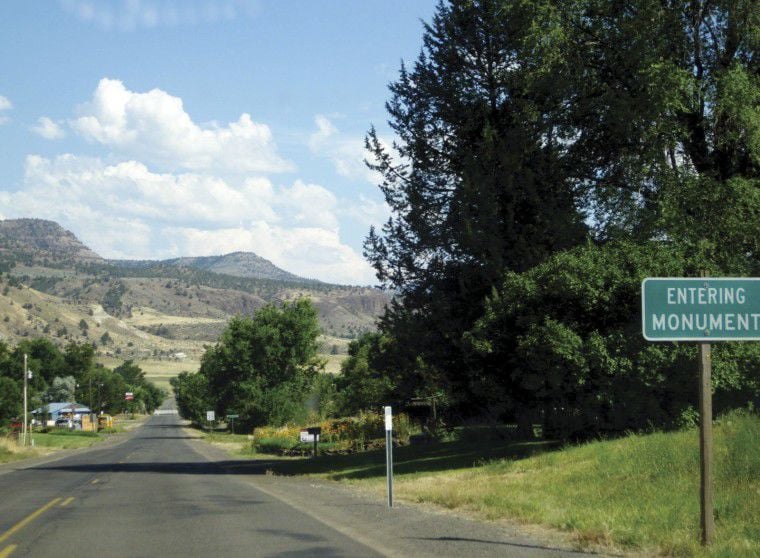 <p>Residents treasure the peace and quiet of the scenic Monument country, in northern Grant County.</p> 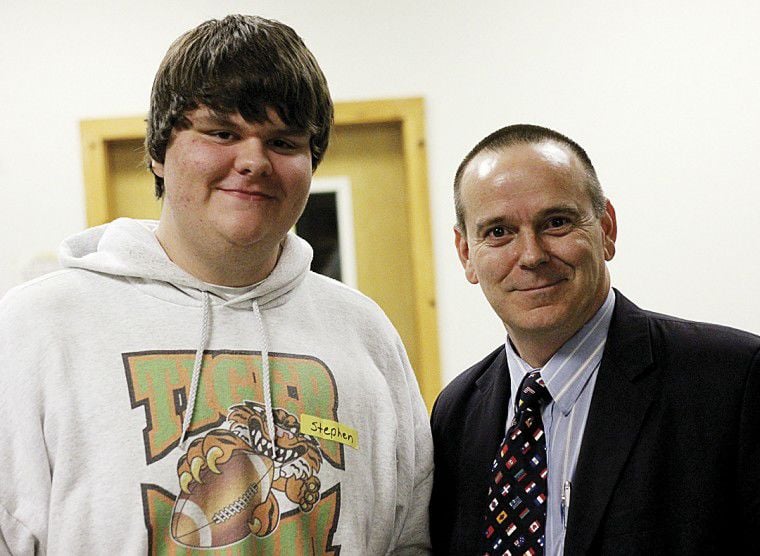 <p>Student Stephen Binger and Earl Pettit, superintendent, are among the 128 residents who call Monument home.</p> 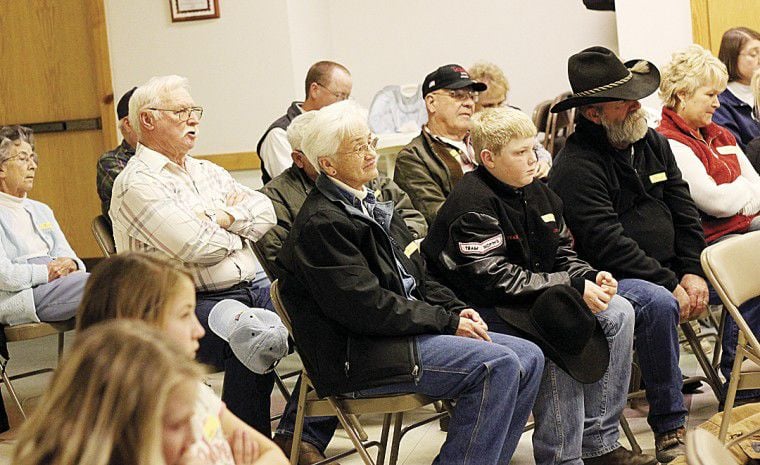 <p>Residents listen as an OPB crew tapes a meeting at the community center in Monument.</p> 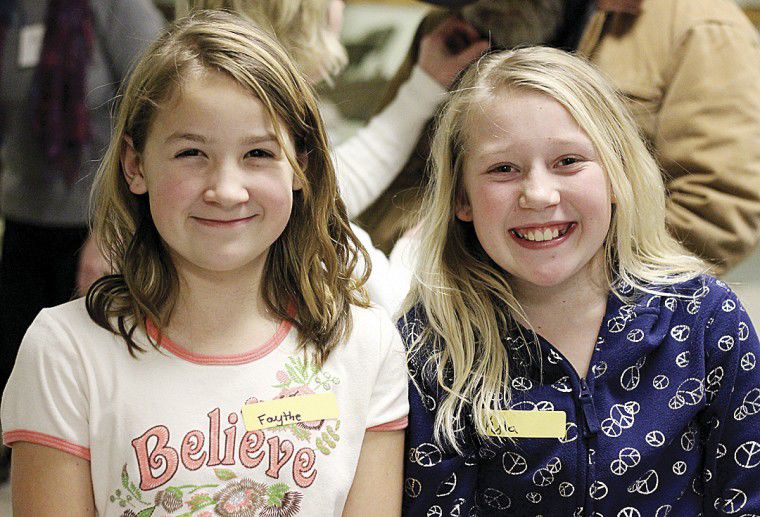 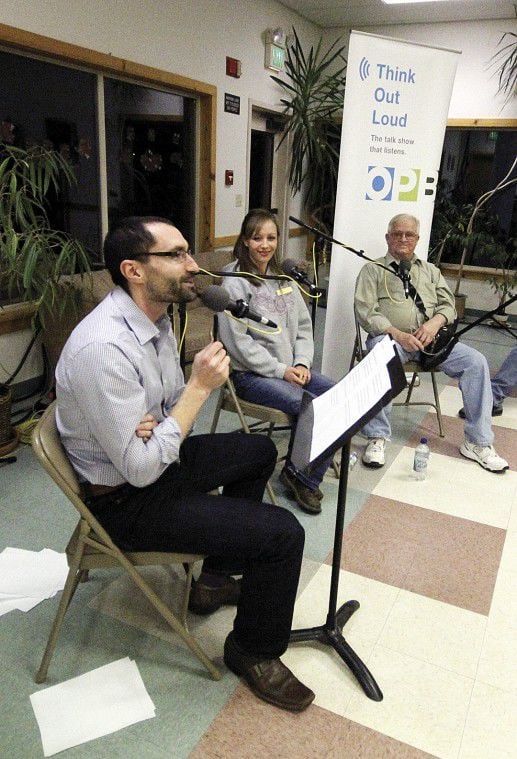 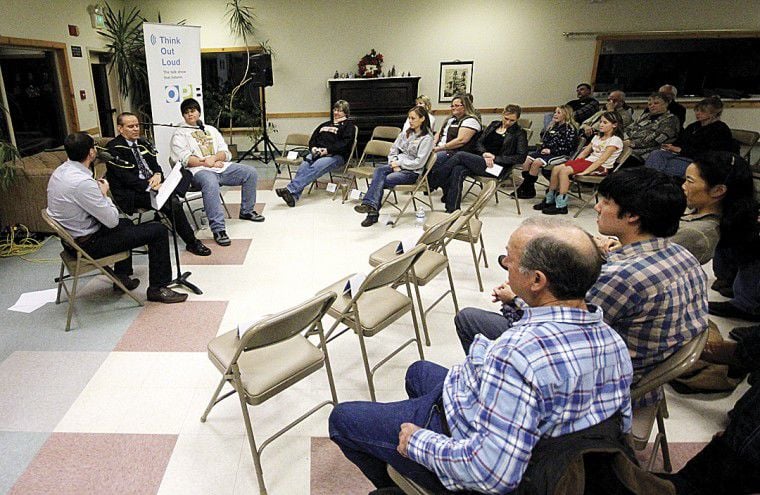 <p>Residents gather in the senior center to listen and participate in the taped show, "Think Out Loud."</p> <p> </p>

<p>Residents treasure the peace and quiet of the scenic Monument country, in northern Grant County.</p>

<p>Student Stephen Binger and Earl Pettit, superintendent, are among the 128 residents who call Monument home.</p>

<p>Residents listen as an OPB crew tapes a meeting at the community center in Monument.</p>

<p>Residents gather in the senior center to listen and participate in the taped show, "Think Out Loud."</p> <p> </p>

MONUMENT - What's life like, living in a small town?

That was one of many questions asked of Monument residents as the radio show crew from Oregon Public Broadcasting's program "Think Out Loud" visited the town of 128 last Thursday.

The show's "Our Town" series explores the lives of people in the Northwest, and Monument was the third selected community to receive the spotlight, following Astoria and Camas.

Residents congregated the evening of Jan. 26, at the Monument Senior Center, for a discussion held by host Dave Miller, producer Julie Sabatier and other OPB staff.

Many residents tackled topics of local life: their small school, cellphone reception, employment challenges and impact of absentee landowners, as well as how they deal with the distance to shopping and doctors, and what residents love about their town.

Earl Pettit, superintendent of Monument School, told Miller about the variety he finds on the job. Besides being superintendent, Pettit is the principal, track coach, transportation director and part-time bus driver.

He said went from working as a superintendent over nine principals in Arizona to a school of 45 students.

"Since moving here, my family is happy," he said. "There is a freedom that comes with living in Eastern Oregon particularly in Monument."

Part of that freedom, he added, is being able to let his 10-year-old daughter play outside without worrying about sirens going by.

Stephen Binger, a senior at the school, said he appreciates the strong bonds the students are able form with each other and their teachers.

The school is the center of the community, said secretary Jennie Mund. "Everybody cares about the kids and what goes on here," she said.

Although the school is small, the students still have opportunities to broaden their horizons.

Older students are encouraged to take an elective online class - Binger takes video game design - and a trip to China is planned in March.

When Miller asked if the audience would like to have cellphone service, the response was mixed.

Binger said it's not an issue that concerns him.

He got a laugh from the audience when he said the odds are that the friends he'd want to call "would be sitting next to me."

Others, however, felt cell service would be helpful for their jobs or when they had a flat tire, and Joe Duncan noted that those with medical issues would benefit.

With no regular doctor in Monument, residents usually make the 60-mile journey to John Day for an office visit or a longer trip to Bend.

Mund said she usually tries to combine trips to the doctor with grocery shopping.

There is an alternative for some medical needs, however. Shawna Clark, a family nurse practitioner at Strawberry Wilderness Community Clinic, said she comes to Monument for satellite clinics twice a month, seeing patients for immunizations, lacerations and illnesses.

"We're busy," she said, "and getting busier and busier, as more people know we're coming."

EMT Heather Riggs said the town is proud to have 11 volunteer EMTs, and the residents know they can call on them anytime.

"They will get the best treatment possible," she said.

Another subject was the pros and cons of absentee landowners.

Residents gave mixed views, noting that some of the distant owners don't take care of weeds on their property and don't bother "settle roots down," while others do keep up landscape maintenance and contribute to the community.

Rebecca Grassl moved her family from La Grande, where she'd lived for 12 years, back to Monument where she grew up.

In Monument, "everyone knows you and wants to know you," she said.

She added that what Monument really needs is jobs, but she's glad to have her mother and a sister nearby as she raises her 6-month-old twins.

Jack Cavendar, 91, has seen a lot changes over the years in Monument, including the addition of paved roads, a water system and many trees.

"The community itself is pretty much the same," he said, adding that Monument's residents live there because they want to.

"I'm real comfortable here myself," he said. "I've lived here for 60 years now, and I have no complaints."

‘This is going to be a long haul': Local taverns close for the winter