<I>The Eagle/File</I><BR>Watch your step at the co-gen plant in Prairie City. 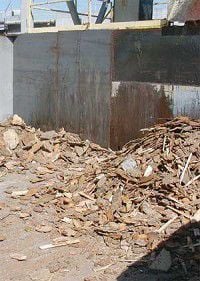 <I>The Eagle/Scott Mallory</I><BR>Hog fuel is discarded bark and wood material. It may contain dirt, and can only be used as fuel or landscaping.

<I>The Eagle/File</I><BR>Watch your step at the co-gen plant in Prairie City.

<I>The Eagle/Scott Mallory</I><BR>Hog fuel is discarded bark and wood material. It may contain dirt, and can only be used as fuel or landscaping.

PRAIRIE CITY - A few years ago, I toured Grant County's largest renewable energy facility, the Prairie Wood Products cogeneration ("Co-Gen") plant with Mr. Don Johnson of DR Johnson Lumber Company. He was greatly interested when I showed him a page from the U.S. Department of Energy's database of renewable energy generators in Oregon, where his wood-fired plants were listed by fuel source as biomass producers of renewably generated electricity. The Prairie Wood Co-gen turns wood waste into kilowatts.

HistoryMr. Johnson started in cogeneration as the best way to dispose of mill waste. Up until the late 1970s, mill waste (chips and sawdust from making boards out of sawtimber) was disposed of in "wigwam burners," the hive-shaped furnaces that can still be seen standing derelict and unused beside old mills and long-abandoned mill sites. No value was received for the material, and large amounts of particulate pollution were created. Laws were passed mandating their eventual phase-out.

Mill owners searched for an alternative. Dumping wasn't an option. It was too expensive, and too difficult to find a place that could accept that much waste. In 1986-7, Mr. Johnson purchased twin cogeneration facilities from Wellons of Sherwood. These were installed adjacent to his sawmills in Riddle and Prairie City. Since then, the facilities have been upgraded to meet current Department of Environmental Quality (DEQ) standards for air and water quality.

In the 1980s, there were several other cogeneration facilities in Oregon: North Powder, Long Creek, Heppner, two in White City, and more. All received favorable contracts under the Public Utility Regulatory Policy Act (PURPA). However, only four are still operating: the two in White City, and D.R. Johnson's two in Riddle and Prairie City. Mr. Johnson could only speculate that the reason he is still around is good raw material prices, skillful staff, and proper management, but he is concerned about the future. I pointed out that he could retire tomorrow, and asked why he is still doing this. He said, "I like it and I feel obligated ... the people here are deserving ... communities need support."

How Does a Wood-Fired Co-gen Work?The fuel used to fire the co-gen is called "hog fuel." It consists of bark and wood material that is not good enough to make other products. It may contain dirt, and can only be used as fuel or in landscaping.

The hog fuel is used to fire a four-cell boiler. Fuel is conveyed on a chain from the neighboring sawmill, and from the silos of stored fuel (150 units each at 200 cu. ft. per unit). An electric eye controls fuel feed to the boiler cells, based on demand from the boiler. When the steam pressure drops, air and fuel feed are increased as needed. Co-gen consumes about 200 units of hog fuel per day. To put that in visual terms, each hour a chip-trailer full of fuel is consumed.

In the boiler, steam is produced and pressurized at 450 lbs. The water must be cleaned before being used so it cannot contaminate the boiler. A pump pressurizes the water to 600 lbs., so it will be higher than boiler pressure. Once in the boiler, the closed system recycles the water. Steam goes through the co-gen's turbine into the "exhaust trunk," then into the condenser.

In the condenser, 2,000 tubes carry cooling water that condenses the steam back into liquid. After passes through three sections of the condenser, the cooling water drops through a cooling tower where fans chill it (much like a swamp cooler works). Makeup water for evaporation losses ranges from 60-150 gallons per minute (depending on ambient air temperature and humidity). Total water use at co-gen can be as high as 150 gpm in the cooling side, plus 15-20 gpm for the boiler side.

Control RoomThe heart of the operation is the control room, a windowed enclosure looking out on the turbine. The steam-driven turbine is a two-pole, 60-cycle, 13,800-volts General Electric 7500kw that has been upgraded. It was originally built about 70 years ago. Co-gen sells 65,700,000 kilowatt-hours annually to OTEC.

Pollution?Air quality must meet DEQ standards for particulate matter, PM10 (particulate less than 10 microns in diameter), oxides of nitrogen, carbon monoxide, sulphur dioxide and VOC (volatile organic compounds). A wood-fired cogeneration plant emits less of the oxides of nitrogen than a gas-fired plant, and more of the other pollutants (but significantly less overall than coal). The DEQ representative said there was less pollution from the wood waste material burning in the boiler than in open burning (wildfires, slash or controlled burning).

An uncertain futureThe current contract for selling power to the local utility was formulated years ago when the price of power was rising, and looked to be headed for new heights. It included automatic wholesale price increases at specified intervals. The rate being paid currently to the co-gen by the Oregon Trail Electric Co-op is approximately 17 cents per kwh. Compare that to the regular wholesale rate of around 3.5 cents per kwh paid to Bonneville, and the average retail rate of 8.1 cents per kwh, and it becomes obvious that these rates cannot be renewed when the contract expires Dec. 31. Many OTEC consumers are bitter about the co-gen's contract increasing their rates slightly above rates paid by other electric customers in Oregon.

It will take a subsidy to raise the value of a kilowatt-hour of wood-fired biomass energy high enough to make it cost-effective for the producer because most renewable technologies still require assistance to compete with highly subsidized fossil fuels. Is it worth it?

"There is a limited supply of gas and coal," Mr. Johnson said. "They pollute the air a whole lot more than a wood-fired co-gen. We clean up the forest and produce electricity out of it." A Warm Springs Tribe forester said, "This material is going to burn. We get to choose how."

 Jennifer Barker is the power (solar and otherwise) behind Eastern Oregon Renewable Energies Non-profit, which hosts the annual SolWest Energy Fair the last weekend of July at the Grant County Fairgrounds. Info: 575-3633; (www.solwest.org)

Protester had hands up when LAPD shot him with projectile