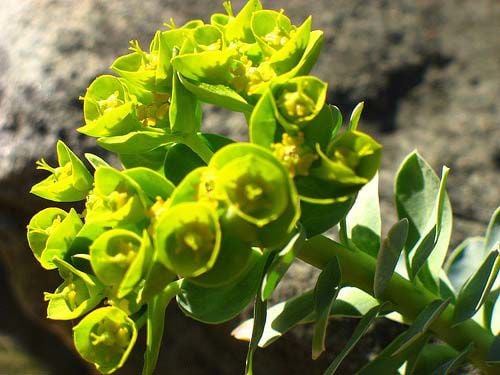 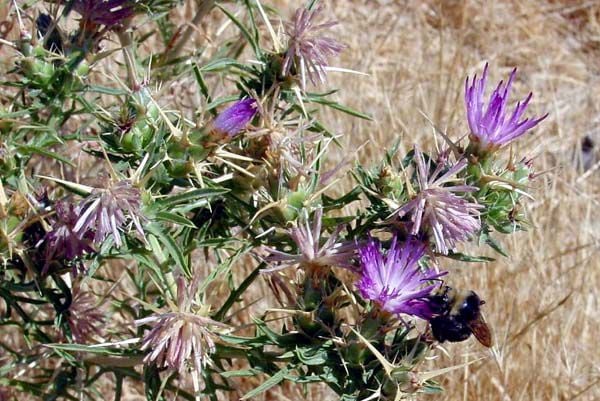 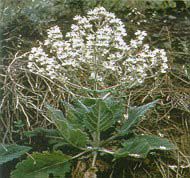 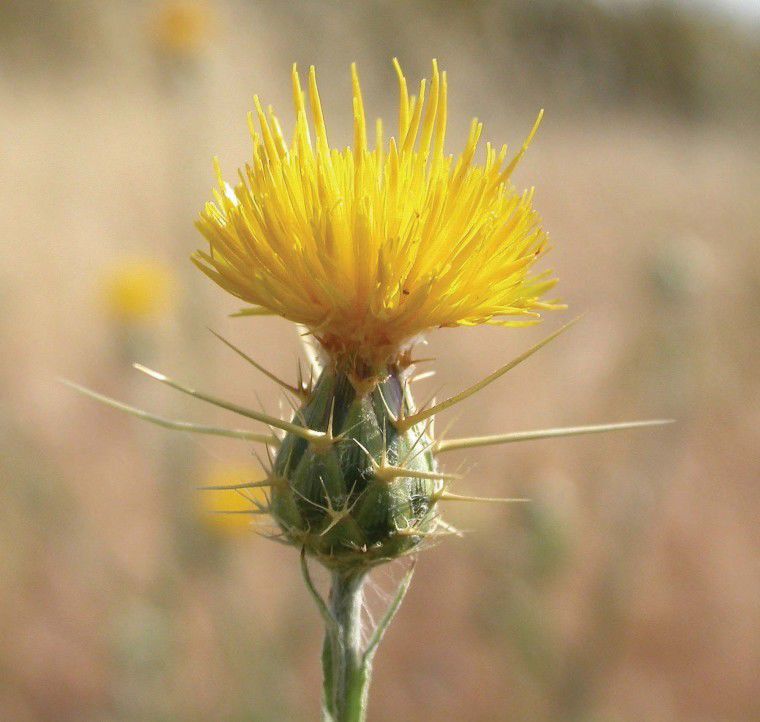 They are Mediterranean sage and Iberian starthistle.

More on the new ones and some familiar pesky plants:

Were seeing a lot of this in the Long Creek area, some in the Dayville area along the South Fork, and a little in Fox Valley. It spreads very rapidly, and is a big weed of concern, said Mike Martin, noxious weed program coordinator for Grant Soil and Water Conservation District.

Originally from Europe, this gray wooly-leaved plant from the mint family, grows to 2-3 feet tall. Its found in pastures, meadows and other open areas. It flowers from June to August. When mature, it resembles a tumbleweed. A single plant can produce thousands of seeds, which are dispersed when winds blow the tumbleweed-like cane.

A small infestation of the Iberian starthistle was discovered two years ago just over the border into Wheeler County, on the mainstem of the John Day River below Spray, said Martin.

Similar to yellow thistle, the Iberian starthistle much more difficult to control and aggressive, he said. Landowners should keep a close eye out for this new invader. Its the second infestation found in state of Oregon.

Found on roadsides, and in pastures and fields, its suspected to have come here from out-of-county hay, Martin noted.

This plant grows over 6 feet tall. Its purple flowers have straw-colored, spinelike projections. Infestations can pose a problem by outcompeting more desirable vegetation for moisture and nutrients. It can also reduce forage for wildlife and livestock.

Issues with Medusahead rye occur in upland areas, where soil has a high clay content. It outcompetes other grasses by taking more of the moisture before perennials grasses have begun to grow. It is rich in silica and becomes unpalatable in late spring for cattle or sheep. When land is invaded by this grass, it becomes almost worthless, supporting neither native animals, birds or livestock, Martin said.

The structure of Medusahead rye can injure eyes and mouths of grazing animals. It also changes the temperature and moisture dynamics of soil, greatly reduces seed germination of other species, and creates fuel for wildfires.

Treatments for Medusahead rye can be effective, depending on the soil, said Martin. Washington State University is working to test soil bacteria that will hopefully be one of the silver bullets we need for this weed, he said.

This is a highly-toxic plant once promoted as an ornamental for the yard. Touching the plants white sap can result in rashes, swelling and blistering of the skin. In addition to being a human health concern, it also displaces desirable native species. It is found in the gardens of Grant County, but has also spread to public lands and is creeping along Highway 395 toward Bear Valley, Martin said.

There are about 14 sites of perennial pepperweed in scattered areas across Grant County, said Martin. It appears to be coming from out-of-county hay. It colonizes rapidly, and degrades nesting habitat for wildlife and displaces desirable species in natural areas and hay meadows. It lowers digestibility and protein content of hay and inhibits grazing. Infestation can be so damaging that it significantly lowers crop land values.

White top, also known as hoary cress, is one of the more alarming noxious species, said Martin. A deeply-rooted perennial, the plant spreads easily and must be aggressively fought.

It is a big weed of concern, but it also can be controlled, said Martin. It takes about three years to knock it back to an easily managed size. Its a little more expensive to control, but if its not controlled, it just takes over. All it takes is a drive in late spring through the Unity area or other parts of Baker County to see how bad an infestation can be if its not controlled.

A rhizomerous plant which grows by both its seeds and roots, white top travels from place to place as the familiar burrs that many find attached to their shoelaces after a hike.

The noxious weed is on Oregons B-list for noxious weeds, which means it should be eradicated wherever it is found. It thrives on both upland and irrigated ground. In its rosette stage of growth, white top can be identified by jagged leaves.

White top was introduced to the U.S. from Europe in the late 19th Century and has invaded nearly every state in the lower 48. Eradication will help protect property, livestock, native plants, and wildlife, Martin said.

Yellowstar thistle, often called the weed that ate California up, is limited in number in Grant County, but if it gets established, it could be a major problem, Martin said.

It is toxic to horses, causing chewing disease.

It inhibits growth of desirable plants in pasture, rangeland and wasteland. Parts of northern and eastern California have been invaded by it.

The wasteland weed can live in moist or dry places, and if not controlled, it presses into farmland or forms dense canopies. The biennial thistle is pervasive in Grant County, but if treated correctly, its fairly easy to deal with, and landowners have found success in handling it on their own, said Martin.

For more information on treatment of noxious weeds in Grant County, call the Grant Soil and Water Conservation office at 541-575-1554.

Legal analyst: The Senate should be offended by this argument