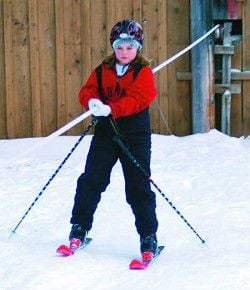 Kailey Kell gets a ride up the hill on the rope tow on Dixie Mountain. The Eagle/Luke Johnson 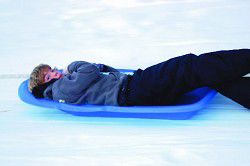 Garth Neal relaxes and lets the rope tow do all the work on his way up Dixie Mounain Jan. 26. The Eagle/Luke Johnson

Kailey Kell gets a ride up the hill on the rope tow on Dixie Mountain. The Eagle/Luke Johnson

Garth Neal relaxes and lets the rope tow do all the work on his way up Dixie Mounain Jan. 26. The Eagle/Luke Johnson

DIXIE SUMMIT - Grant County residents who like to ski may get frustrated by the time-consuming drive to the major ski resorts - and the ticket prices. Enter the Dixie Mountain rope tow.

While not a full-fledged ski resort, the Dixie ski area offers a cheap, fun alternative to high-priced resorts and it's close to town. The tow is just eight miles east of Prairie City off Highway 26 at Dixie Summit.

A private club, Starr Ridge Winter Sports, operates the rope tow, but all skiers are welcome. The club charges $3 per day or $35 for a season pass.

Prairie City resident Gary Rapp does much of the maintenance and operating of the rope tow but he said 25-30 other volunteers help out. The facility includes the rope tow and an indoor clubhouse, which has a woodstove and is a place where skiers can rest up.

"Anyone could come up here and bring their family and spend the day," said Rapp. "It's just a real nice place to spend the day."

The rope tow pulls skiers approximately 600 feet up a steep slope and the run to the bottom features several jumps and railings for those adventurous enough to try a trick or two. The rope tow is primarily for skiers and snowboarders, but when the crowd thins out sledders may get a chance, too, Rapp said.

"It's okay for people to sled if there aren't many skiers," said Rapp. "But if there are a lot of people out there it can be dangerous because you can't control a sled and somebody could get hurt."

According to Rapp, the rope tow has been in operation for almost 30 years.

"When it first opened, there were crowds of people here all the time," said Rapp. "I don't think as many people know about it now, so we're trying to spread the word and let people know that it's here."

Anyone wanting to use the rope tow can call Gary Rapp for information at 820-3694 after 3 p.m.

Number of COVID-19 patients in Wisconsin increases; more than 1,000 hospitalizations