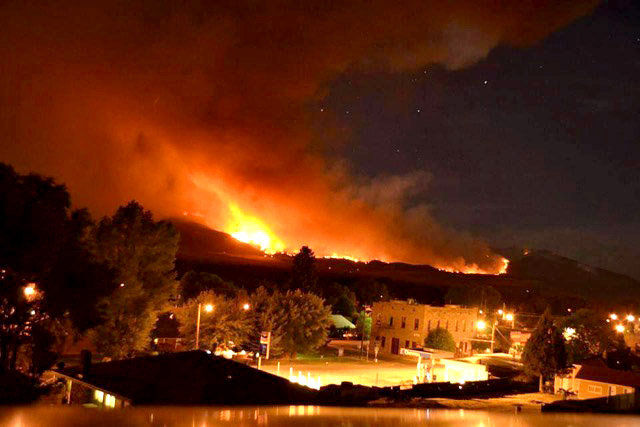 As flames approach the hills behind Prairie City, buildings in town glow in the fiery light 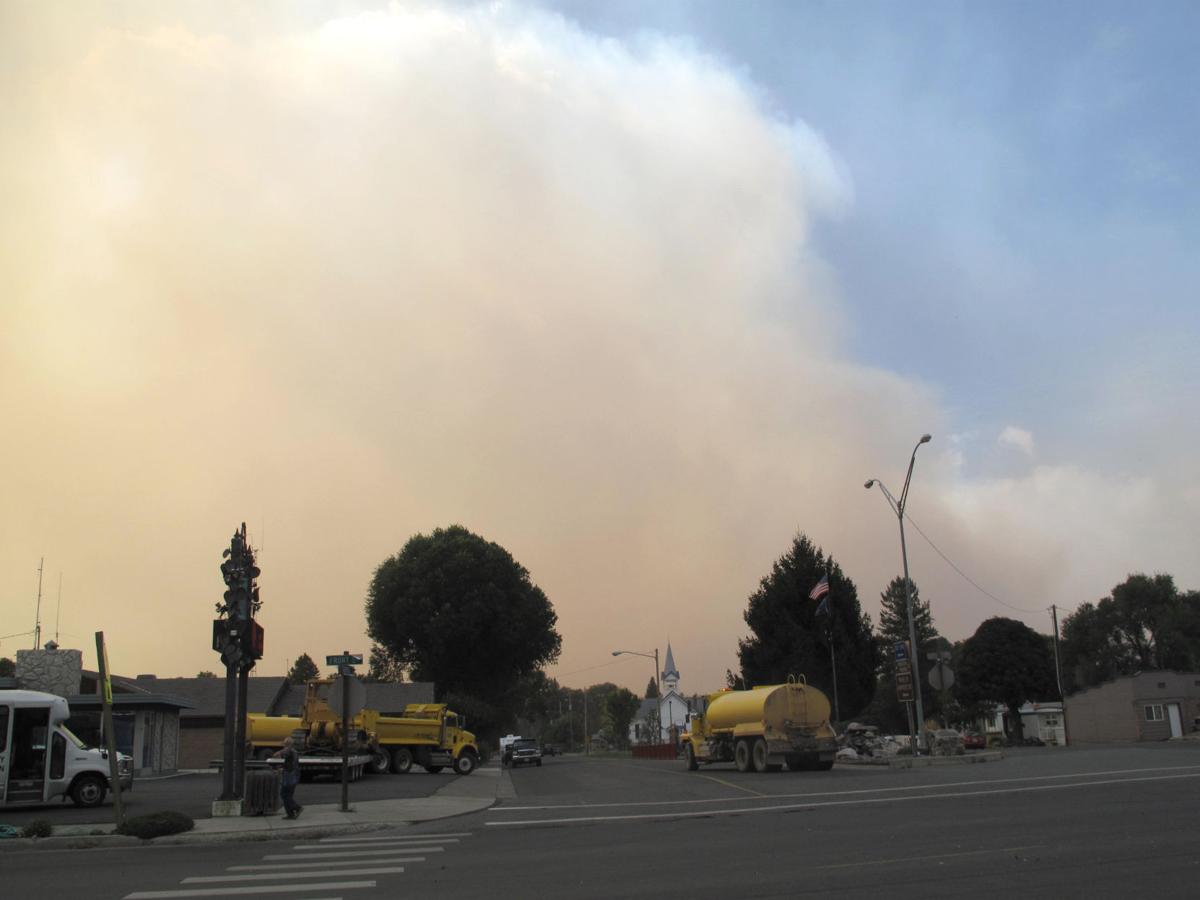 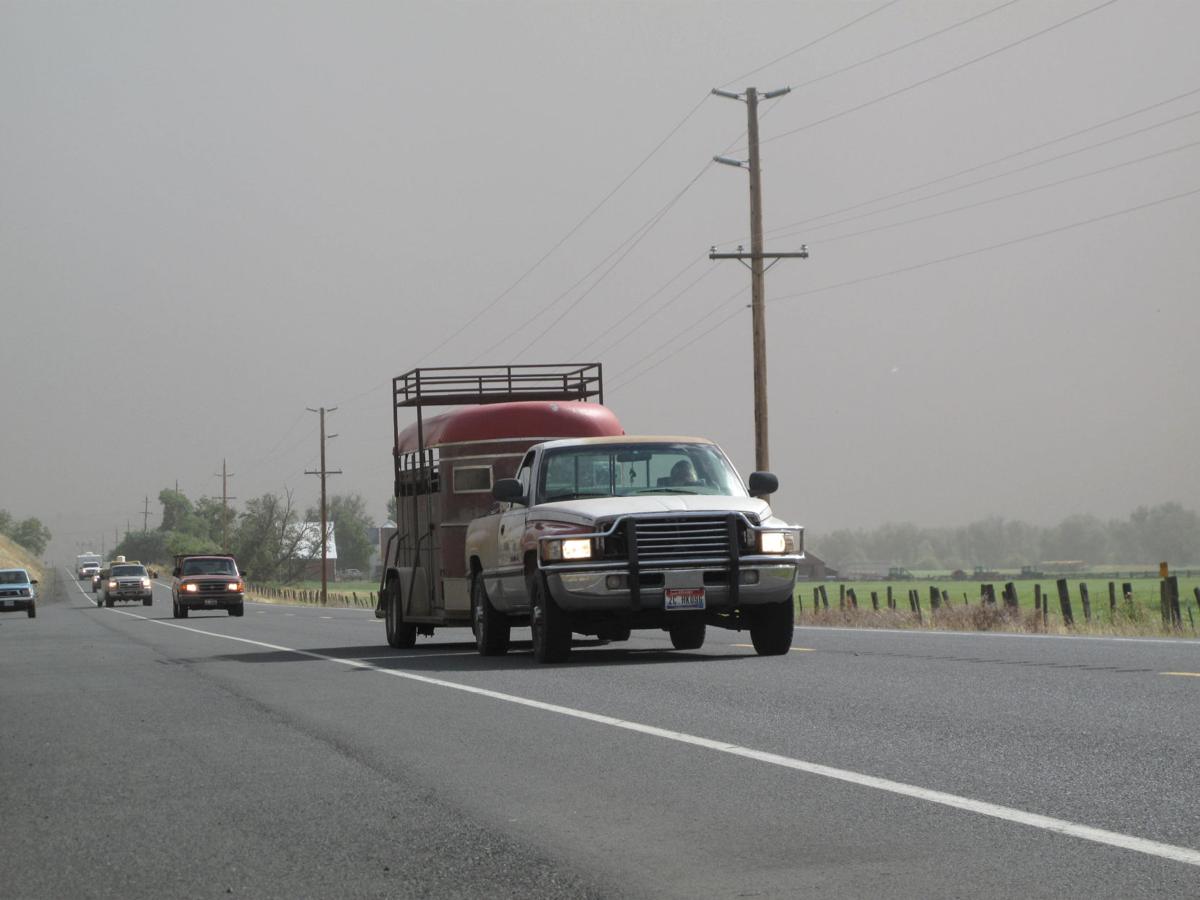 A convoy of vehicles heads out of Prairie City on a smoke-filled Saturday, after officials tell residents to evacuate immediately. 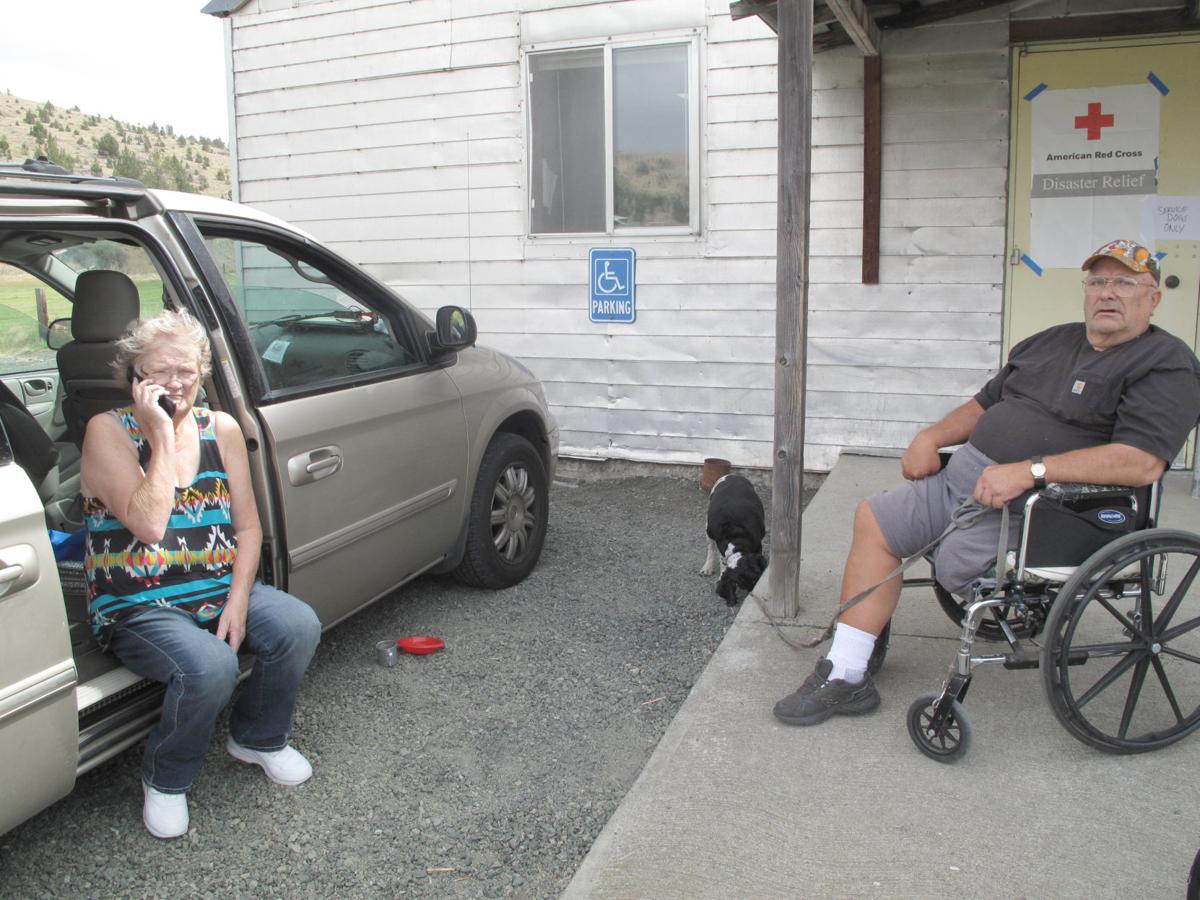 Yog Harris and his wife, Dusty, spent time at the Red Cross shelter set up in Mt. Vernon following the evacuation of portions of Prairie City. 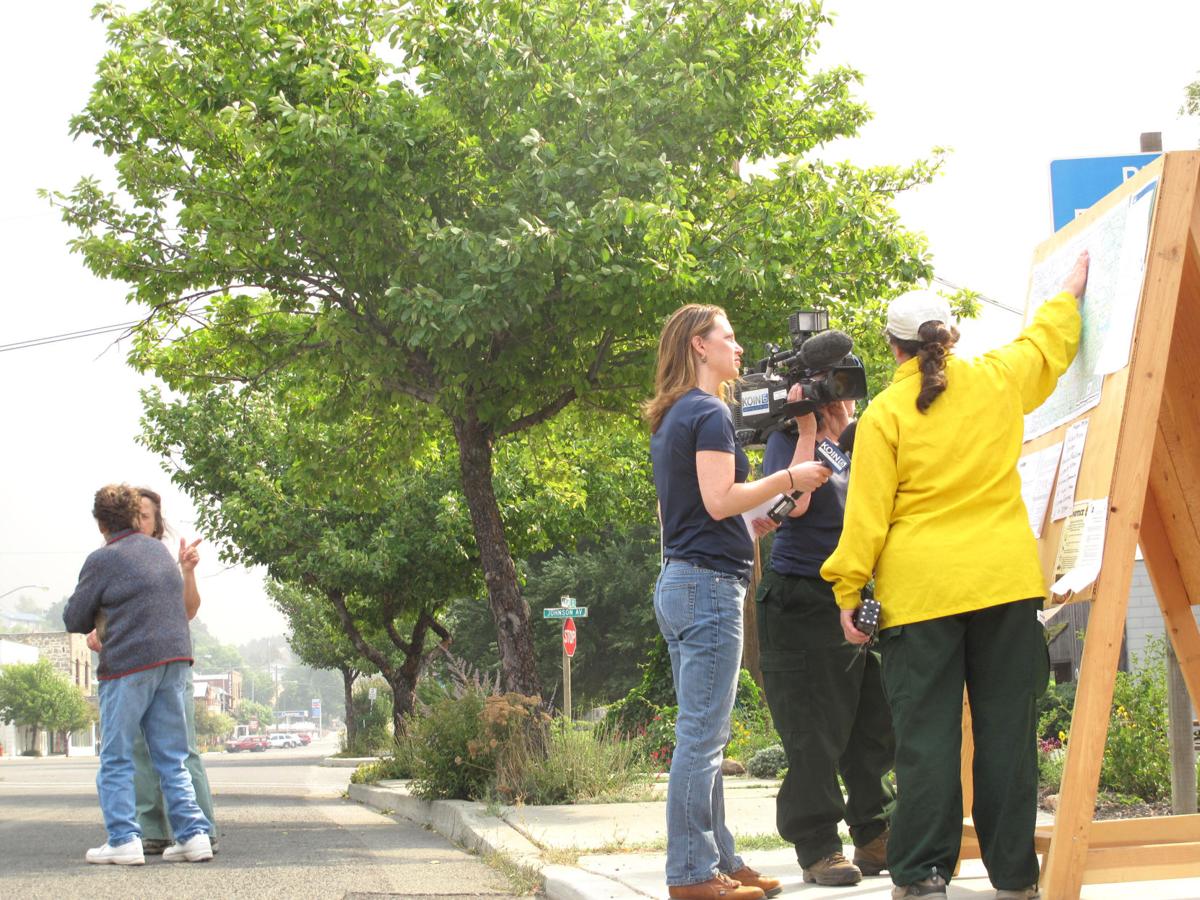 An information board was set up to update residents and the media during the evacuation in Prairie City Saturday.

A change in the weather Sunday afternoon reveals the blackened hillsides of the Strawberry Mountain Wilderness in this panoramic overlooking the southern section of Prairie City from the east edge of town.

As flames approach the hills behind Prairie City, buildings in town glow in the fiery light

A convoy of vehicles heads out of Prairie City on a smoke-filled Saturday, after officials tell residents to evacuate immediately.

Yog Harris and his wife, Dusty, spent time at the Red Cross shelter set up in Mt. Vernon following the evacuation of portions of Prairie City.

An information board was set up to update residents and the media during the evacuation in Prairie City Saturday.

A change in the weather Sunday afternoon reveals the blackened hillsides of the Strawberry Mountain Wilderness in this panoramic overlooking the southern section of Prairie City from the east edge of town.

After watching a raging wildfire consume their neighbors’ properties to the south and west of them for two weeks, Prairie City residents experienced their own trial by fire last weekend.

It took only a switch in wind direction for the fire to turn onto the ridge just above the town, the flames so brilliant against the night sky that the buildings below glowed in the fiery light.

Streets filled with smoke. Early-morning sirens scared residents out of bed. Half the town received orders to evacuate immediately; the other half was told to prepare for evacuation any minute.

In the smoky haze, headlights appeared as a convoy of trucks and cars, filled with prized possessions and random household goods quickly thrown into trunks, began moving west, down the highway.

Meanwhile, hundreds of firefighters headed east toward the fire.

The fight to save Prairie City was on. Here is that story, hour by hour:

5:30 p.m.: During a community briefing in Prairie City, fire officials alert residents about the incoming high winds and the potential for the fire to change direction.

Prairie City Fire Chief Marvin Rynearson is in bed when he hears the wind.

“The hair stood up on the back of my neck,” he said.

He spends the next few hours on his porch, watching. Concerned residents and firefighters on the front line update him on the fire’s movement.

4:42 a.m.: The operations section chief of the Great Basin Incident Management Team is notified by the night operations division supervisor that fire activity has increased significantly due to the high winds. The message goes up the chain of command quickly.

Resources are re-assigned from other parts of the fire and begin shifting toward Prairie City.

That includes 11 dozers, two skidgens, multiple water tenders, supervisors and medics. Three hotshot crews and six hand crews from adjacent divisions are shifted to protect homes, allowing other resources to respond to the wildfire in the grassland.

“Visibility dropped from several hundred yards to about zero real quick,” he said. “I’ve never seen fire behavior like this before.”

5:12 a.m.: Rynearson receives notice from firefighters near the northern part of the blaze that embers are hitting grassland areas south of Prairie City. He decides to wake city residents and alert them to what’s happening.

An ember storm has ignited grassland south of town, and the fire is advancing quickly toward Prairie City.

5:20 a.m.: Rynearson calls dispatch from his home and orders the city’s siren to begin ringing. The siren goes off immediately, and Rynearson orders the alarm to cycle several more times.

“I wanted everyone to be wide awake,” he said.

Within five minutes, mutual aid sirens in nearby cities, including John Day and Canyon City, are also going off, alerting local volunteer firefighters to what’s happening. They begin to rush toward Prairie City.

“We started waking up state, volunteer and our own resources to try to get them out there quickly,” said Jeff Surber, a Great Basin Incident Management Team operations section chief.

“As soon as I heard the fire alarm, I jumped out of bed, shaking, and grabbed up the kids,” she said. “I left my money, wallet and everything else in the house and just got the kids and ran.”

“You could feel the heat of the fire and smell the smoke,” said Pat Shull, whose home is at the very southern edge of Prairie City. “You could feel it closing in.”

5: 30 a.m.: Palmer has already begun ordering parts of Prairie City to be evacuated, and the rest of town is on a Level 2 “be ready to leave at a moment’s notice” order.

Palmer said the evacuation was orderly.

“Neighbors helped neighbors. I think everyone knew what was coming.”

5:50 to 6 a.m.: The firefighters’ morning shift-change briefing starts early, and additional crew members from base camp in John Day skip breakfast and head toward Prairie City.

A convoy of evacuated Prairie City residents makes its way west, as firefighters stream east into the city.

7 a.m.: By this time, many resources, including volunteer firefighters from nearby cities, are on the front lines, battling hard to save the town.

Nervous residents on a Level 2 evacuation order prepare for the signal to leave immediately.

“I have one foot out the door. I’m ready to go if they tell me to,” said local resident Steve Smith.

10 a.m.: Rynearson is confident firefighters have blunted the fire’s advance on Prairie City. He pulls local resources in for lunch and a briefing at 11:30 a.m. and then sends four units back out to assist in creating a safety zone for the town.

4 p.m.: Rynearson and Palmer begin notifying residents they can return to their homes, and the entire city is placed on a Level 2 evacuation order.