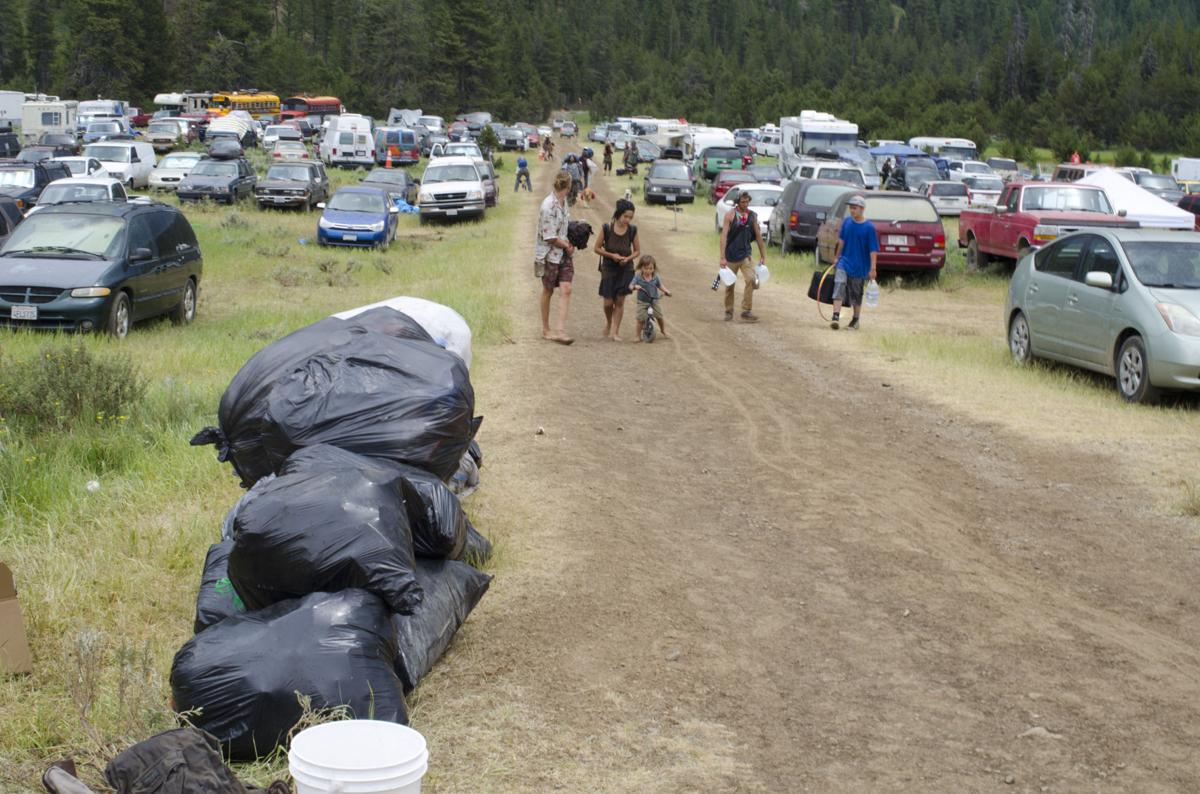 The Eagle/Rylan Boggs A pile of garbage prepared for pickup at the Rainbow Gathering on Monday, June 26. 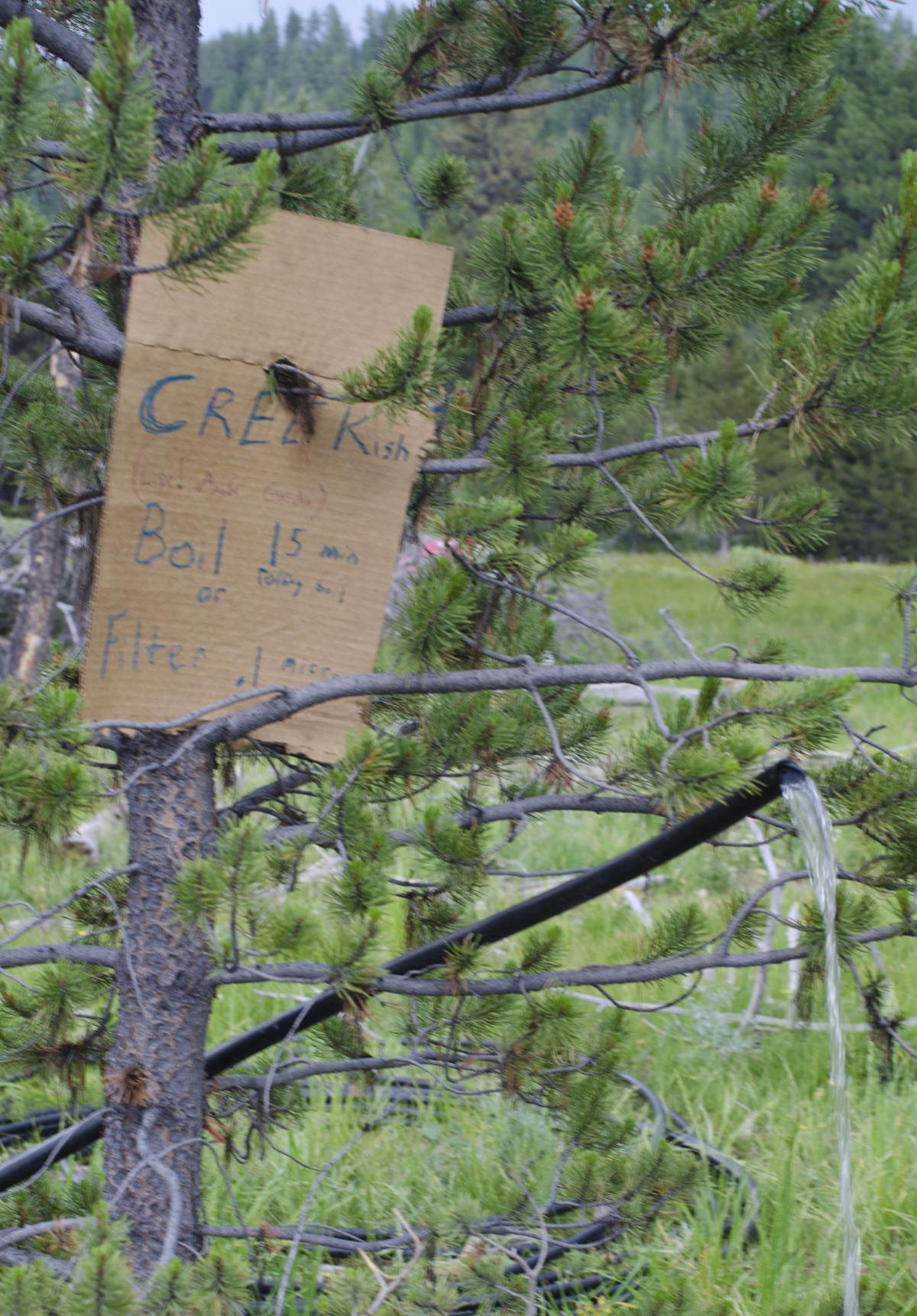 The Eagle/Rylan Boggs A hose brings water in from a creek at the Rainbow Gathering on Monday, June 26. 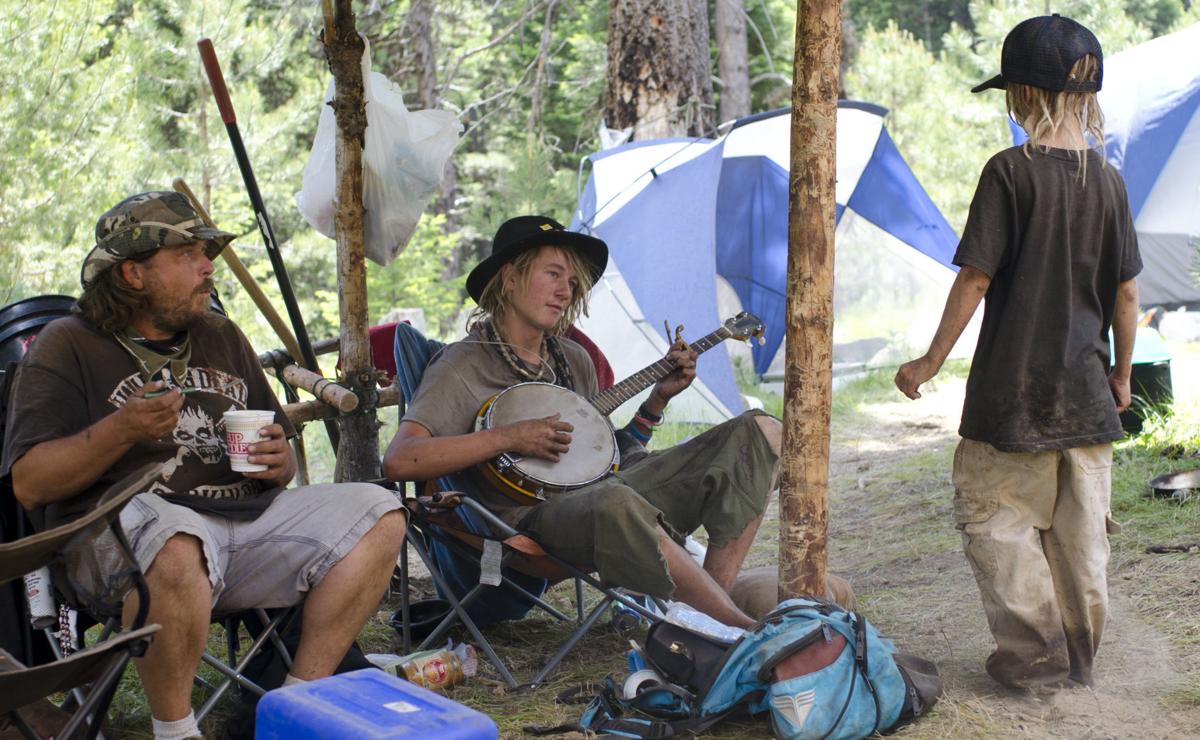 The Eagle/Rylan Boggs Rainbow Gathering attendees relax at their camp on Monday, June 26. 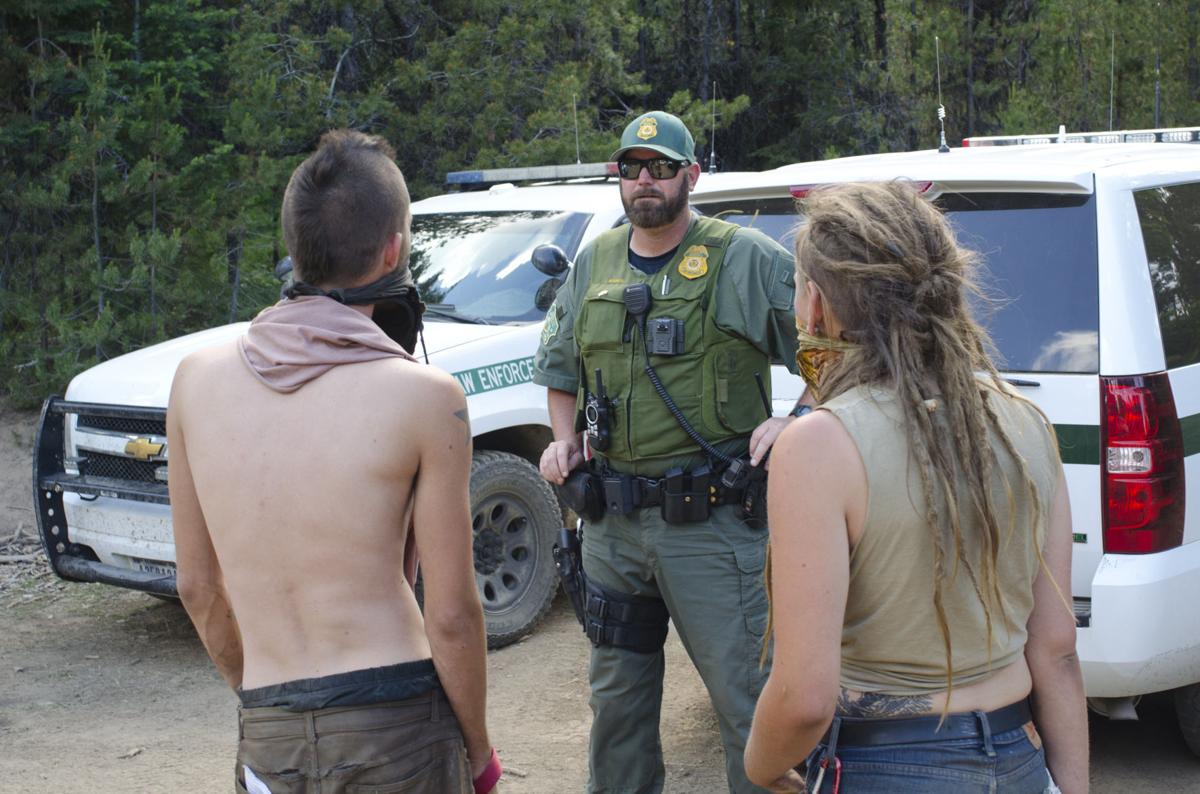 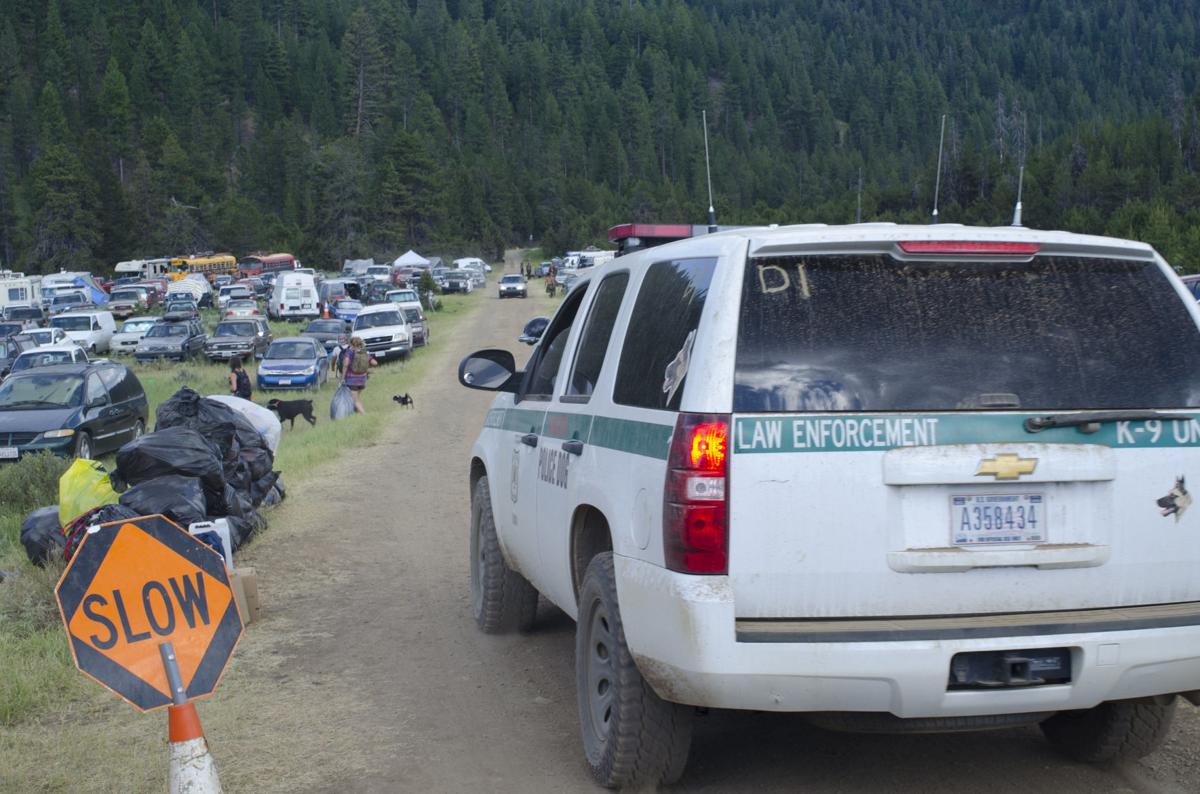 The Eagle/Rylan Boggs A Forest Service vehicle heads toward the entrance of the Rainbow Gathering on Monday, June 26.

The Eagle/Rylan Boggs A pile of garbage prepared for pickup at the Rainbow Gathering on Monday, June 26.

The Eagle/Rylan Boggs A hose brings water in from a creek at the Rainbow Gathering on Monday, June 26.

The Eagle/Rylan Boggs Rainbow Gathering attendees relax at their camp on Monday, June 26.

The Eagle/Rylan Boggs A Forest Service vehicle heads toward the entrance of the Rainbow Gathering on Monday, June 26.

Rainbow Gathering attendees have vowed to leave the land better than they found it, but Forest Service officials said such a large group in such a small space will negatively impact the ecosystem.

Up to 20,000 attendees are expected at the loosely organized, unauthorized gathering July 1-7 in Flagtail Meadow off of Forest Road 24 south of John Day. By Monday, more than 2,500 were at the site.

Also at the site are a variety of sensitive resources — heritage, wildlife, botanical, range, aquatic — that will suffer from the influx, Forest Service Agency Administrator Ryan Nehl said.

“Despite best intentions, the amount of impact from that many people in that small of space is going to be detrimental,” he said. “There will be impact, and that’s what’s been expressed to these individuals who profess their concern for the environment: It’s a large forest, disperse.”

Forest Service resource specialists have flagged off certain areas to try to protect resources. Blue Mountain District Ranger Dave Halemeier and National Environmental Policy Act Planner Sasha Fertig spent days trying to protect the site but said in a statement in response to questions from the Eagle many concerns remain.

“The unauthorized users admit that they cannot control each other and that once the masses show up all they can do is try to educate,” they said. “With the area they chose folks are going to be drawn to the sensitive areas and damage will occur.”

Halemeier and Fertig said a wide variety of problems could occur:

• Heritage resources are at risk from digging for latrines and compost pits.

• Birds may abandon nests with young. Big game animals are at risk from increased traffic and are being displaced to less populated areas. Small mammals’ habitat is being disturbed.

• The introduction and spread of invasive weeds may impact plants. Foot traffic on sensitive meadows also retards the ability of plants to occupy the site.

• Range resources are impacted by the reduction of the pasture’s forage component, and livestock will disperse on trails created by gathering attendees.

• Redband trout offspring are emerging from eggs in the gravel of Flagtail Creek, and increased sediment in the water churned up by an abundance of people in the stream could diminish their ability to take oxygen from the water — or blanket the eggs in the gravel, causing death. Waste and biological hazards buried at the site could also infiltrate the water over time.

The Forest Service recommends one latrine for every 100 people, or 100 latrines for 10,000 attendees. Halemeier and Fertig said that could cause problems long after the attendees leave.

“The site will never be back to normal,” they said of the latrines. “That amount of waste would have never been on the site. Bacteria and potential leached effects will be long-term due to our soil types in the area.”

This type of event would typically require an environmental assessment or impact statement, as required for any ground disturbing activity on a national forest, which would take one to three years to complete due to the “scale of potential impacts and resource values in the area,” they said. Because the gathering is not following the legal process, the Forest Service is responding outside of the normal process on short notice to protect the resources, more like a natural disaster.

Gathering attendees refused to sign a special use permit, required for groups of 75 or more to address resource and other concerns. The Forest Service issued a design criteria document listing rules to mitigate damage to the resources, which attendees also refused to sign.

Nehl, the agency administrator, said although the event is unauthorized the Forest Service must weigh public safety and the safety of its officers when determining whether to take action on a noncompliant group. He said 20,000 attendees versus a small number of officers were “not good odds.”

Nationally, the Forest Service budgets $500,000 each year to respond to the Rainbow Gathering, which has been held annually on national forest land since 1972. The group has claimed its gatherings are protected by the First Amendment.

“It’s frustrating for us too that these folks are not complying,” Nehl said. “We understand we expect other forest users to comply with our rules. We want to be able to look them in the eye and say you were held to the same standards.”

Trump berates reporters when asked about report by his own administration

Americans battle to cope with life's challenges amid virus