<I>Eagle photo by Tim Adams</I><BR>Grant Union fans react with a round of applause as the final out in the third inning is recorded on a strikeout. Judy Schutte, standing, sang the national anthem before the game. 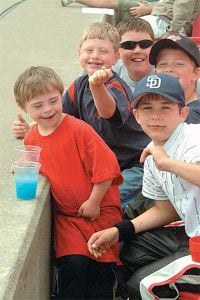 <I>Eagle photo by Tim Adams</I><BR>Grant Union fans react with a round of applause as the final out in the third inning is recorded on a strikeout. Judy Schutte, standing, sang the national anthem before the game.

KEIZER - Grant Union fans of all ages were out in force at Volcanoes Stadium on June 4 to cheer the hometown team to victory in the Prospectors' 9-2 win over Salem Academy in the championship game of the OSAA/US Bank/Les Schwab Tires Class 2A/1A baseball playoffs.

Community support and team spirit runs deep in this part of the state and the baseball tradition at Grant Union will surely continue for years to come as several infant children were among the crowd to witness their first Prospectors' state championship victory.

The stands along the third base line behind the Grant Union dugout were packed with fans ranging from parents of players on the team, to couples with younger children, who will be wearing Prospectors' uniforms a few years down the road, to just plain Grant Union fans, both young and old, who have followed the fortunes of the team all season long.

Everyone had praise for the players and for the accomplishments of Art Thunell, who was coaching the final game in his illustrious career.

Dusty Williams and his wife, Stephanie, who are both involved in Grant County Youth Baseball, brought their sons, Cody and Blaine, to the game and were among the first fans through the gate.

In some ways the championship game was the end of an era for a couple of Grant Union parents.

"It's kind of an end for me, but it's also a beginning," Michelle Labhart, Eli McClure's mother said. "This is Eli's last game, but my youngest, Scout, is 6 and in about 12 more years, he'll be up here. This is my second trip over here to the championship game. Eli played when he was a sophomore and he was the designated runner so he didn't get in too much. It's Eli's birthday today and he couldn't have a better present than to win the championship. This is really exciting."

Many parents brought along their lucky charms to help the team.

Toby Thomas' mother, Lloydene, was wearing her Grant Union shirt, with a pair of buttons from when Toby played Little League baseball.

"We're ready to roll today," she said. "Toby called me last night and said, 'I've never been so ready to play in all my life, Mom.' We just tanked up at Outback Steakhouse and I'm ready to go."

Grant Union students Piper Krausse, Brenna Caughlin and Haley Hueckman said they got up early to drive over to Salem.

"We left at four o'clock this morning and that was too early but it's worth it, very much," Krausse said.

"I've got all my superstitions going for me right now," Hueckman said. "I bought a sweatshirt before the end of the game the last time and it's never really worked out. This year, I'm waiting until after the game to do my merchandising."

The Prospectors also had other "lucky charms" going for them as well.

"We're sitting in the dugout on the third base side this year," Chris Labhart said. "The last two times, we were on the first base side. On top of that, Judy (Schuette) is singing the National Anthem. We've got everything going for us today."

Praise for Thunell and his 591 wins came from several sources, both from his peers at Grant Union High School and from fans who have followed the fortunes of the Prospectors over the years.

"I want Art to go out so bad (by winning this game)," longtime Grant Union supporter Harry Lewis said. "This would be the perfect way to go out. He's accomplished so much in all the years he's been in John Day."

"Oh, man, this is fantastic," Grant Union's Principal Mark Witty said. "I'll tell you, this group of kids has done a fantastic job and I'd like to see them win."

Even Lindsey Wyllie from KJDY Radio, who was broadcasting the game and along with yours truly wore the same articles of clothing we'd worn to the first game of the year when the Prospectors beat Oakland 20-1 at the Icebreaker Tournament.

"I've got on the same plaid shirt and the same pants I wore to the first game," Wyllie said.

As for me, I had on my Yomiuri Giants hat from the Japanese Professional Baseball League.

As always, the Prospectors wore their red undershirts with the words, "Win the Last Game" printed on the back and that's exactly what they did.

No topic off limits for the 'Queen of Afro House'