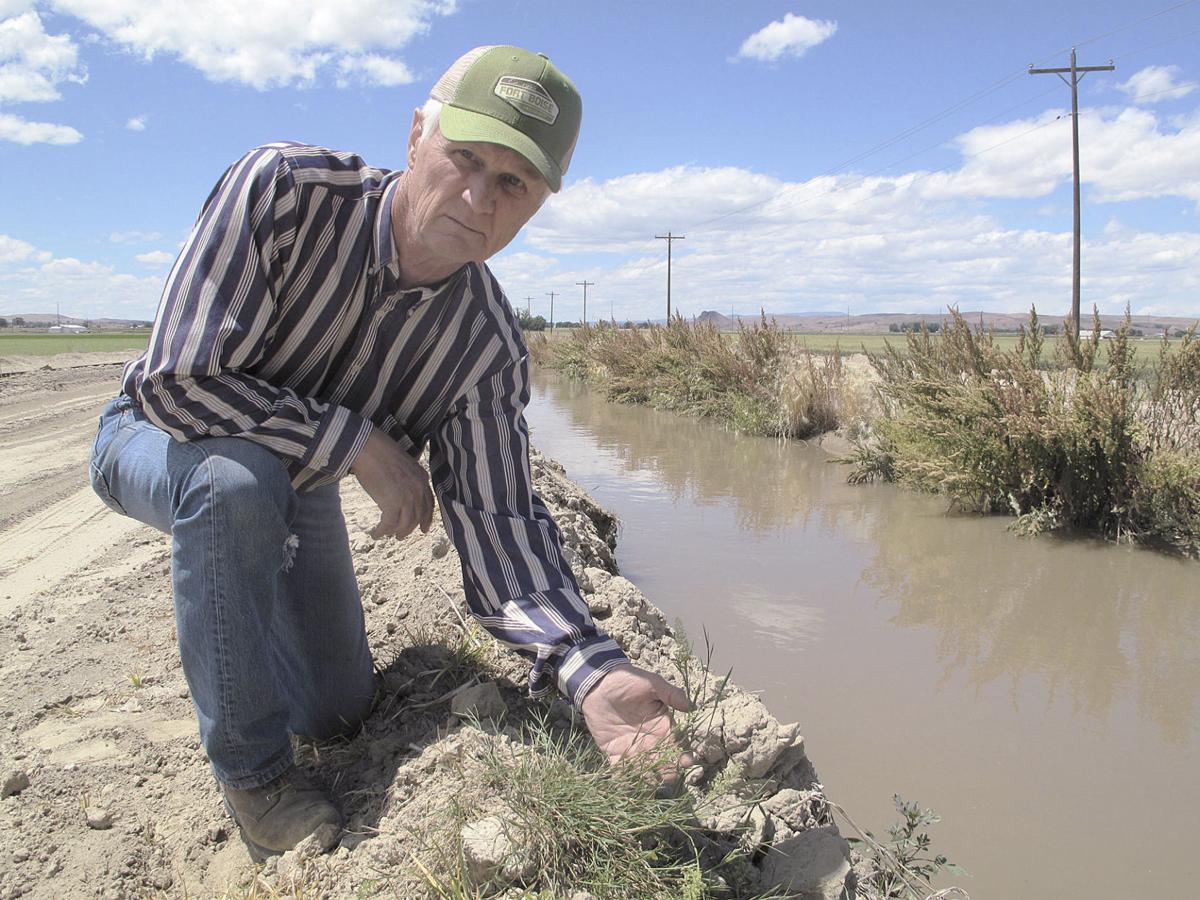 Malheur County farmer Jerry Erstrom points out a genetically engineered creeping bentgrass plant June 14 on an irrigation ditch bank near Ontario. The grass, which was genetically modified by Scotts Miracle-Gro Co. to resist the Roundup weed killer, escaped from field trials in 2003 and has taken root in Malheur and Jefferson counties in Oregon and part of Canyon County in Idaho. 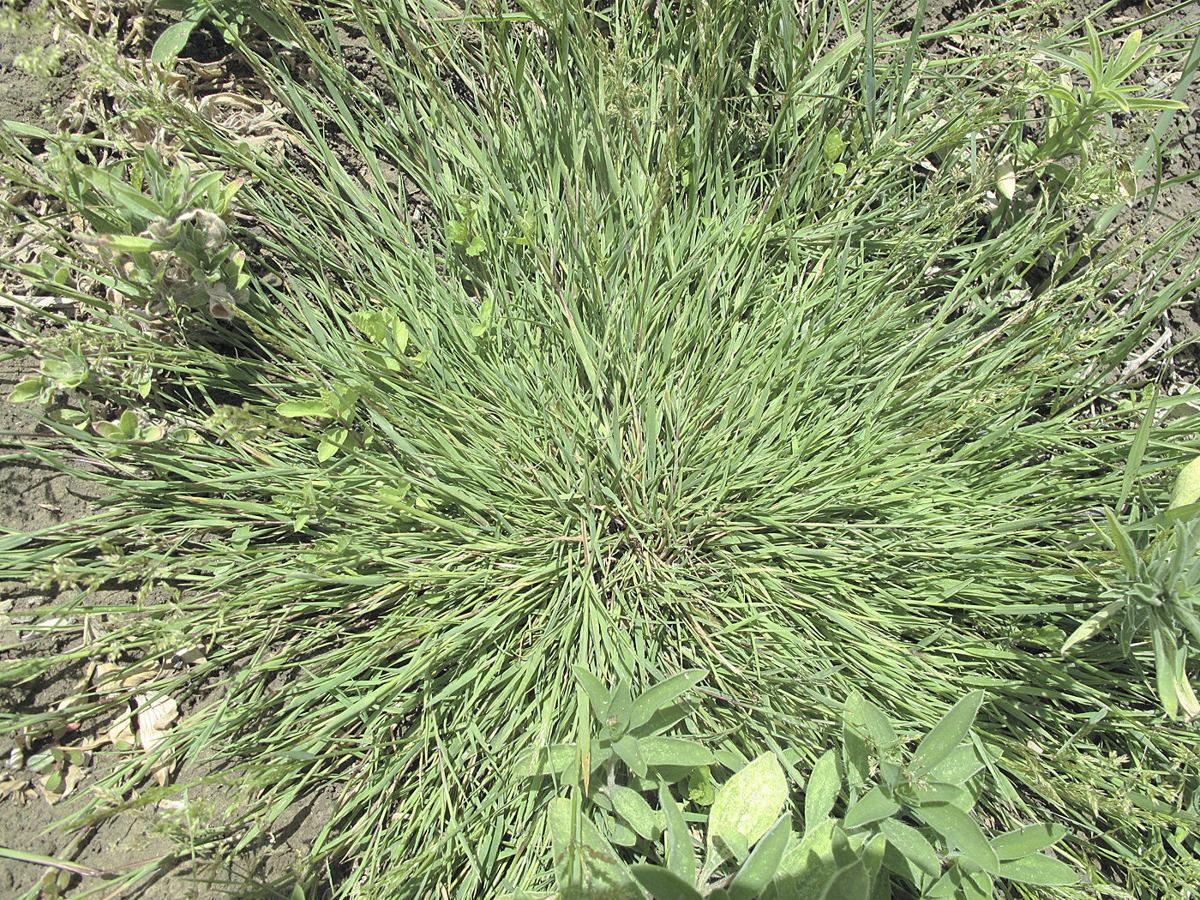 A genetically engineered creeping bentgrass plant grows in an onion field just south of Ontario, on June 14. Seeds the bentgrass escaped from field trials in 2003 and took root in Malheur and Jefferson counties in Oregon and part of Canyon County in Idaho. 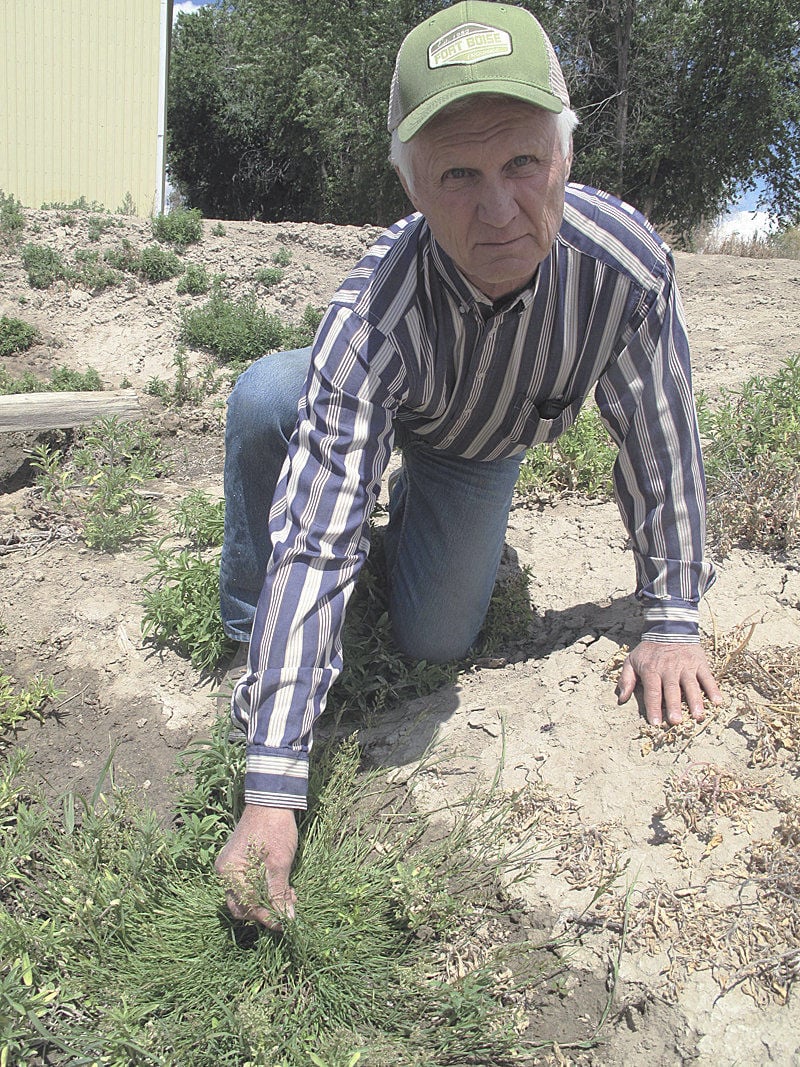 Malheur County farmer Jerry Erstrom points out a genetically engineered creeping bentgrass plant June 14 in an onion field just south of Ontario. The grass, which was genetically modified by Scotts Miracle-Gro Co. to resist the Roundup weed killer, escaped from field trials in 2003 and has taken root in Malheur and Jefferson counties in Oregon and part of Canyon County in Idaho. 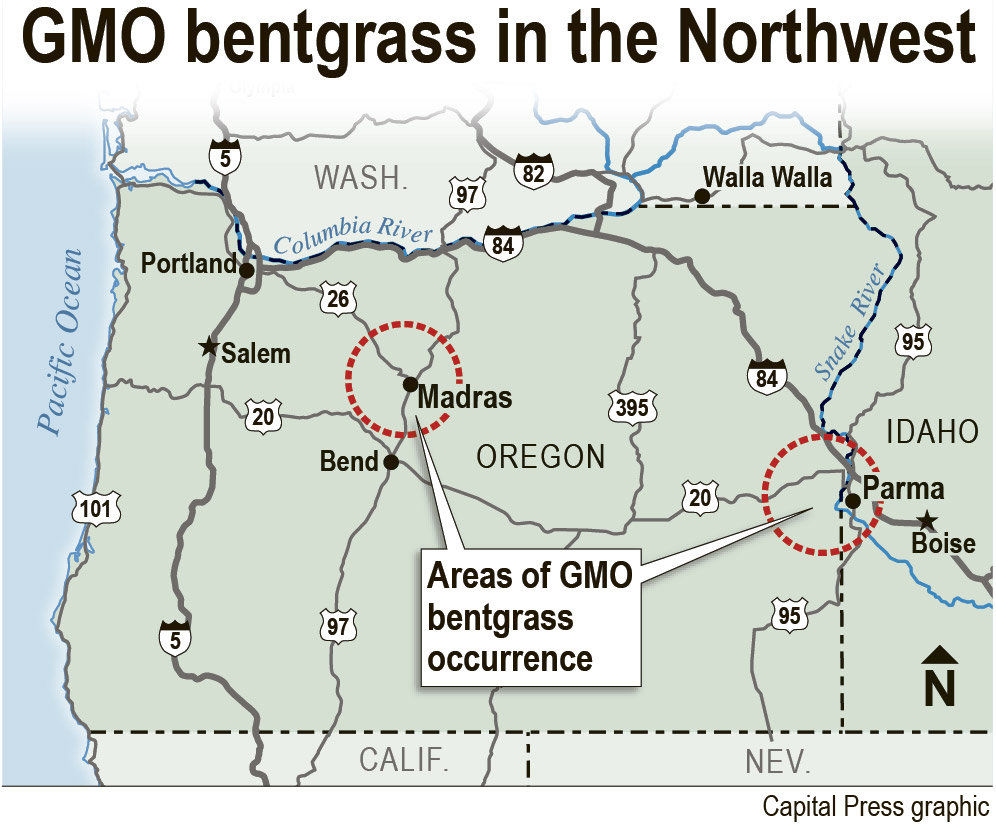 Malheur County farmer Jerry Erstrom points out a genetically engineered creeping bentgrass plant June 14 on an irrigation ditch bank near Ontario. The grass, which was genetically modified by Scotts Miracle-Gro Co. to resist the Roundup weed killer, escaped from field trials in 2003 and has taken root in Malheur and Jefferson counties in Oregon and part of Canyon County in Idaho.

A genetically engineered creeping bentgrass plant grows in an onion field just south of Ontario, on June 14. Seeds the bentgrass escaped from field trials in 2003 and took root in Malheur and Jefferson counties in Oregon and part of Canyon County in Idaho.

Malheur County farmer Jerry Erstrom points out a genetically engineered creeping bentgrass plant June 14 in an onion field just south of Ontario. The grass, which was genetically modified by Scotts Miracle-Gro Co. to resist the Roundup weed killer, escaped from field trials in 2003 and has taken root in Malheur and Jefferson counties in Oregon and part of Canyon County in Idaho.

It doesn’t take him long to find one. And then another, and another.

The bentgrass was genetically engineered to withstand applications of glyphosate herbicide, which makes it difficult to kill.

Farmers such as Erstrom worry it will ultimately take over the countryside, clog irrigation ditches and affect shipments of crops to nations that don’t accept traces of genetically modified organisms, or GMOs.

“I’ve been doing weeds for 25 years and I promise you in five years this (county) will be inundated with it,” said Erstrom, chairman of the Malheur County Weed Board.

The bentgrass was meant for golf courses. Instead, after escaping from field trials 13 years ago, it has taken root in Malheur and Jefferson counties and ignited a debate about who should be responsible for controlling it in the future.

Scotts Miracle-Gro Co., which was developing the grass for use mainly on golf course greens, said it is committed to collaboratively working with growers and irrigation districts to control and eradicate the grass where possible.

But some farmers believe a 10-year agreement Scotts recently reached with USDA’s Animal and Plant Health Inspection Service will allow the company in a few years to essentially walk away from any responsibility for controlling the plant.

“I think Scotts should be liable for what they did but they are pretty much walking away from it,” said Malheur County farmer Rod Frahm. “Personally, I think since they created the problem, they should take care of it.”

Molly Jennings, director of public affairs for Scotts, told Capital Press in an email that claims the company is walking away from its responsibility are unfounded. “We are committed, and have been, to a collaborative, long-term management plan with local landowners, irrigation managers and others.”

In an email response, USDA Public Affairs Specialist Andre Bell also rejected the notion that the agreement allows Scotts to walk away from the problem.

Scotts, in conjunction with Monsanto Corp., was developing the genetically modified creeping bentgrass to be resistant to glyphosate, the active ingredient in Roundup, Monsanto’s popular weed killer.

But the grass escaped from field trials in 2003 due to what USDA describes as a “wind event” and took root in Malheur and Jefferson counties in Oregon.

According to Jennings, two wind storms resulted in seed heads scattering from the field trial control area in August 2003.

The plants were identified outside the control area in 2004.

Scotts has been surveying for and controlling the plant for several years.

According to Scotts, the company identified 424 plants in Malheur County and 441 plants in Jefferson County during spring spraying this year. A small number of the plants were found in Canyon County, Idaho, which is adjacent to Malheur County.

During a March meeting with a top USDA official and Scotts representatives, some local farmers and irrigation district representatives challenged the terms of the agreement, reached in September.

The agreement requires Scotts to continue to survey for and try to eradicate the bentgrass in 2016. In years 2 and 3, the company must provide technical assistance to affected farmers and irrigation districts and provide incentives for the adoption of best management practices to control the grass.

The company will also conduct outreach and education programs.

In years 4 through 10, Scotts will pull back a little while continuing to analyze the situation, educate growers and provide technical assistance, Sid Abel, assistant deputy director of USDA’s Biotechnology Regulatory Services, said during the March meeting.

Scotts will continue to work with Oregon State University researchers to try to identify herbicides that can effectively manage the grass, especially in aquatic and semi-aquatic environments.

USDA “essentially let them off the hook,” said Erstrom. “What Scotts is doing to Malheur County is not right.”

The plant proliferates on and in irrigation ditches and is clogging and changing the flow of some ditches, said Erstrom and Frahm, who is on his local ditch board.

“The plant does extremely well on ditch banks,” said Jay Chamberlin, manager of the Owyhee Irrigation District, which provides irrigation water to 118,000 acres in Eastern Oregon and part of Southwestern Idaho. “Once it gets in there, it can contaminate the whole system.”

Because creeping bentgrass is genetically modified, if traces of it end up in alfalfa hay or other crops, they can be rejected by overseas customers that don’t accept GMO crops, Erstrom said.

Between the plant’s impact on irrigation ditches and its possible impact on foreign shipments, “The potential is there for disaster,” he said.

Malheur County declared the plant a “Class A” noxious weed two months ago, which means it’s mandatory for anyone who finds it on his property to control it.

Erstrom said there is now a $100 bounty on any of the bentgrass found in areas where it hasn’t already been detected, such as north of Ontario or along the Snake River.

Jennings said glufosinate is the primary tool used by the contractor hired to control the grass but other herbicides work as well. A list of them can be found online at http://scottsmiraclegro.com/gtcbanswers/

Abel said Scotts has agreed never to sell or distribute the grass variety and USDA has documented that all of the commercial grade seed stock has been destroyed, although Scotts was allowed to keep research-grade materials.

At the same time, Scotts has petitioned USDA to deregulate the genetically engineered grass, a move that Erstrom suspects is intended to allow the company to wash its hands of the issue.

Jennings, the director of public affairs for Scotts, said the bentgrass meets all of the scientific and environmental criteria for deregulation and “we believe this is an important step to upholding the gold standard set by the USDA as it relates to the review and approval of all future plants and crops produced through genetic modification.”

Deregulation would also “provide more flexibility in long-term management of this plant,” she added. “If this bentgrass is deregulated, as we think it should be, this will in no way change our commitment to the current management plan for the next decade.”

Jennings said the cost of controlling the bentgrass is modest and involves mostly the cost of the herbicide used to kill it.

She said the company is evaluating the possibility of subsidizing or donating herbicides that manage creeping bentgrass.

“We feel that the plan we have developed will best address the needs of growers and irrigation managers, but we are open to working with stakeholders to develop the best possible approach,” she said.

Abel, of USDA’s Biotechnology Regulatory Services, said the grass will never be eradicated in the affected counties, but it can be controlled.

Erstrom said his concern is that once Scotts stops actively controlling the plant, it will make a comeback and spread rapidly.

The onus will fall on growers and irrigation districts that lack the expertise and financial means to control it, he said.

In a Feb. 17 letter to Scotts officials, Oregon Department of Agriculture Director Katy Coba said that according to the agreement, “after three years all responsibility for (glyphosate-tolerant creeping bentgrass) management, including financial, will fall on growers, irrigation managers and other affected parties whereas Scotts will only be responsible for maintaining a website.”

“ODA is concerned that without Scotts’ leadership and financial support, that research efforts and coordinated control efforts will eventually subside and GTCB population levels will escalate and the area of infestation will expand,” Coba stated.

While ODA and some farmers such as Frahm and Erstrom have concerns about Scotts’ future role in controlling the grass, others say the company has done a good job so far of controlling it.

At the same time, they admit they are concerned about the terms of the agreement with USDA.

“I’m very happy with what Scotts has done at this point,” said Bruce Corn, an Eastern Oregon farmer and member of the Owyhee Irrigation District board of directors. “The concern is that at some point, they would walk away from taking the control measures they are now and (the plant) will come back.”

In the early years after the grass was first discovered in Malheur County, it was everywhere and there were blankets of it in some places, Chamberlin, the Owyhee Irrigation District manager, said. But the local contractor hired by Scotts to control it has done a good job of knocking it way back, he added.

“So far, they have done what they said they would do. I hope that continues,” he said about Scotts. “But the language in the agreement with USDA is very concerning.”