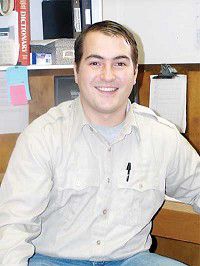 Greg Jackle is an assistant wildland biologist for the Oregon Department of Fish and Wildlife.<I><BR>The Eagle/Patrick Bentz</I>

<I>Contributed</I><BR>Here are some of the goats that Darren Bruning and Greg Jackle observed in September in the Strawberry Mountain Wilderness. Photographed are one nanny and three kid goats-high up-Slide Creek. They observed seven-goats that day: one nanny, three kids, two billies and one unknown. They surveyed the surrounding Rocky Mountain Goat habitat for four hours.

Greg Jackle is an assistant wildland biologist for the Oregon Department of Fish and Wildlife.<I><BR>The Eagle/Patrick Bentz</I>

<I>Contributed</I><BR>Here are some of the goats that Darren Bruning and Greg Jackle observed in September in the Strawberry Mountain Wilderness. Photographed are one nanny and three kid goats-high up-Slide Creek. They observed seven-goats that day: one nanny, three kids, two billies and one unknown. They surveyed the surrounding Rocky Mountain Goat habitat for four hours.

JOHN DAY - Living in a small town can be a major change for a young man from the big city.-Yet Greg Jackle hopes to share his experiences growing up in the Portland area with the residents of John Day, both in his job at the Oregon Department of Fish and Wildlife, and as a member of the Grant County District 3 School Board.

-As part of his job, he monitors the populations of big game animals, including deer, elk, bighorn sheep and antelope, as well as cougar and wolves.

-"I'm pretty blessed with having a pretty diverse district here," Jackle said. He also gets to work with landowner concerns.-

"That's a fairly large part of our business," Jackle said. -

He gets to deal with calls like, "We've got too many deer in the haystack" or "I've got elk coming in, they're wrecking my fences," or "I've got a skunk in my back yard."-

-He's helping residents along Canyon Creek deal with beavers, including connecting them with trappers. -

-"We're not trying to wipe the beaver out," he said. "We'll take a few out and leave some. There aren't a lot of things we humans can do to control nature. We think we can, but we've made a lot of mistakes in the past because we thought we could do that."

-Sometimes his work keeps him hopping.-

"I used to work in Sisters," Jackle said. "I was listening with some telemetry gear, all of a sudden I hear something. It was a warm sunny day in May."-

He looked down and found a large number of small rattlesnakes at his feet.-

"I jumped out of there and came back, looked down over where I was standing."-

He found a large female snake just beyond where he had been standing.-

"She was pretty impressive," Jackle said. "The little ones, too, but they just don't make the same rattle."

-"Probably the most exciting part of my job is doing the spring surveys by helicopter, and counting large quantities of animals," Jackle said.- "It's just eye-opening to get out there and see that kind of stuff. That's the reason we take the angry-landowner phone calls, because we know we have five days in March when we get to go and fly, just count deer and elk and bighorn sheep and pronghorn."

The first year he did that, he was in a small helicopter near Murderers Creek.

"There were hundreds of elk on those flats, it was just amazing," he said.

Jackle, 28, grew up in Milwaukie and graduated from Milwaukie High School. He graduated from Willamette University in Salem in 1999, where he studied biology and also was a walk-on on the football team.-

He started working at a series of temporary jobs, with the Oregon Department of Fish and Wildlife and the National Forest Service, as well as a series of jobs in private industry, before being hired by ODFW as an assistant wildland biologist.--

While working on the Oregon coast, Jackle met his wife, Tiffany, who grew up near Nehalem.-

"She came over here where there's different kinds of cows," Jackle said and laughed. They dated for four or five years before getting married. They have been married for 2 years.-

"It's growing on her, living here," Jackle said. "When she moved here, she didn't know a lot of people. Since then, she's making good friends. I think she enjoys it here."-

"He's awesome, he's a trooper," Jackle said. "They grow so fast. It's amazing what comes out of their mouth, and he's not talking yet."

"Every day I meet new people," he said. "You've got to appreciate the close-knit community, everybody's friendly here, they're not as uptight as people in the city."

-He is also giving back to the community, as a member of the Grant County School Board.- He was appointed to his position in May.-

"With all the seasonal positions, you bounce around so much," Jackle said. "Then, I finally get roots in a place where I want to get involved.- I'm glad I got appointed, because I want to give something back to the community.- My goal is to just to be involved there and make reasonable decisions, taking my experience going through public school."

One of the priorities of the district is to increase the use and teaching of technology.-

"Kids are so technologically advanced, they're trying to start teaching that, and I think that's a big priority," Jackle said. "We're trying to get our kids as competitive in the marketplace as kids in Portland and Beaverton and Eugene and Salem that have all this access to computer applications and such."

The board has also approved the creation of a girl's softball team at Grant Union.-

"That's when we had the most people come and give comments about the pros about why the high school should have a softball team," Jackle said.-"That was really good experience, a lot of people feel strongly about that. Women in this community want a chance to play softball. That's exciting.

-"I hear board members say, I get phone calls every week from parents, and it's kind of nice to be anonymous," Jackle said. "I do know people, but I don't know a lot of people, because my kid's not in school yet. Once he gets in school, I know people are going to call me. I'm not dreading that, but it's kind of nice to have my anonymity and just make decisions on what I think is right, and not have to worry about if I'm making somebody else mad."

Declining enrollment isn't as much of a challenge this year as in previous years.-

"We've been dropping enrollment for so many years, but now I think we've stabilized and may be coming up a little bit this year," Jackle said.- "That will help. You start dropping enrollment, and your money is based on how many kids you have."-

Jackle's personal goals have changed since moving to John Day.-

-"When I was younger, I wanted to get as high up in the agency as possible," he said.-

Now he would be content to be a district biologist.-

"That doesn't mean I don't want to become a manager someday. For now, I see myself doing just this kind of stuff," he said.