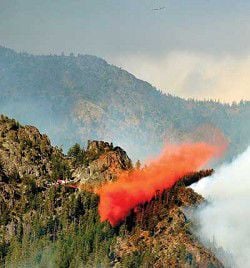 <I>Contributed by Kathy Gillam</I><BR>A plane drops a load of retardant on the edge of the Cougar Creek Fire Sunday, as crews battled the blaze in rugged canyons of the Strawberry Mountain Wilderness. 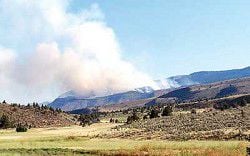 <I>Contributed by Kathy Gillam</I><BR>A plane drops a load of retardant on the edge of the Cougar Creek Fire Sunday, as crews battled the blaze in rugged canyons of the Strawberry Mountain Wilderness.

CANYON CITY - Oregon State Police Sgt. Gordon Larson was enjoying a day off on his ranch south of Canyon City on Saturday, when he heard a helicopter flying low over the hills.

Thinking there might have been an accident requiring an air ambulance, he rushed to the house to check for emergency calls.

It was July 25, and the Cougar Creek Fire was off and roaring from its start about a quarter mile away in the brush, trees and steep canyons.

"It's spooky terrain for anybody to be in, fighting fire," he said.

The Cougar Creek Fire, about 10 miles south of John Day in the Strawberry Mountain Wilderness, and the larger McGinnis Creek Fire near Kimberly kept ­­firefighters hopping through the weekend.

The McGinnis fire is burning in brush and grass amid the rugged rimrock and canyons about four miles northwest of the John Day Fossil Beds National Monument's visitor center, two miles west of the John Day River and about 12 miles southeast of Spray. Most of the fire is in Wheeler County on private and Bureau of Land Management lands.

At one point, ODF estimated 76 structures were threatened by the fire, but that number had dropped to 20 by Monday.

A temporary flight restriction was set over the fire area.

More than 500 people were assigned to the firefighting effort. The equipment dispatched included four helicopters, which dipped water from the John Day River. As the week began, 15 engines, three bulldozers and two water tenders were working the fire.

The fire team set up an operations center in the Spray school.

Cougar Creek updateMeanwhile, Forest Service crews battling the Cougar Creek Fire set up their camp and operations center at Grant Union High School. Drivers were asked to be careful in that area because of the increased traffic and activity.

The Cougar Creek Fire was first reported about 2 p.m. Saturday by the Flagtail and Dry Soda lookouts and grew to 744 acres by Tuesday.

The Forest Service assigned 355 people to the fire, including smoke jumpers, rappellers and ground crews. A hotshot crew out of La Grande responded.

The Blue Mountain Interagency Incident Management Team, commanded by Rob Batten, was in charge of the operation. In addition to the Forest Service, the Bureau of Land Management, ODF, Grant County and the John Day Fire Department were working the fire.

Officials said firefighters made good progress on fire lines Monday, and the fire was reported to be 15 percent contained.

Although the fire is burning in designated wilderness, crews are able to use equipment including chainsaws and pumps in the effort, as well as helicopters with buckets and airplanes with retardant.

Forest officials also closed some areas and roads near the fire on Monday, July 27, for public and firefighter safety. The closure affected Forest Roads 5401, 6510 and 651, and portions of the wilderness.

Maps showing the closure are available at the MNF Supervisor's office in John Day. Violations of the order are a federal offense and could bring fines or prosecution.

Officials are investigating the cause of both fires.

Kudlow: Just go back to school ... it's not that hard

Why Trump loves to sue people