<I>Photos by Lynn Nicholson For the Blue Mountain Eagle</I><BR>Freshman Jake Batease moves in for the pin during the Grant Union Tournament last weekend. 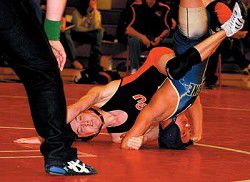 Levi Gagnon, a junior wrestling at 112 pounds, gets control over a gymnastic opponent. He took second in his weight class.

<I>Photos by Lynn Nicholson For the Blue Mountain Eagle</I><BR>Freshman Jake Batease moves in for the pin during the Grant Union Tournament last weekend.

Levi Gagnon, a junior wrestling at 112 pounds, gets control over a gymnastic opponent. He took second in his weight class.

Perennial powerhouse Burns High edged out McLoughlin High, of Milton-Freewater, for the first-place trophy in the Dec. 5 event.

Grant Union Coach Dave Naibert said it was the largest turnout the annual tourney has seen, putting more than 150 wrestlers onto the mats.

Naibert also was pleased with the individual performances of his wrestlers, despite the fact that only six Prospectors competed. He said injuries and eligibility issues kept some of his wrestlers out last weekend, but he expects a bigger turnout in the coming events.

Senior Ethan Kowing made the transition from football to wrestling look seamless, placing first at 215 pounds. He also was voted the outstanding wrestler at the tournament, recognizing his comeback pin in the final match.

Naibert said Kowing had pinned three opponents to get to the final. In that matchup, he faced a top-rated Burns wrestler, who managed to get ahead 8-4 - until Kowing turned him and pinned him in the second round.

Levi Gagnon, a junior, pinned a couple of foes to get to his final bout, also against a Burns wrestler. Gagnon, although he weighed in at 104, was wrestling at the 112 weight and still managed to win by decision and take second place.

Senior Adam Barry, wrestled at 145, and did well for the Pros.

Naibert also lauded freshman Ja­­ke Batease, who made a great showing in his varsity debut, winning three matches out of five.

The Grant Union wrestlers will travel to Nyssa this Friday and Saturday for a tournament that is expected to draw teams from Oregon and Idaho.

Republicans call for investigation into release of wealthy's tax returns