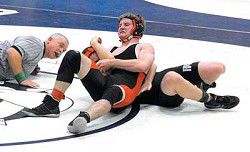 <I>Contributed photo</I><BR>Ethan Kowing gets control over an opponent in the Nyssa Tournament last weekend. Kowing took second place in the tourney. 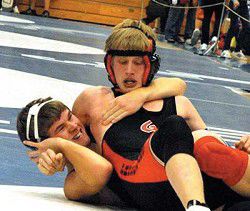 <I>Contributed photo</I><BR>Taner Gilliam finds himself on top of the situation against a struggling opponent in the Dec. 11-12 meet.

<I>Contributed photo</I><BR>Ethan Kowing gets control over an opponent in the Nyssa Tournament last weekend. Kowing took second place in the tourney.

<I>Contributed photo</I><BR>Taner Gilliam finds himself on top of the situation against a struggling opponent in the Dec. 11-12 meet.

The meet featured strong competition from 21 schools - 15 from Idaho and six from Oregon - and some of them showed up with team rosters that had two dozen athletes on them. Nampa, Idaho, took first place in the tourney, with the Parma, Idaho, team claiming second.

Senior Ethan Kowing, wrestling at 215 pounds, won three matches to get to the championship round. He finished in second, losing a close decision to Randy Riley, last year's Idaho state champ from Parma.

Junior Levi Gagnon, wrestling at 103 pounds, finished in third place. His semifinal match was a close decision to Blake Perry of Melba, Idaho. Gagnon won his final match for a 3-1 record.

Freshman Jake Batease, at 285, pinned all of his opponents in the junior varsity competition. His final pin in the championship match came in 1 minute, 25 seconds, over Gabriel Escobar of Caldwell, Idaho.

"As a freshman, in the heavyweight division, he looks really good," said Naibert.

The Prospectors also had Taner Gilliam, Zach Stegman, Alex Kygar and Adam Barry on the mats.

Naibert said the Pros' roster will grow this week, with more wrestlers due to compete at the Baker Tournament. Among the additions: Braden Woodbury, at 140 pounds, and Trevor Brown, weighing in at 171.

Naibert expects Stegman to drop down to 215, after starting the season at heavyweight.

Republicans call for investigation into release of wealthy's tax returns