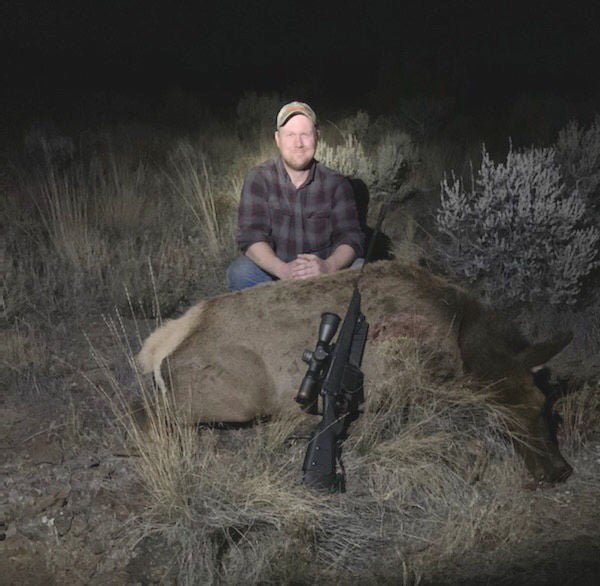 After drawing a perfectly good Murderer’s Creek second-season elk tag, I naturally had more spring to my step this summer. I daydreamed of branch bulls and the thought of hunting up something nice. However, after hunting five straight days in the warm November weather without seeing a single elk on the hoof or hanging in anyone’s camp, I was contemplating breaking out the tag soup recipe book. Having exhausted my vacation, I returned to work empty-handed. Still, there was a glimmer of hope.

Although I’ve just recently perused the 2020 ODFW regulations and realize the damage control tag situation may change, for this year I was able once again to trade in my unpunched elk tag for a private lands damage tag. This time of year, the snow is deep, the daylight fails before 5 o’clock and the elk are especially cautious since they have had to dodge arrows or bullets since August.

Joining me were my two good friends Zach and Baldy, who also had elk tags burning a hole in their pockets. Zach had just recently finished developing a fine new load for his .338 Lapua Magnum rifle. In the initial load workup, he decided to use the grandiose 270-grain Hornady ELDX bullet and a healthy dose of powder. It shot well, and thanks largely to the muzzle break, which looks like something that belongs on a field howitzer, the recoil is quite manageable. Despite having it around for a couple of years, he had yet to have taken any big game with it.

Although I instinctively grabbed my trusty .30-06 for this freezer-filling endeavor, I feared that the wariness of the elk, the position-betraying high winds and wide open country could prove to be more than a match for my capabilities with my favorite firestick. It was mutually decided that the .338 Magnum would accompany us for the extra power and reach afforded by its long-range scope setup. Although I don’t encourage long-range shots of a flippant nature as a rule, a hunter or huntress armed with an accurate rifle of sufficient power and a properly calibrated rifle scope for the game they are engaging can ethically take longer-than-usual shots with confidence on big game.

Baldy, on our first hunt, took a cow elk at just over 600 yards with a single, well-placed shot. There was no wind, lots of time to set up a rock steady rest and take the shot on the distant, oblivious cow elk.

A few days later, I connected on my cow elk with the borrowed .338 Magnum. I chose to tote it along that evening expecting an opportunity like Baldy’s but ended up taking a 325-yard shot near dusk after a long hike through steep, rocky country. Although I could have made the shot with Old Reliable, it was neat to try something new. With my friend’s rifle, it was one and done, and like all of you elk hunters know, that’s when the work began. Only your truest and best friends will help you pack out an elk. It’s good to know I have some I can count on.

Upon further inspection of the synopsis, it looks like the state created quite a few new hunts starting next year. Maybe it’s time to call up a buddy and plan your elk hunt. Maybe they will even help you pack it out! Did you get your winter’s meat this year or will it be tag soup? Write to us at shootingthebreezebme@gmail.com!

Dale Valade is a local country gent with a deep love for handloading, hunting