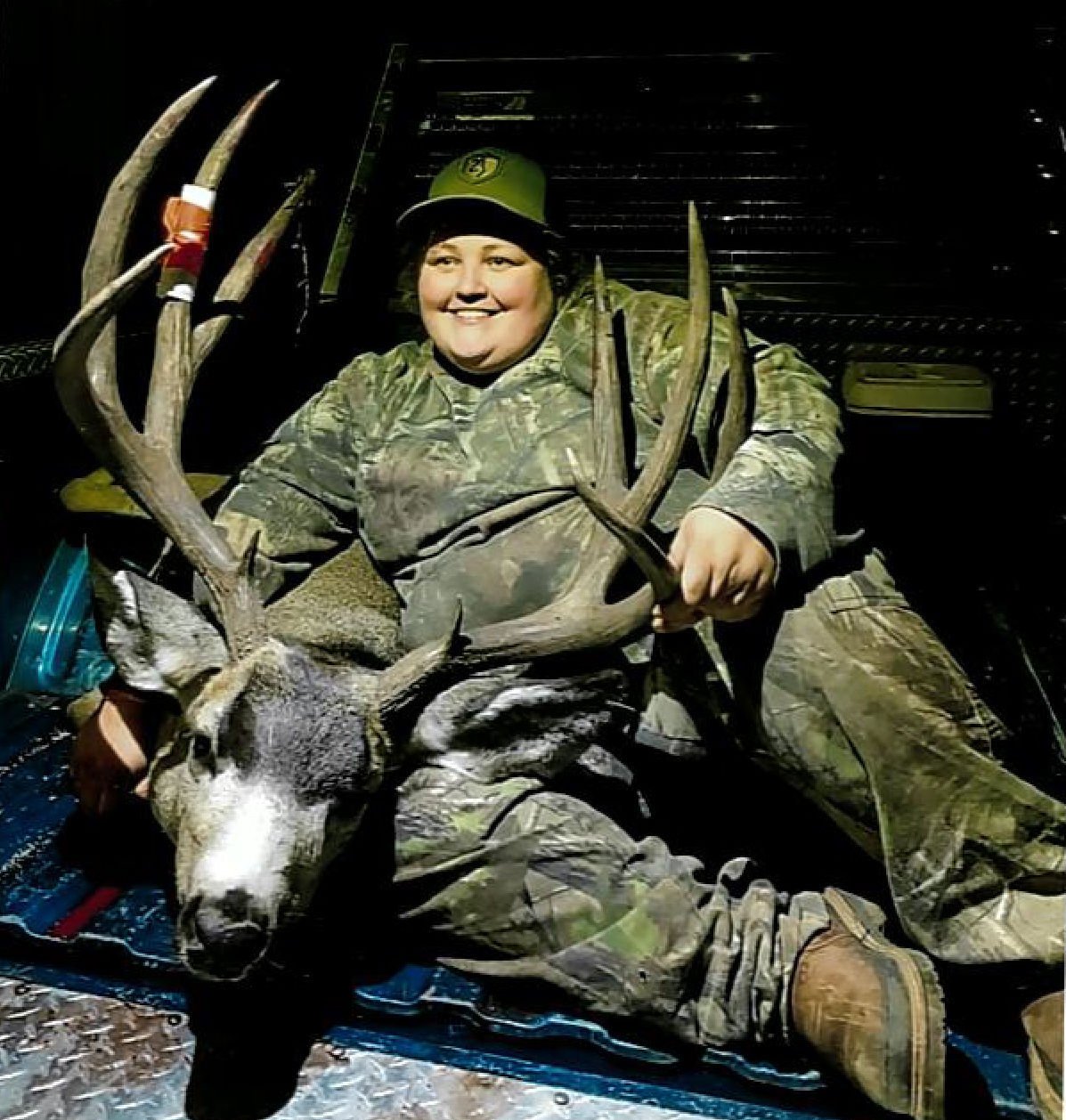 Jolynn Radinovich, longtime Grant County resident, shows off her buck in 2019. Radinovich, both a rifle and bow hunter, said the Oregon Department of Fish and Wildlife should limit the number of nonresident tags before restricting resident bow hunters’ tags. 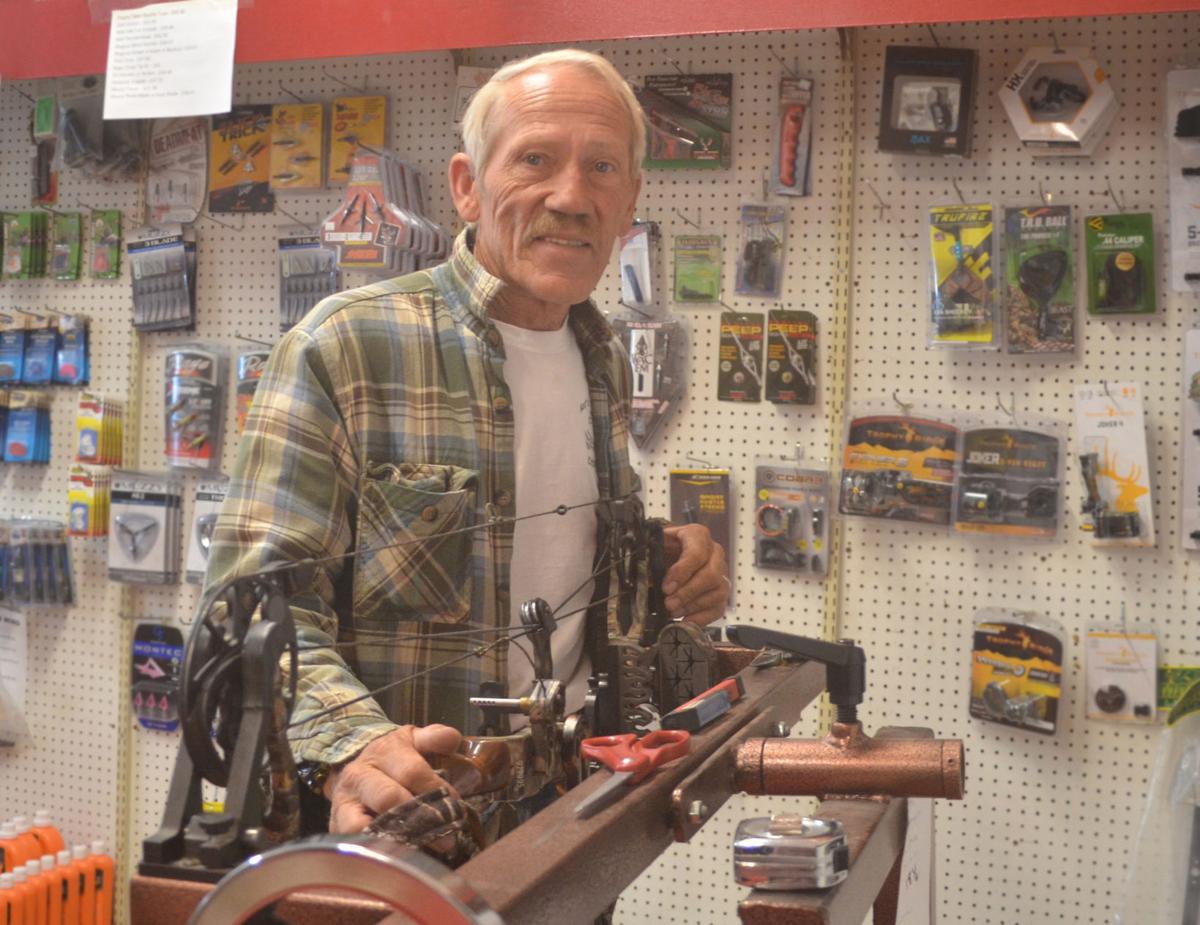 Andy Day, longtime Grant County resident and bow hunter, shows off a bow at his shop, Andy’s Plumbing and Sports. Day said he is a proponent of a proposal that would require hunters to draw archery tags but that nonresidents should only be allotted 5% of the tags.

Jolynn Radinovich, longtime Grant County resident, shows off her buck in 2019. Radinovich, both a rifle and bow hunter, said the Oregon Department of Fish and Wildlife should limit the number of nonresident tags before restricting resident bow hunters’ tags.

Andy Day, longtime Grant County resident and bow hunter, shows off a bow at his shop, Andy’s Plumbing and Sports. Day said he is a proponent of a proposal that would require hunters to draw archery tags but that nonresidents should only be allotted 5% of the tags.

As the deer population in Eastern Oregon has dwindled by roughly 50% in the past 40 years, the Oregon Department of Fish and Wildlife’s Eastern District is proposing requiring archery hunters to draw for tags like rifle hunters.

The Oregon Fish and Wildlife Commission is expected to vote on the proposal to make the change for deer Sept. 11. The commission was going to vote on making the change for elk this year as well but decided to wait until next year to consider it.

John Day ODFW Biologist Ryan Torland said archery season has had an unlimited tag structure where hunters who did not draw a rifle tag could purchase a tag, but rifle tag numbers have been cut over time. Torland said ODFW has also restricted tags for the Landowner Preference Program, where ODFW issues landowners and their family members hunting tags based on the acreage of their property.

“Archery hunters were the last group that had not been restricted,” he said. “We cut tags everywhere else. They’re continuing to get the opportunity to hunt, and the others are not, and it’s kind of an equitability thing and the declining populations.”

Torland said the hunting season structure is 40 years old, and back then deer and elk populations were doing well with minimal hunter participation.

Torland said ODFW is concerned with the decreasing deer population, but elk, on the other hand, are facing a complicated situation.

“Archers are taking more of the pie,” he said. “We only have so many bulls out there that you can shoot. They’re getting a bigger and bigger piece of the pie, and there’s no restriction put on them.”

Torland said elk have migrated onto private land due to the pressure. He said this is causing landowners damage to their property and keeps hunters from harvesting them on public land.

Torland said the data is mostly anecdotal and comes from the impression they get, but also on hunter success rates.

“During the rifle seasons later in the year, some of that hunt success has gone down dramatically,” he said.

He said the behavior is consistent with elk social behavior.

“They have very good learned behaviors,” he said. “They start getting pressured on the forest, and they figure out through time that Joe Blow Landowner’s place down below in the valley is somewhere where they won’t be chased and shot at.”

Torland said ODFW is basing the policy proposal in part on a hunter survey where roughly 70-75% of hunters preferred to hunt by rifle, compared with 20-25% percent who preferred to hunt with a bow. He said a small percentage chose a muzzleloader to make up the difference.

“This is where more of the equitability comes from,” he said.

Andy Day, a longtime bow hunter who owns Andy’s Plumbing and Sports, said he agrees with the proposal but would like to see limits put on nonresidents instead of locals.

“If we did it like most all other states, limit the number of nonresidents (who receive tags) to the 5% created by the legislature,” he said, suggesting only 5% of tags be allotted to people who do not live in Oregon. “I’m not trying to be biased or racist or anything, but we call this little California because of how many people show up in this community during hunting season.”

Day said he is also concerned about losing his preference points, points accrued when a hunter does not draw a tag that increase the likelihood of drawing a tag in the future. He said some hunters will save points for decades to put in for a tag in a specific unit for a trophy animal. Currently, hunters who do not draw a rifle tag can collect their point and then purchase an archery tag.

Torland said that is one of the drawbacks of the proposal, but he said there may be possibilities for people to put in for a second-choice hunt that could allow the accrual of points.

“We’re not sure how that will shake out, so I can understand their concern,” he said.

However, Torland said rifle hunters have been dealing with this dilemma for 40 years.

“Archery hunters are getting in the same boat as rifle hunters,” he said. “This is not something that’s unique.”

Jolynne Radinovich, a local rifle and bow hunter, said the proposal could harm local families who rely on hunting.

“For a lot of people around here, hunting is how we feed our families,” she said. “Hunting is also what brings these families together.”

"We call this little California because of how many people show up in this community during hunting season."

"Archery hunters are getting in the same boat as rifle hunters. This is not something that's unique."

Hunters can submit comments to the Oregon Fish and Wildlife Commission at odfw.commission@state.or.us.

More information is available at myodfw.com/articles/big-game-review.

This story begins like every summer as we hunters patiently await the draw results to come out on June 20. I was hoping to be one of the lucky…