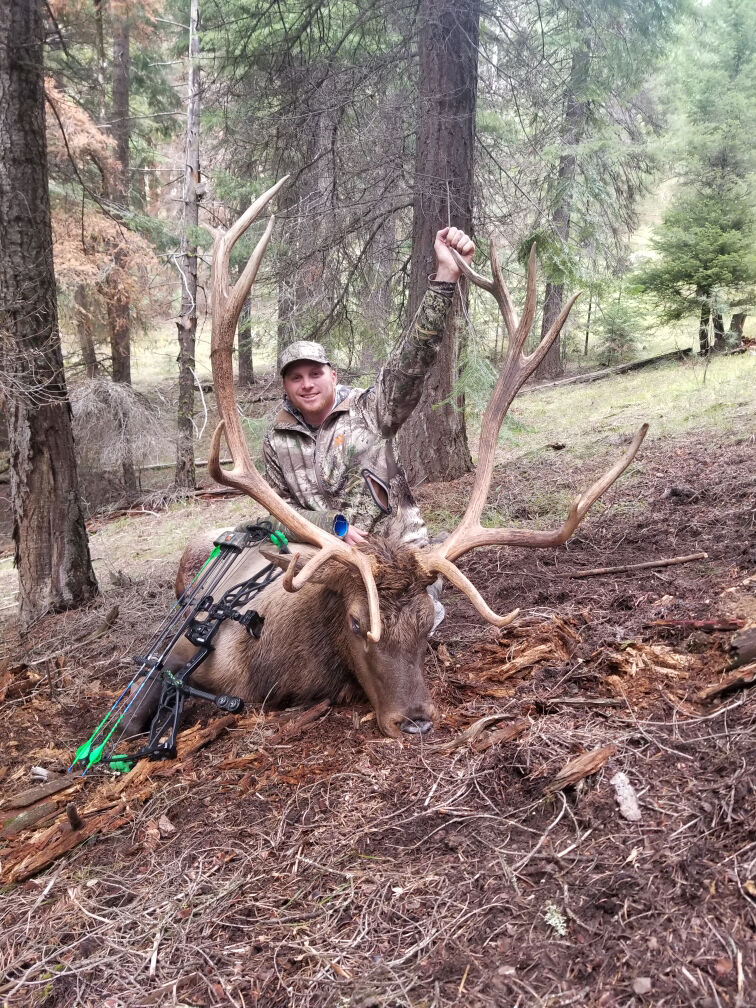 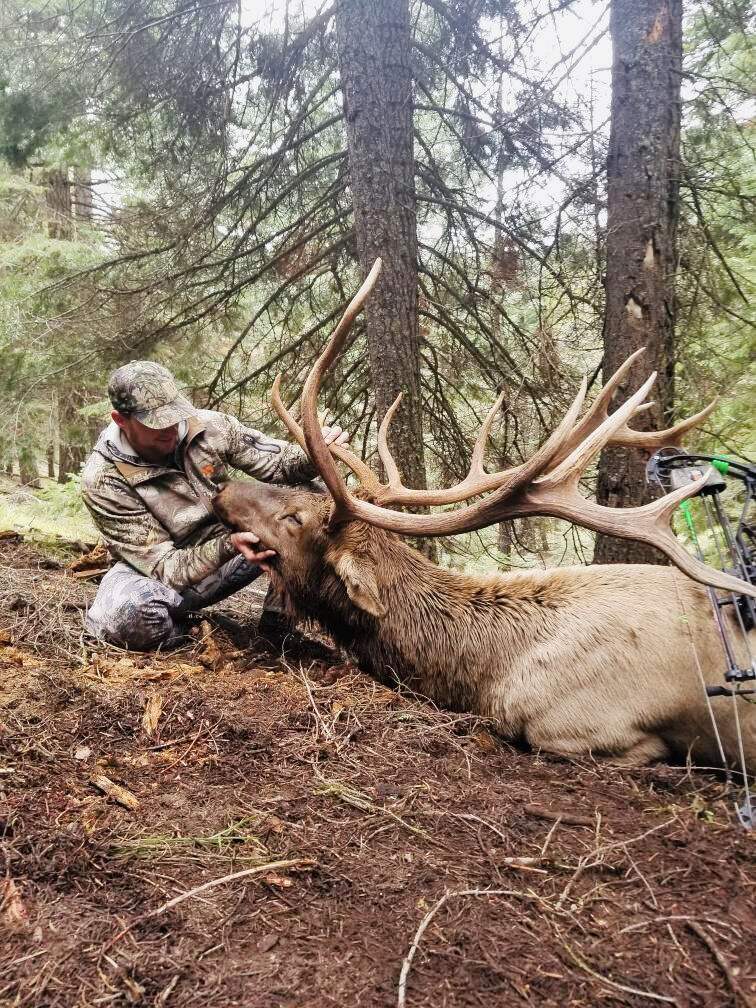 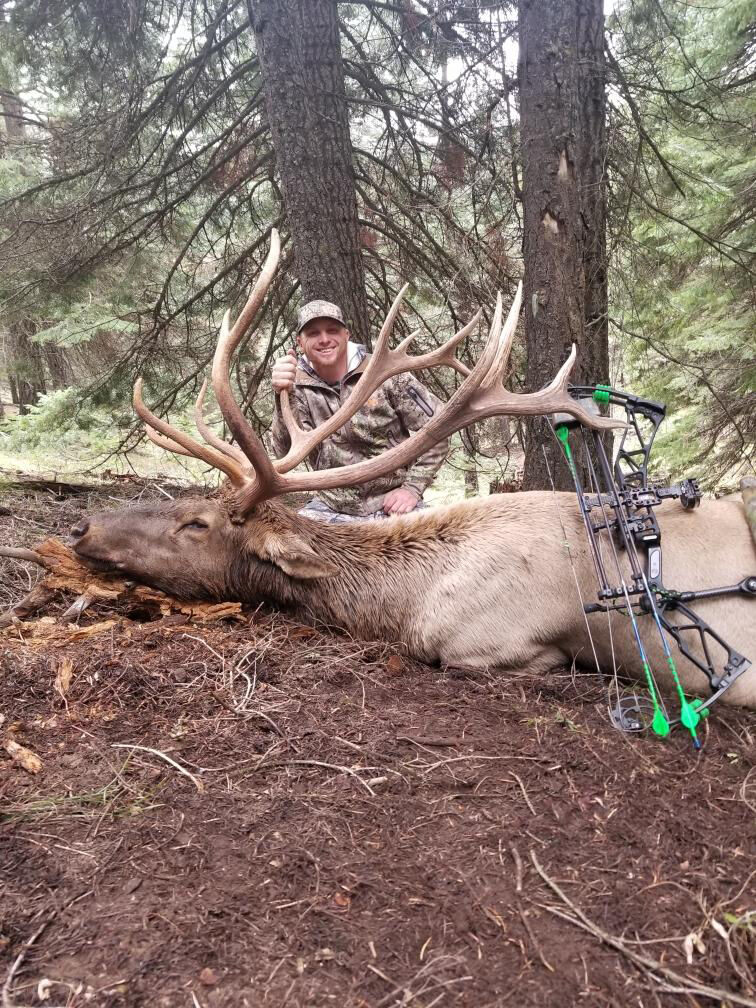 This story begins like every summer as we hunters patiently await the draw results to come out on June 20. I was hoping to be one of the lucky ones to draw a coveted archery elk tag for one of the big three trophy units here in Oregon so I could pursue a bull of a lifetime, and like every year, I read the words unsuccessful on my report.

That didn’t stop me from being excited to get out there and on an over-the-counter public land tag to enjoy what I like doing the most. I live all year for every September to get another chance to chase rut-crazed bugling bull elk! And after thousands of practice arrows shot throughout the summer, I was ready and September was here!

So on the morning of Sept. 18, 2019, I found myself hunting alone. I always second guess myself when I hunt alone. So I pull up to the closed road where I last heard the giants growl, I grab my bow and head out the ridge. I get in a good place where I could let out a location bugle, a place where it will travel down the drainage but yet echo off the ridges up drainage.

It’s cold and damp, not a lot of noise happening, so I rip off a loud, long locator using my Phelps Game Calls Blackout series No. 1 diaphragm anticipating a response. I waited and waited but nothing, so I crank off another one. Still nothing. Filled with frustration I screamed demanding him to answer but received nothing in return.

So I then decide maybe he climbed out of the drainage into the next. Back to the truck disappointed, I went into the next drainage. With no reply there either, I told myself he had to be there, so back to the closed road with low spirits and no expectations.

I pulled up to the ridge and started back out it. It’s still cold and damp and pretty quiet as I walk alone down the road. I hear something and immediately stop to listen. It’s a low, earth-rumbling growl of the old warrior I was yearning to do battle with. There he was. I couldn’t see him, but no hesitation, I knew that voice!

With a quick check of the morning thermals, I was afraid I wouldn’t have a play on the old smart king, but with a lot of luck the stormy weather had brought in a wind that happened to be in my favor. So down the draw I went, only gaining distance when the beast would growl. Closer and closer. Louder and louder.

I knew I was in great position. It was like he was searching for me, the bull that just an hour before demanded his attention. But now he can’t find his opponent, and he was frustrated that things didn’t go as he had planned.

With cows in sight, I was held in my position, not seeing the bull. I searched with my eyes, trying to get a bead on the bull. When all of a sudden from up the drainage a horrible-sounding attempt of a bugle rang out. It hit a switch, and as quick as I found him, the bull sent out a roundup bugle and the herd started to move farther out the ridge about midway up the side.

Trying to slow the pace, I screamed at the giant as I dogged his every movement, but with all the commotion it only drew more attention from what I figured was more hunters. The bull would only answer to my bugles as we put distance between us and the others. Finally as we approached the end of the ridge, I gained a lot of distance cutting through a dark, cool, quiet saddle that smelt like the musty stank of a rutting bull. I thought to myself I’ve got him now, but the tricky monster held quiet.

I knew he had to be right there below me as I listened for any sound from the warrior. I had a suspicious feeling that he was trying to give the slip and was circling the point of the ridge heading back to his bedroom I just came through, so I snuck back and got into position.

The lead cow entered the bedding area. She searched the area, making sure they were safe. She came through followed by several more. All but one had moved to the far side of the area.Then here he came up at 62 yards. Without a shot, I stayed patient (something my dad never accused me of doing). I watched the bull bed.

At about 8:02 a.m., without having a shot, I decided to try my luck at getting a little closer. Two hours and 40 minutes later, I had gained a mere 7 yards. I never knew my hip could cramp from trying to sneak.

I tried videotaping him in his bed, which revealed my uncontrollable shaking of excitement. Then the only cow near me decided she needed to move. She stood up and started toward the others, and I realized my opportunity was coming fast.

I ranged the opening again: 55 yards. The giant rose up out of his bed. I hooked up my Alpha release by B3 Archery, and he took the three steps I needed to draw my bow, and he stepped into the opening. I remember I was going to hit him with a nervous grunt to stop him perfectly, something I learned from ElkNut, but the bull stopped on his own to look around as I tried settling my pin working through my shaking.

Confidently, I sent the Element Archery Storm series arrow on a majestic flight. What took a fraction of time seemed like forever to reach the bull. On impact, the bull whirled and crashed off the mountain. I was immersed with excitement and nervousness. I doubted the placement of the shot, so I immediately backed out, not wanting to risk losing the incredible king of the mountain I was so patient to get a shot at.

I discussed the placement with some buddies and hunting partners. We all agreed the bull should be dead. It had been five hours when we took up the blood trail, which wasn’t very hard to follow, because the bull’s equilibrium was starting to fail from the blood loss. His legs were really digging into the soft hillside as he stumbled off the steep slope. After about a 100 yards, the bull decided to slow his pace.

His tracks were now barley visible so I picked my head up to check my surroundings. I spotted the bright blonde body tucked up next to some dark old growth trees, and with a shout, I sprinted to my bull of a lifetime and turned to see the approval from my older brother and uncle. We all were incredibly impressed by the majestic giant!

Many try, but few succeed in getting a tag to hunt for bighorn sheep.