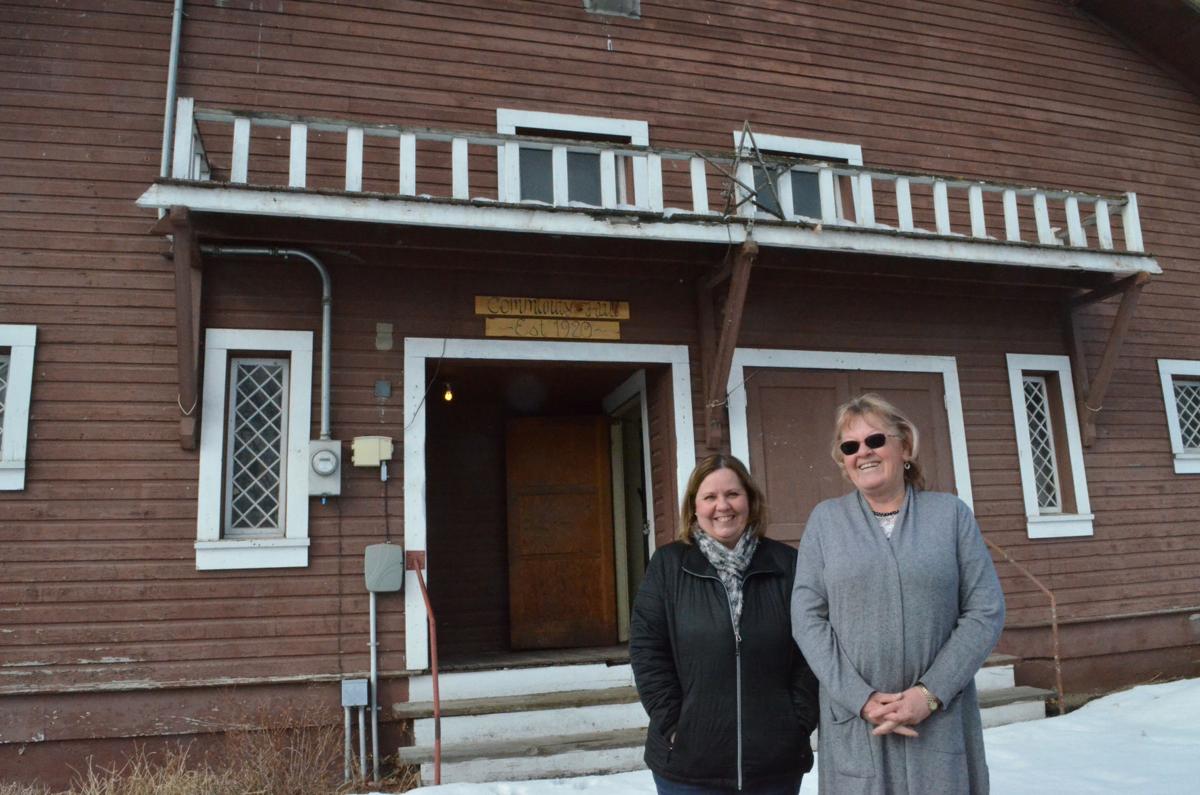 City Recorder Ruthie Moore and Mayor Ilah Bennett stand in front of the Dayville Community Hall in April. The city leaders had recently received news that Dayville had been awarded a Community Development Block Grant. 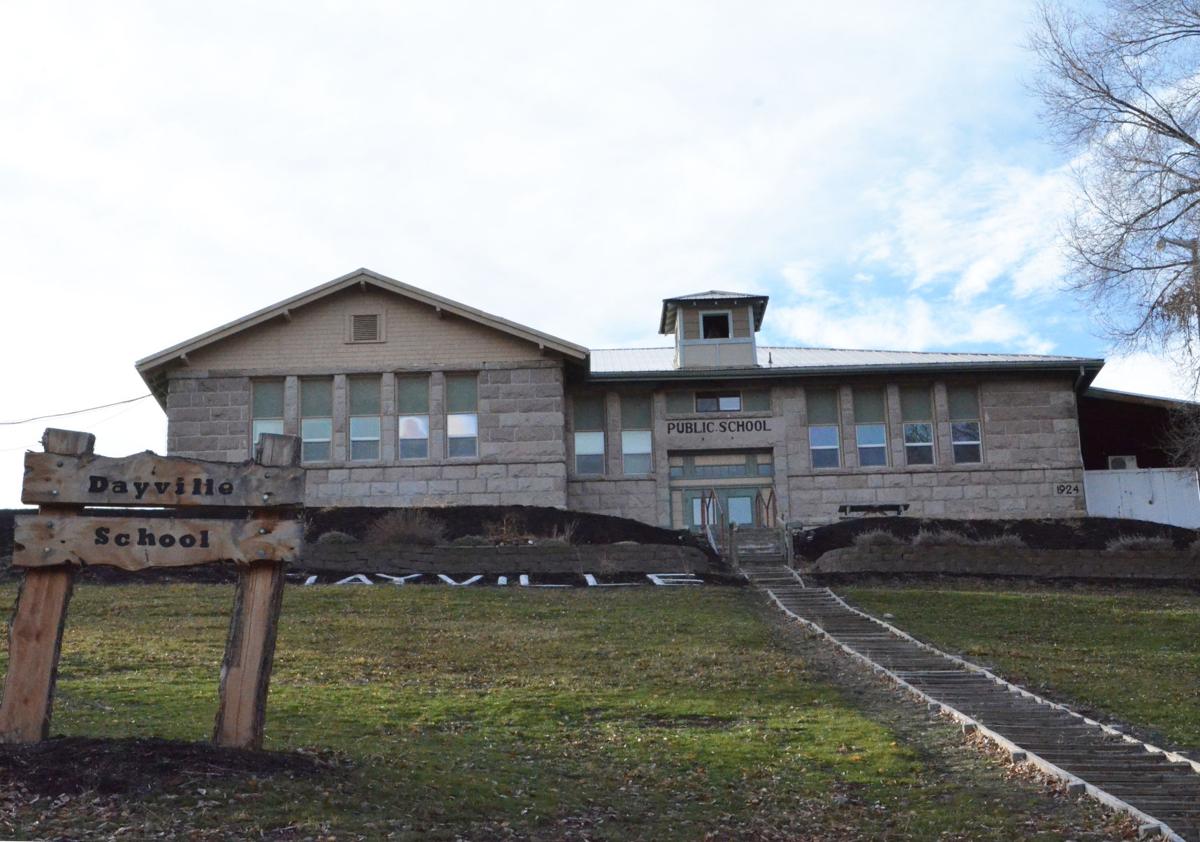 The main building at Dayville School was built in 1924 and is used for the high school, administration office and the cafeteria. 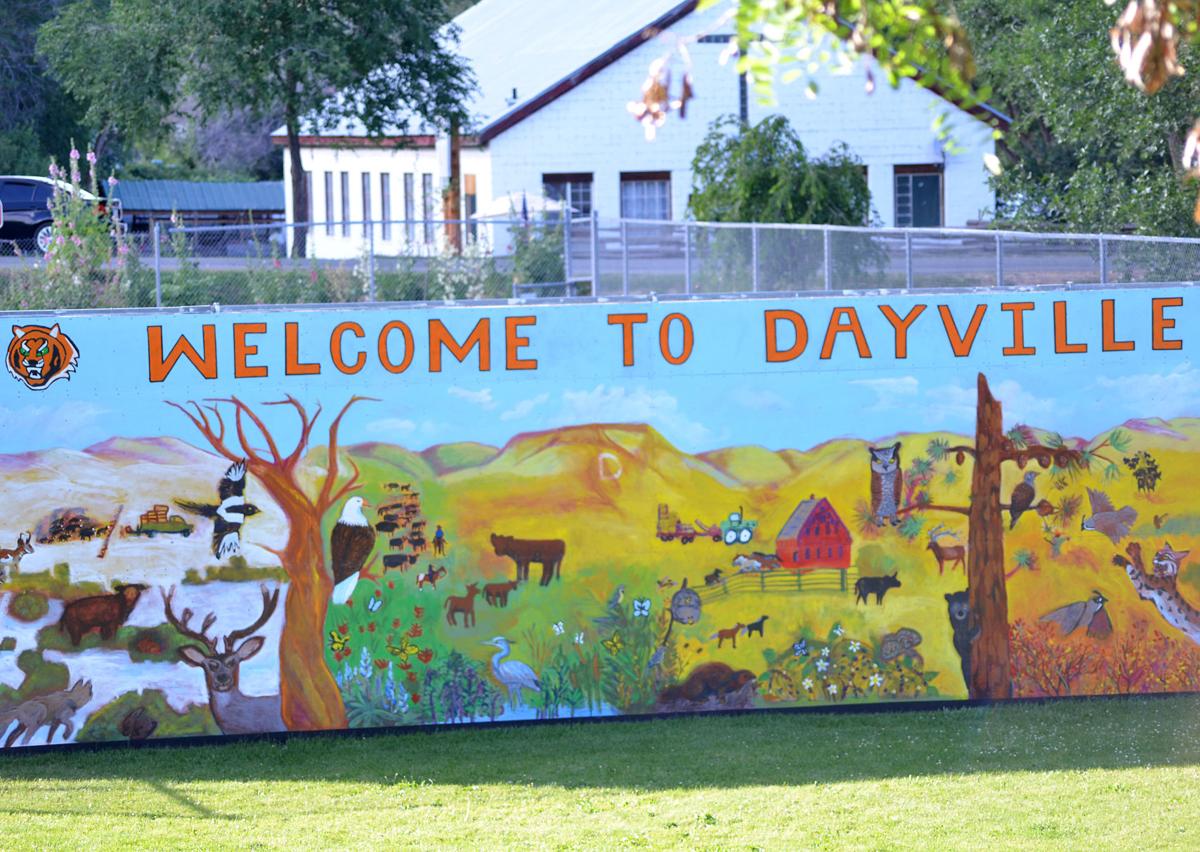 A colorful sign in the city park welcomes visitors to Dayville. 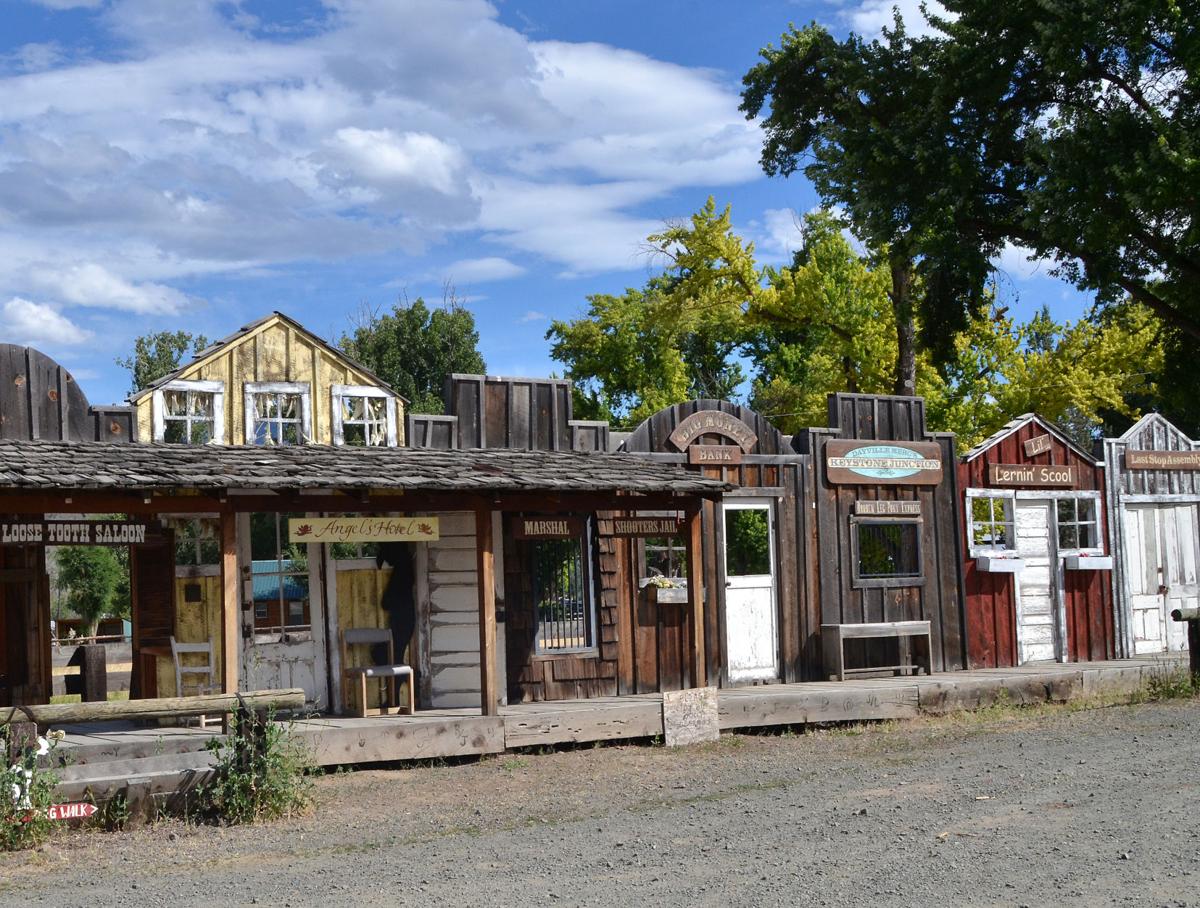 A false front adjacent to the Dayville Merc makes for an interesting stop in the town. 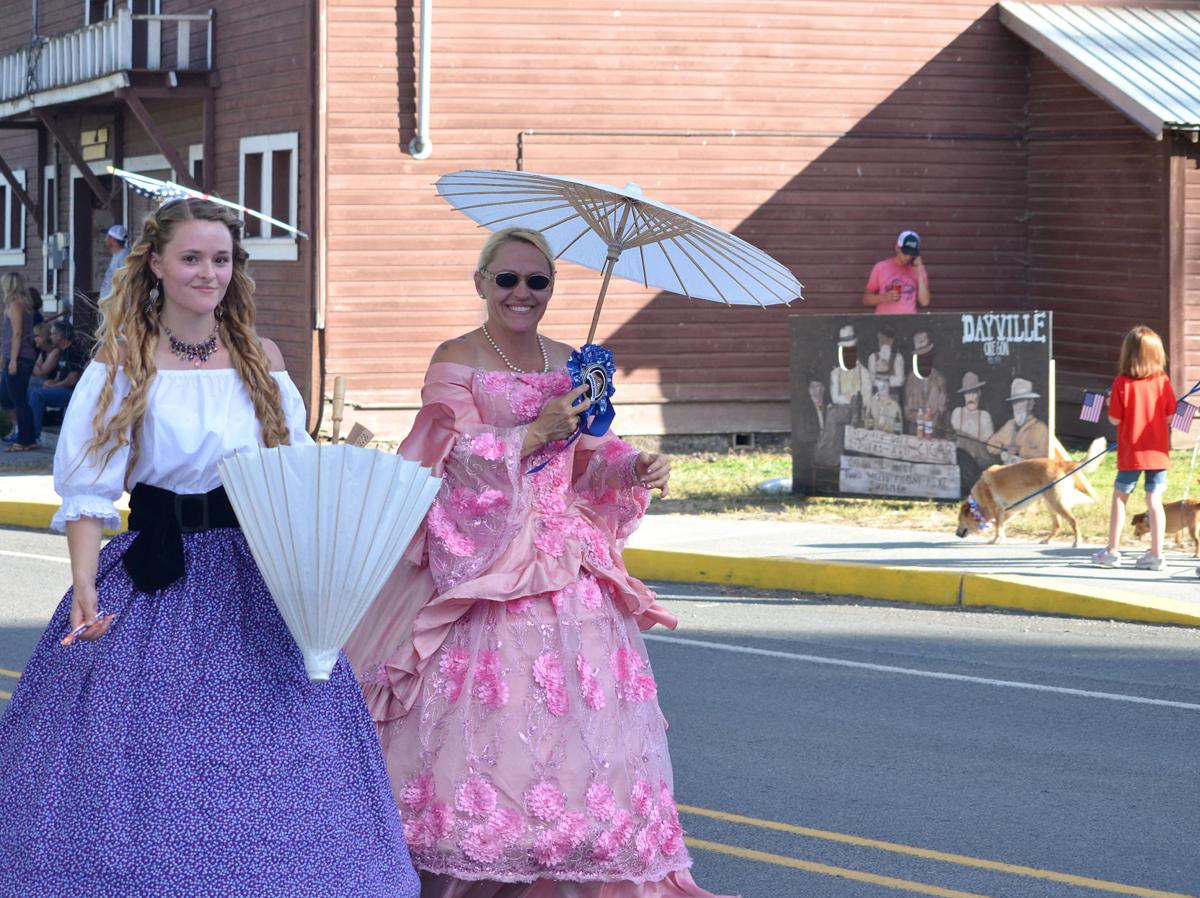 Destiny Brown and her mother, Heidi Brown, represent the Dayville Merc as part of a walking group in the 2016 Fourth of July Parade, the Dayville Community Hall in the background. 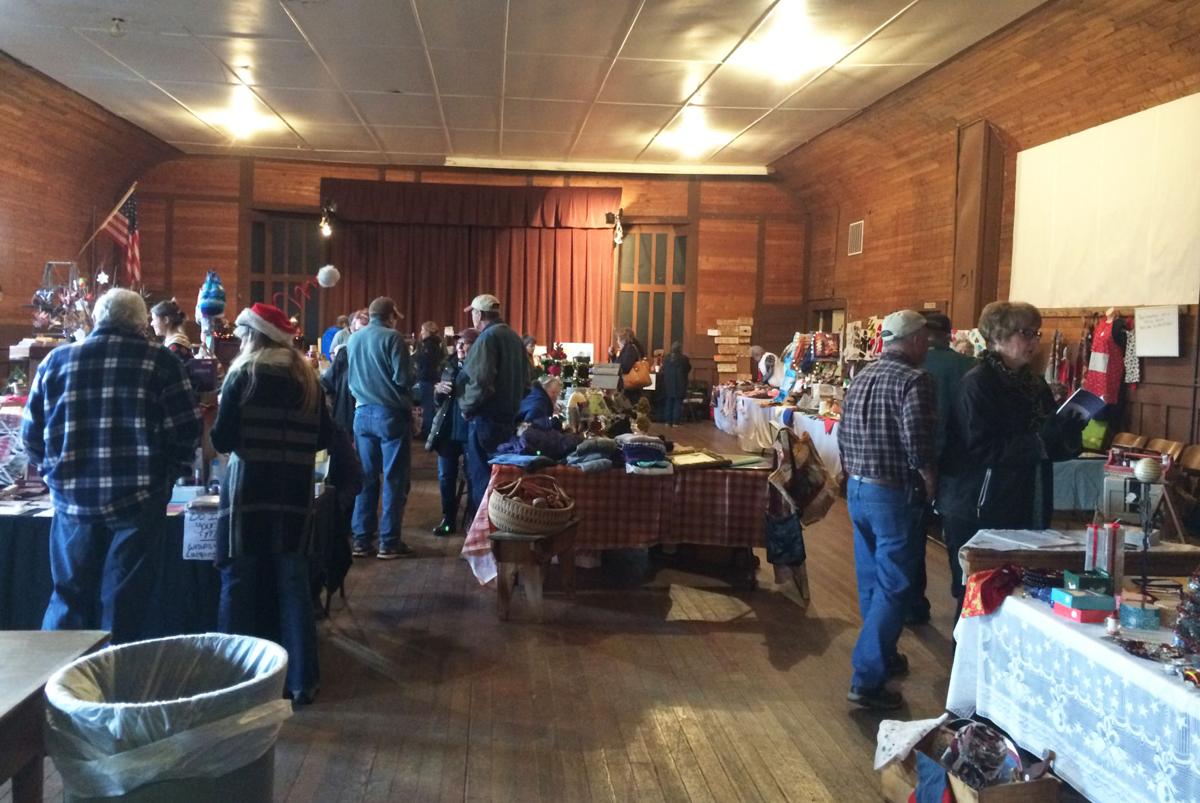 Dayville residents and visitors gather in the Dayville Community Hall in December 2018 for the annual Shop Til You Drop Winter Festival. 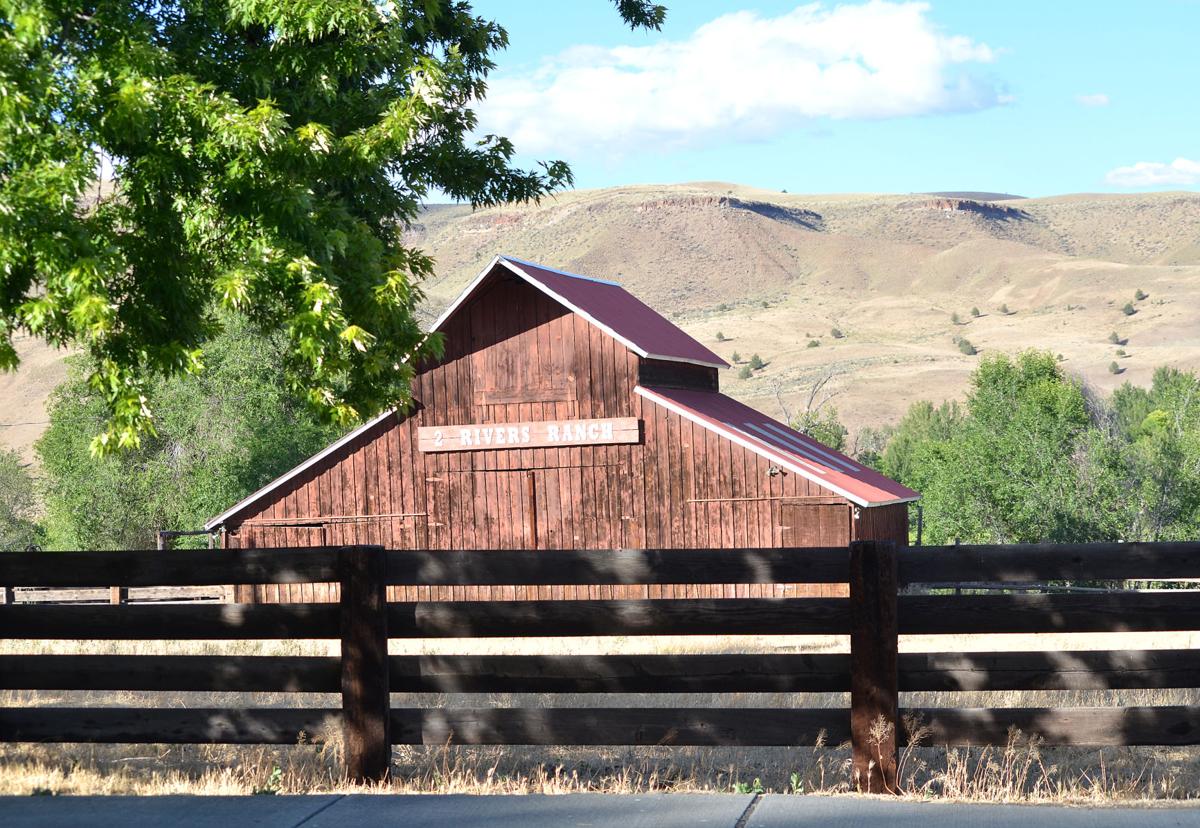 Scenery in Dayville, as seen from the main street, includes this 2 Rivers Ranch barn. 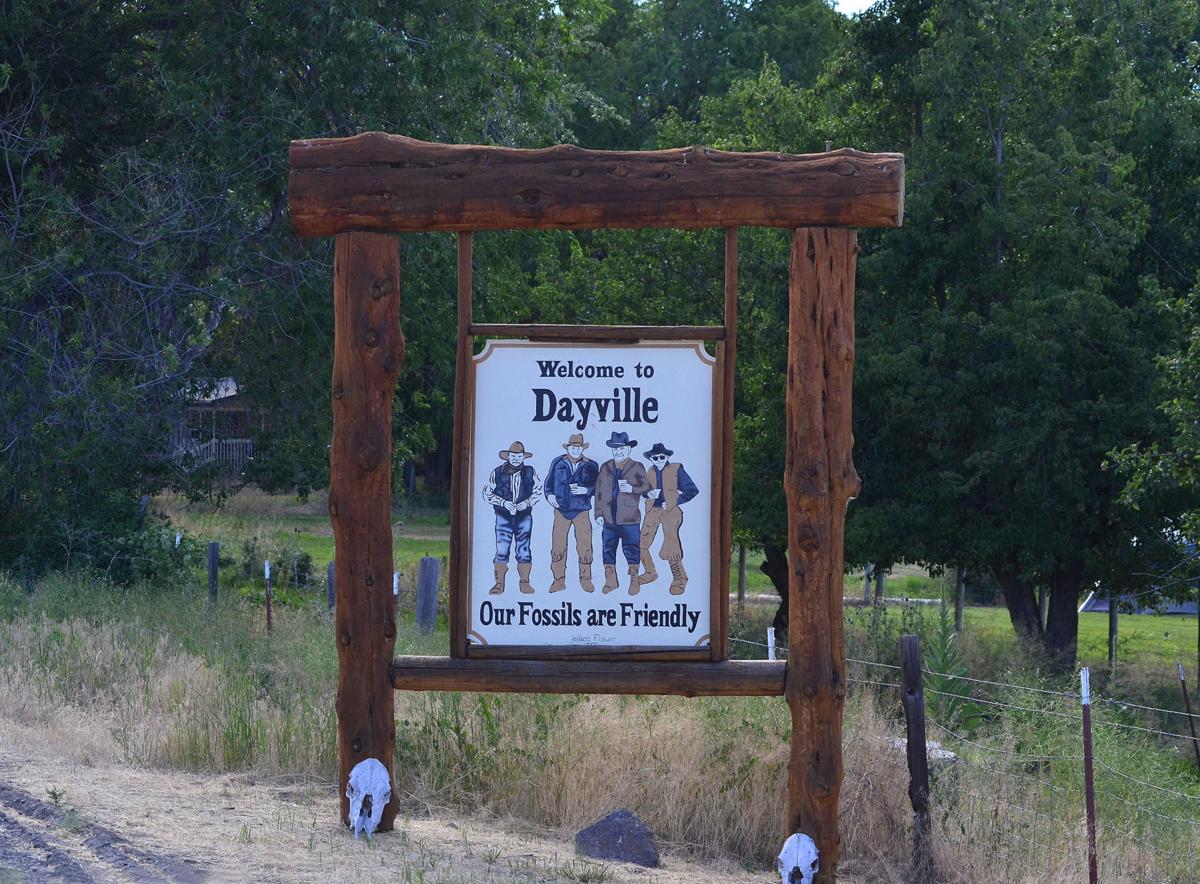 A sign on the east side of Dayville welcoming visitors reads 'Welcome to Dayville, Our Fossils are Friendly.' 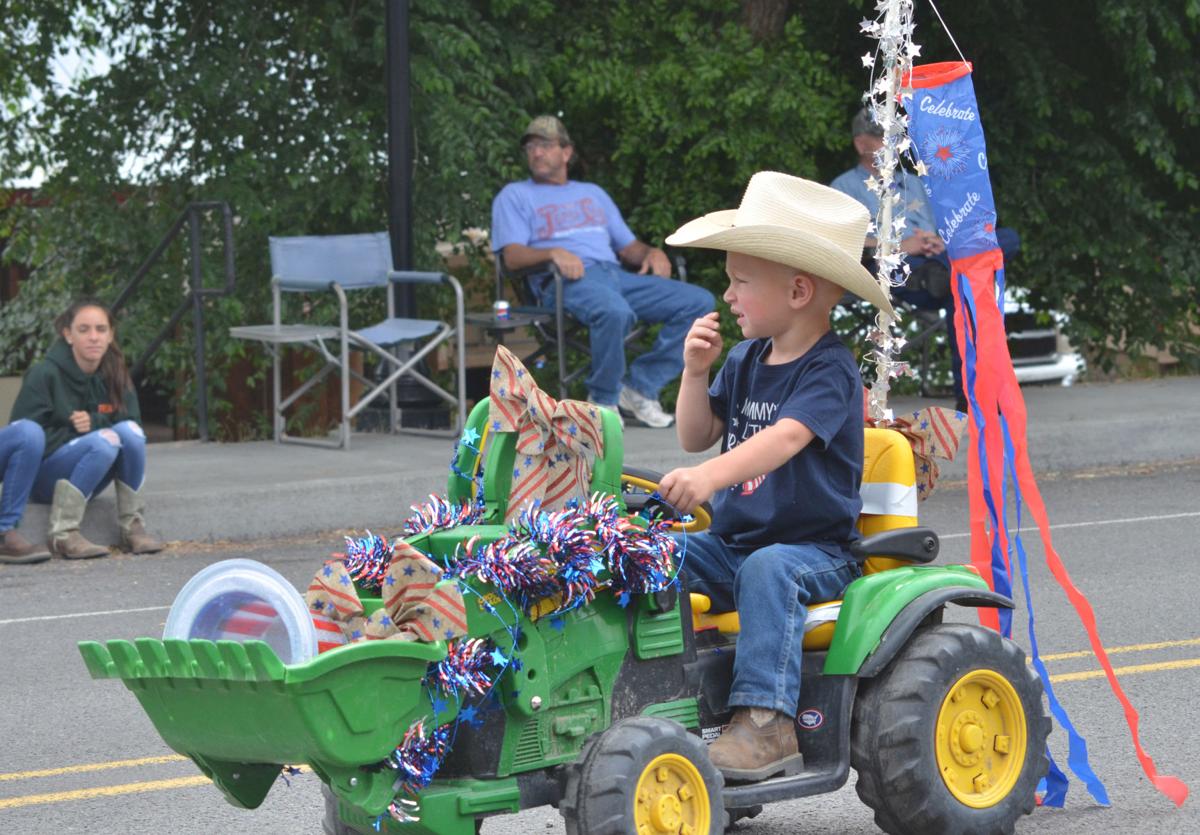 Jake Fisher, 4, drives a mini-tractor in the 2018 Fourth of July Parade in Dayville. 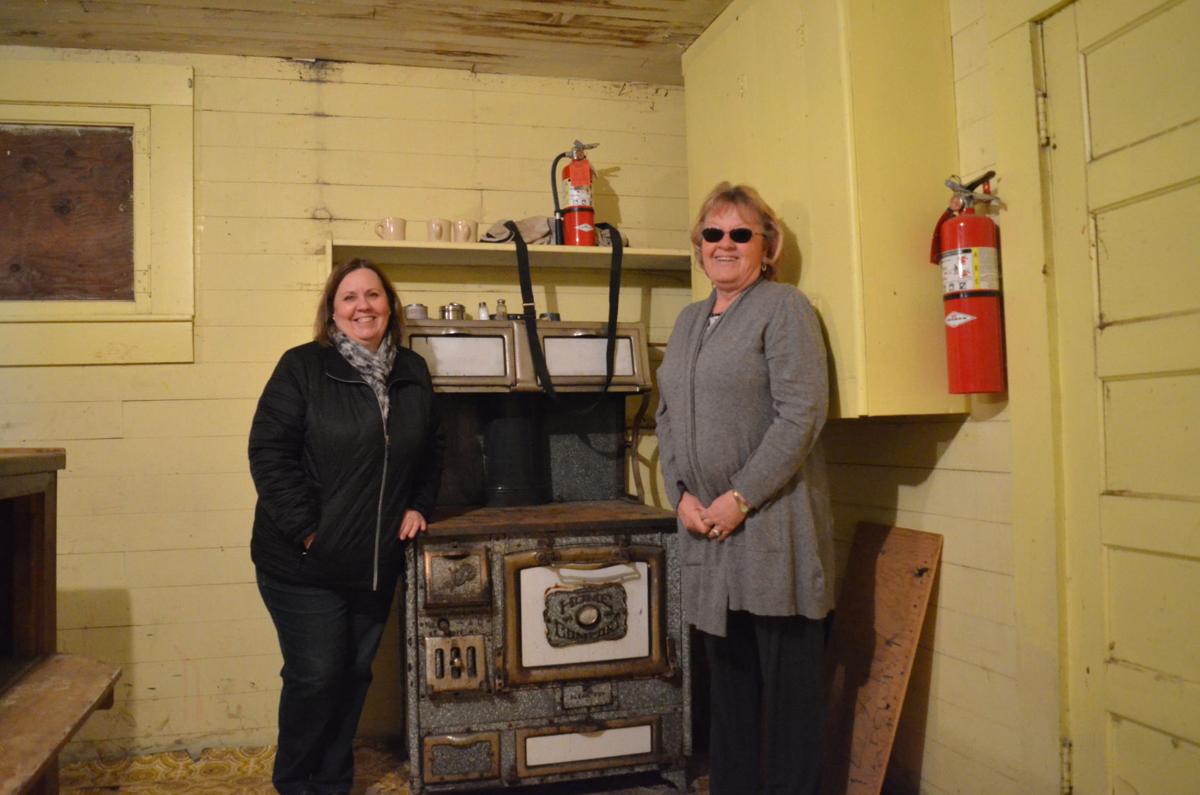 City Recorder Ruthie Moore and Mayor Ilah Bennett stand in front of the Dayville Community Hall in April. The city leaders had recently received news that Dayville had been awarded a Community Development Block Grant.

Destiny Brown and her mother, Heidi Brown, represent the Dayville Merc as part of a walking group in the 2016 Fourth of July Parade, the Dayville Community Hall in the background.

Scenery in Dayville, as seen from the main street, includes this 2 Rivers Ranch barn.

Mayor Ilah Bennett and City Recorder Ruthie Moore work together with five city council members to get the job done in Dayville.

Two areas of focus for the Dayville city leaders are beautification and promotion of the town, said Moore.

“We have a very dedicated group of council members and mayor,” she said. “They’re just great. We have some young people now, which is very nice to have them stepping up as well to make our community a better place to be.”

Bennett said they applied for a Community Development Block Grant for the community hall with little hope of being awarded the funding.

“We weren’t really expecting to get the grant,” Bennett said. “Even the guys helping Ruthie said they didn’t know if we had enough points. They said go ahead and put it in, because not very many people applied.”

Moore said they applied, hoping to learn the ropes and see how they could improve the process if they didn’t receive the grant.

She sent out a city newsletter the morning of Feb. 28 this year letting residents know they would probably hear about whether they received the funding by April 1.

Moore received the good news later that same day via an email on her phone that the city was awarded a $1.45 million grant.

She was in the midst of a cheering crowd in Pendleton when she received the news, attending her granddaughter Alcie’s state basketball tournament as a member of the Grant Union Prospector team, coached by Ruthie’s daughter Kristi.

Moore said the community hall is at the top of residents’ list for exciting progress in Dayville.

The renovation project is something the community has been working toward for two decades, holding multiple fundraisers each year for the cause, including a spring and fall potluck with games, auctions and drawings for prizes.

The grant funds will provide full funding for the facelift the hall has been needing for years.

“The old hall has been deteriorating rapidly and has needed renovation,” Moore said.

“It needs a lot of TLC,” Bennett said.

Bennett said one of the main issues has been the lack of heat, making it impossible to use the building year-round.

A new heating, cooling and ventilation system will be installed to fix that problem.

The main building and the stage are considered to be in relatively good shape, but the balcony and stairs will need structural repairs. Interior wall and floor finishes are in good shape and will be preserved.

Major improvements to the hall will include removing the existing roof sheathing and installing pre-manufactured trusses and new roofing. The exterior siding also will be removed, allowing electrical work and insulating before new sheathing and siding is installed.

On the advice of the preservation office, the new addition will be designed to look differently than the rest of the building. Plaques describing the original hall will be hung, and the lobby area will house historical artifacts such as the antique wood cookstove and movie projector.

One “quirk” Moore discovered is that if they had waited to apply for the grant, they would not have qualified for the low- to moderate-income level that is required.

“Everything fell into place so well,” she said.

Dayville Superintendent/Principal Kathryn Hedrick, who came to the school district in 2015, said the $1.4 million the school is receiving for upgrades is, in a way, dovetailing with the $1.45 million the city has received for the community hall.

“It’s an uptick in the town pride and dedication,” she said. “Our community members have shown us great support.”

Residents of Dayville passed a $700,000 bond in May, and a $700,000 match from the Oregon School Capital Improvement Program brings the total to $1.4 million for the improvements.

“This is a 1924 building — and without a new roof,” Hedrick said. “The new roof is pretty important.”

Sidewalks will be added to link the high school to the gym and elementary school, and new ramps with gentler slopes will provide easier access to the high school.

Parking will be updated, and though it won’t be paved, it will be regraded. ADA-approved parking spots will also be added.

Another main project included in the plan is an overhaul of the electrical wiring in the elementary school, which was built in the 1950s.

Hedrick said she appreciates the work of the bond advisory committee, spearheaded by Brandon Thompson.

She’s pleased with the renovation plans and said, “The work of the bond is just the beginning.”

The school received a technical assistance grant for a seismic study, this time with no match required. Once trouble spots are assessed, the school may receive a grant for those repairs.

“That’s why the gym isn’t getting a whole lot of attention right now,” Hedrick said.

She said the projects they’re working on will increase the safety, security and access of the school.

“The community definitely invested in its kids and the buildings,” she said. “The process will take a while, but the community should know we’re jumping on that and doing all we can to make the repairs as fast as possible.”

“If you blink you might miss it” is an adage that could be applied to many rural towns in the west.

Dayville, with a population of 155, is beautiful and welcoming, but could be missed by visitors traveling from the west who may divert to the John Day Fossil Beds National Monument before they realize the town’s existence.

Moore said the city is working with the Oregon Department of Transportation to place a business sign on Highway 26 a couple miles before the Highway 19 junction, which leads to the Fossil Beds, in hopes of attracting more visitors.

“It will list what services are available — a gas pump, a fork and spoon, a tent for camping, all the symbols that will specify what services we have,” Moore said, adding they hope to have it installed by next spring.

Though no new establishments have cropped up, Dayville’s current businesses are holding steady, including a cafe, a mercantile, a mini-mart with a gas station, an inn with an RV park and another RV park and a retail shop with art, espresso, ice cream and deli sandwiches.

Dayville residents love a chance to celebrate and gather.

The town goes big for the holidays, including decorating the downtown with scarecrows in the fall, holding a bazaar in winter and decking out adopted Christmas trees that line Franklin Street. A Bunny Hop 5K with an Easter egg hunt is a fun spring activity. Their Fourth of July festivities bring the biggest celebrations, with a parade, food, games and a classic car show.

A $100,000 Small Cities Allotment through the state will pay for paving Owens Street in Dayville.

That street, which runs between Schoolhouse Road near the fire department and Highway 26 near Dayville Cafe, was torn up when sewer system work was done in 2001, then chip sealed.

Moore said, at that time, there weren’t enough funds to completely resurface the road.

When asked what challenges the city faces, Moore said they had to increase the sewer rate last year.

“Our sewer fund wasn’t as healthy as we wanted it to be, so by increasing the sewer rate it looks a lot better,” she said. “When you only have 105 connections, you have to keep a close eye on your balances and increases, unfortunately.”

One resident said political differences are set aside when called to action to help the town or a family.

High school students were out in force to help sandbag when the city was affected by spring flooding this year, and townspeople rally around those who may experience other disasters.

“I can remember when a place burned down just outside of town,” Bennett said. “They were completely outfitted by the next day or the day after Christmas.”

She said within 24 hours the family had a new home to live in, furniture, new clothing, food and a stack of wood for heat.

More recently, the community came together when the late Cheryl Hubbird was diagnosed with cancer last year.

A benefit dinner and auction raised $16,000 for Hubbird’s expenses.

“I got to eat a cheesecake bought by a friend for $250,” Bennett said.

She said some people may shy away from living in Dayville, if they enjoy shopping at big box stores.

“In Grant County, most people live here because this is the way we want to live,” Bennett said. “Those of us who stay here don’t mind the remoteness.”