The People Mover provided transportation to visitors during the eclipse in 2017. 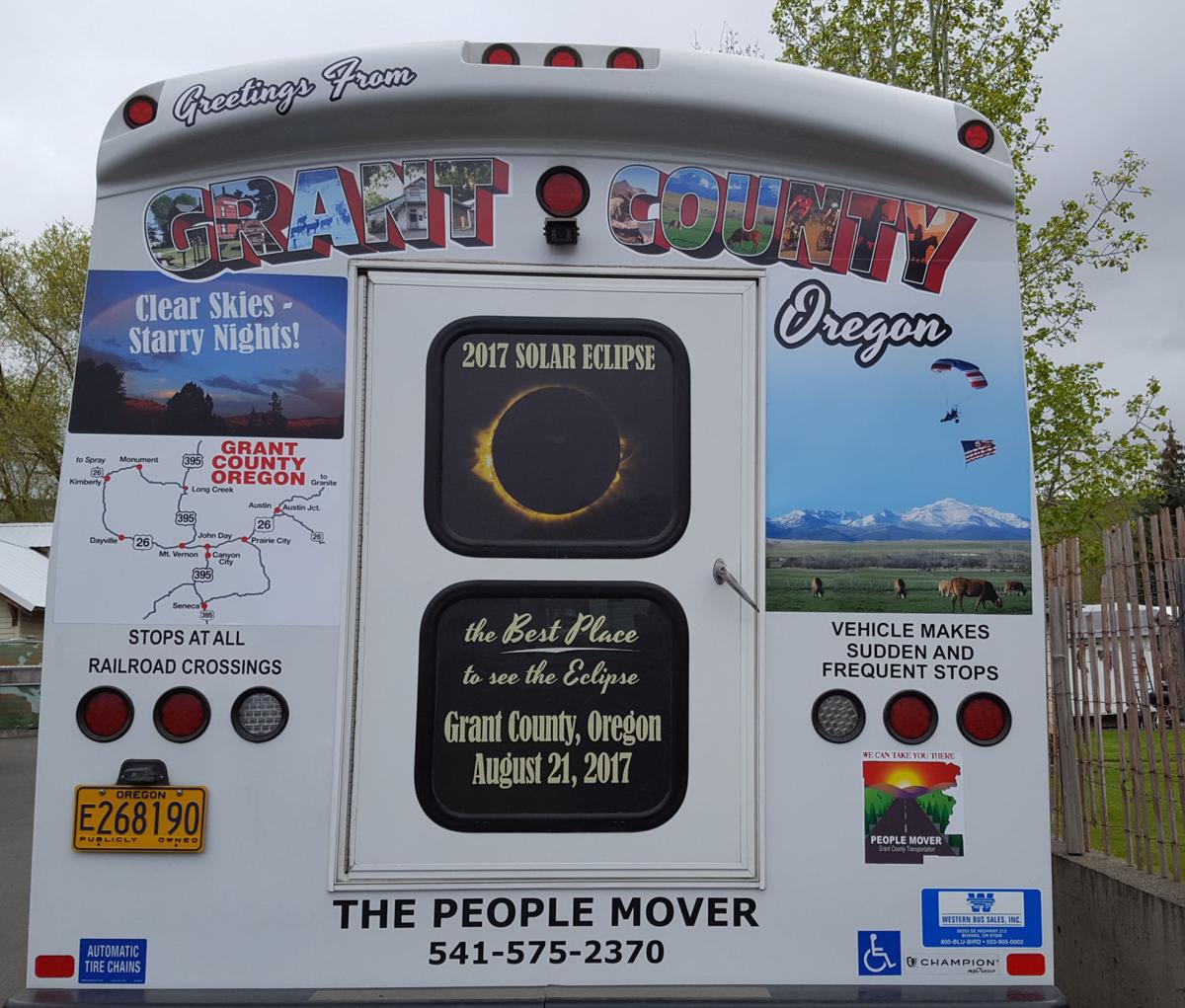 The People Mover provides transportation within Grant County with routes outside the county as well. 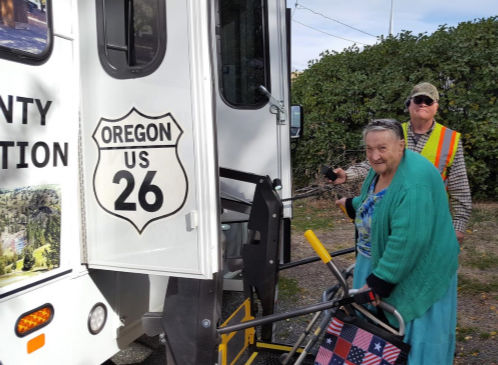 Ruth Harris, a dedicated rider of the People Mover public transportation service, boards a bus in 2017.

The People Mover has come a long way since it was founded in the 1970s. Still considered a frontier county, it was once a small, volunteer-ran program through the Senior Citizens Association that featured excursion shuttles and limited Dial-A-Ride. It is now a robust public transportation program that provides services throughout Grant County and rivals many of the services found in more urban areas.

Early in the People Mover’s history, the Senior Citizens Association, in coordination with the Grant County Chamber of Commerce, was instrumental in obtaining the first Greyhound “Rural Connection” in Oregon, winning a national UTMA Administrators Award. At that time, around 1985, the People Mover was led primarily by Ken and Helen Bogart, a group of dedicated volunteers and supporters.

In 1992, Grant County Transportation District was formed. Through a significant contribution from Bill and Gloria Smith, a new building was purchased and subsequently remodeled to house the People Mover operations. The Smiths were also instrumental in donating the match money to purchase the first People Mover bus. The People Mover services grew slowly, adding a twice-a-week service into Redmond and Bend when the Trailways bus service ended.

In 2006, the Oregon Department of Transportation conducted a review, and the subsequent findings brought about a change in board members, staff and service focus, charting a new direction for the People Mover. The focus shifted to public transportation, moving away from carrying freight materials. This allowed safe transportation for the citizens of Grant County to become the primary goal.

Services began to slowly expand. By 2011, the People Mover was making three trips to the Bend area every week, and had expanded operating hours to 9 a.m. to 4 p.m. Mondays through Fridays. In 2011, the People Mover also added non-emergent medical transportation, which allowed the district to provide more services to the area, and this contract revenue provided increased funding for grant matches.

Grants, contract revenue and ridership increased steadily through 2014 when the People Mover received its first Highly Rural Veterans Transportation Grant through the VA. This allowed an additional expansion of services, and the Pendleton/Walla Walla and Burns routes were created, providing once-a-week service to Burns and the Pendleton/Walla Walla area. Rural communities along each of the routes were also being served, some having access to public transportation for the very first time. Later, a Baker City route was added with the assistance of the HRTG Grant.

August 2017 brought an influx of people into Grant County for the Great American Eclipse. That provided the People Mover with additional opportunities to design and operate temporary fixed routes that ran from Dayville to Prairie City. The People Mover hired temporary staff and leased buses to ensure that it had enough capacity to meet the demand. Approximately 19,000 people visited for several days, adding 1,100 boardings to the passenger count.

In 2011, the annual passenger count was 22,248. In 2018, the year ended with a total passenger count of 37,540. Currently, the People Mover is on track to exceed 40,000 boardings. The People Mover continues to travel to Bend every Monday, Wednesday and Friday; Pendleton and Walla Walla every Tuesday; Burns the first, third and fifth Thursdays; and Baker City the second and fourth Thursdays.

With the transportation package that passed in 2017, the People Mover was able to deploy a deviated fixed route, the Red Line, that circulates through John Day and Canyon City every hour, beginning at 7 a.m. and the last route departing the bus station at 6 p.m. Another deviated fixed route, the Green Line, was deployed that runs between Prairie City and Mt. Vernon four times a day. Both deviated routes are fare free. The People Mover offers free medical transportation to eligible Grant County veterans and non-emergent medical transportation through a contract with Greater Oregon Behavioral Health Inc.

The People Mover also provides transportation for the Long Creek, Monument and Kimberly areas to John Day, Bend and Walla Walla with reservations.

The People Mover also continues to provide demand response services from 8 a.m. to 6 p.m. Mondays through Fridays and from 9 a.m. to 4 p.m. Saturdays.

The 2017 transportation package also provided the People Mover with an opportunity to expand even further. Discretionary grant applications have been applied for that will add a 25-passenger ADA-compliant bus; a bus shelter at Grant Union high school, in coordination with Oregon Department of Transportation and Safe Routes to School; a weekly bus route from John Day to Ontario; Phase 2 of the property expansion project for earth work and paving; vehicle hardware and software that would allow real-time communication and tracking of vehicles as well as automated stop announcements and other features.

Today, the People Mover is receiving state and national attention for the amazing services that it provides. The People Mover has a paid staff of 1.5 dispatchers, 10 drivers and a district manager.

The district manager has been appointed to regional, state and national transportation advisory boards, ensuring that rural public transit has a voice. Grant County public transportation has a very bright future and is leading the way as an amazing example of how rural transportation ensures valuable local and regional connections are available to everyone.

Angie Jones is the district manager for the People Mover/Grant County Transportation District.

PROGRESS: Mt. Vernon city leaders have projects in the works