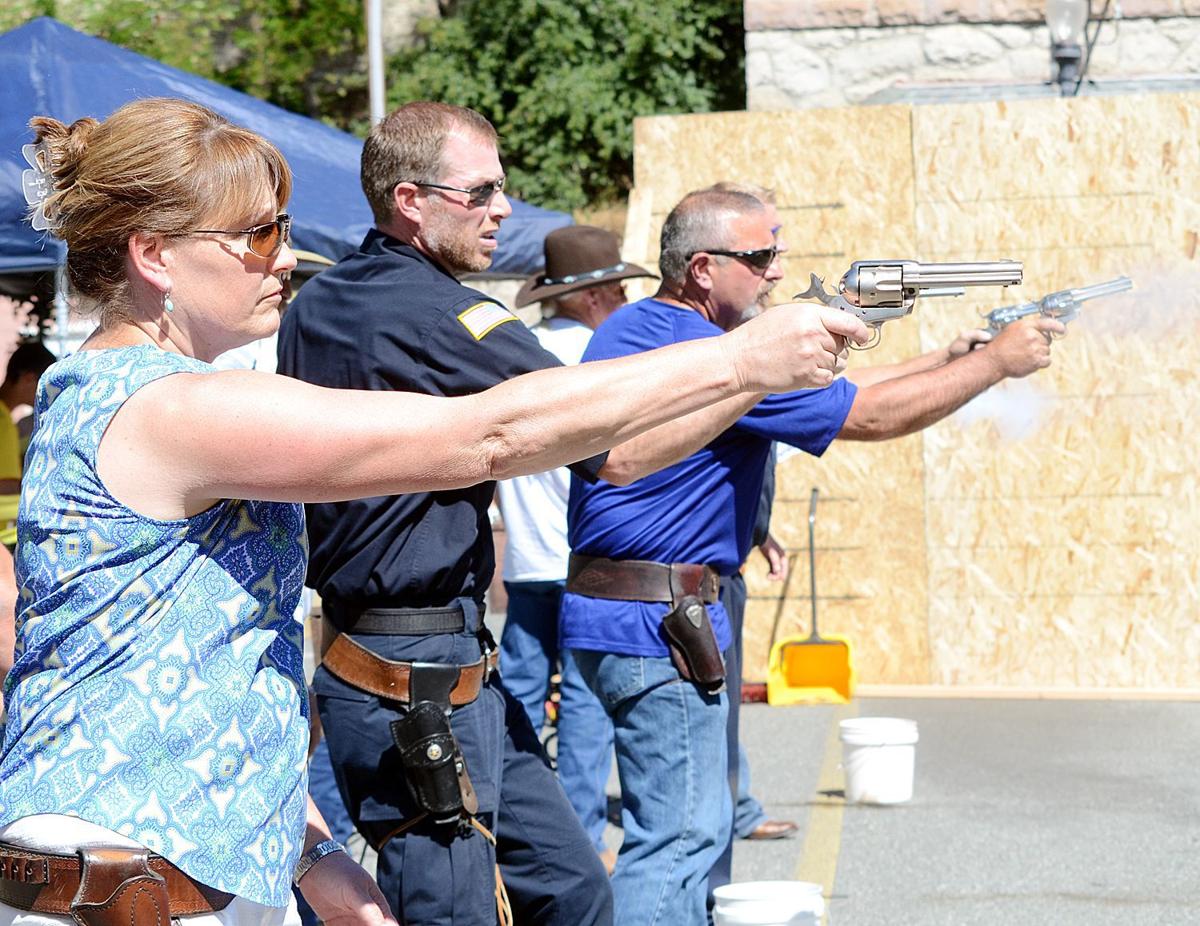 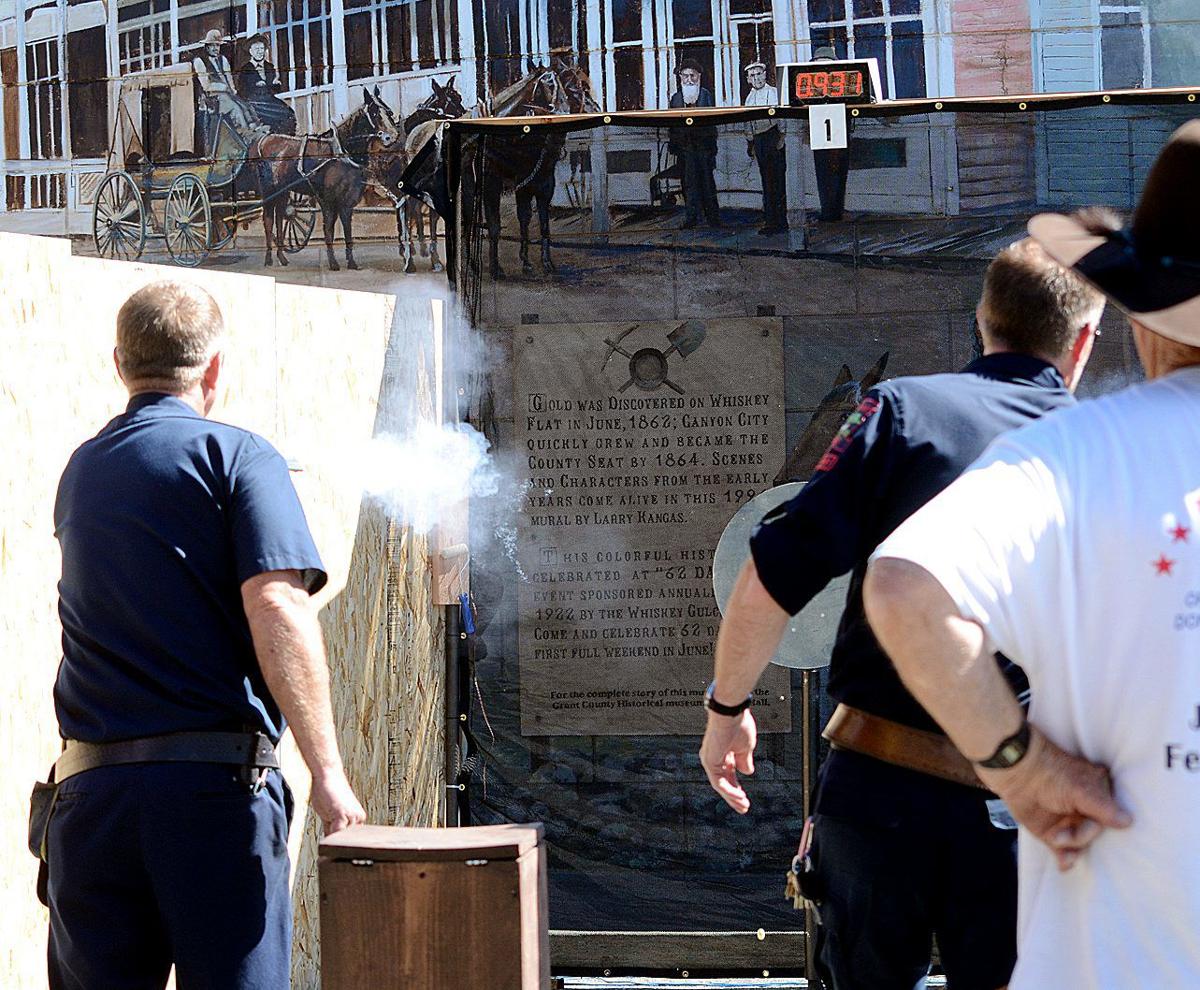 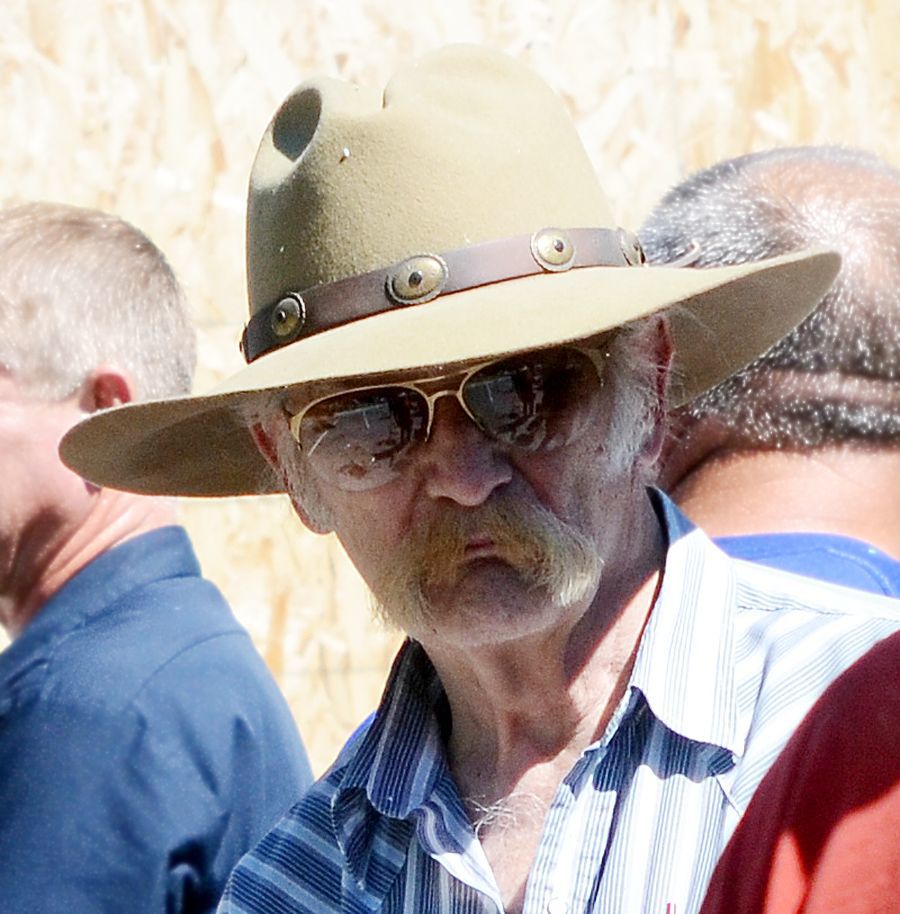 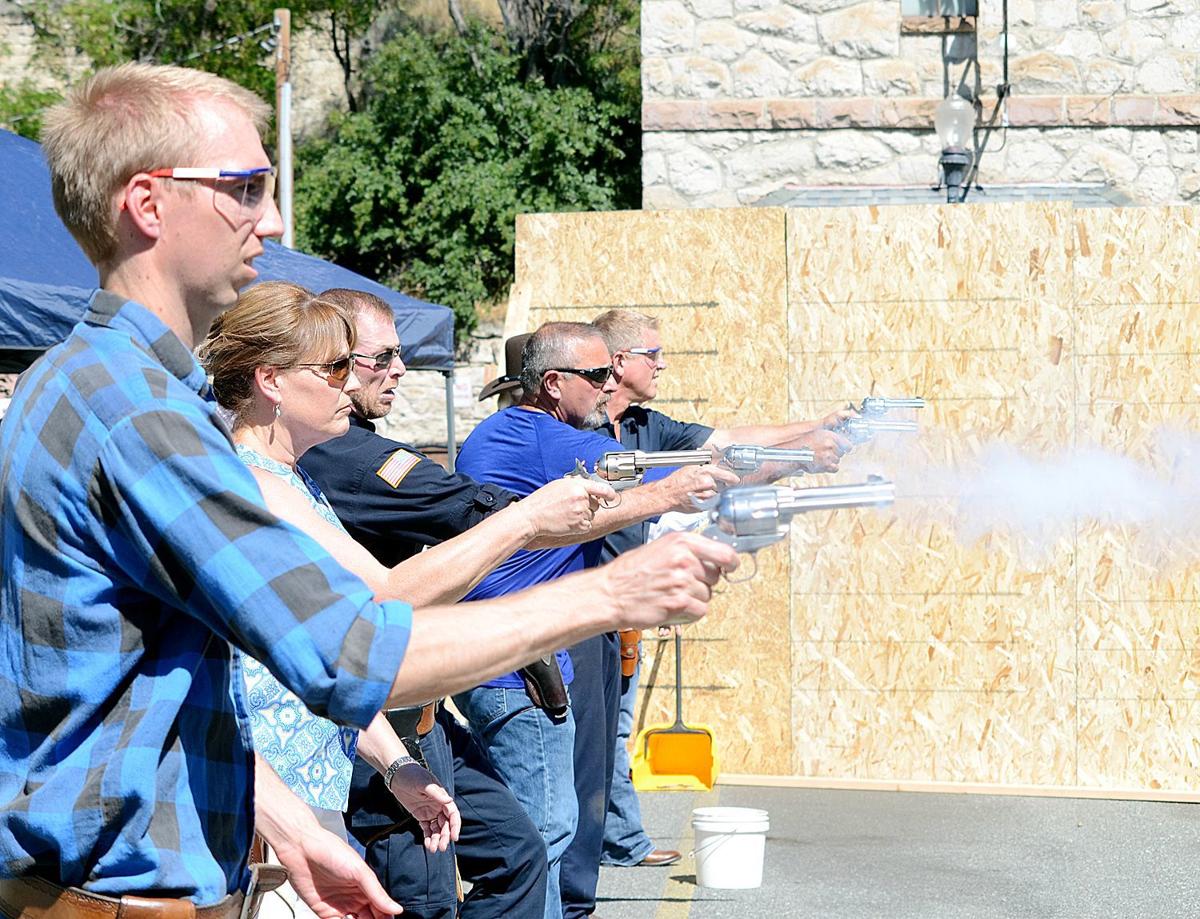 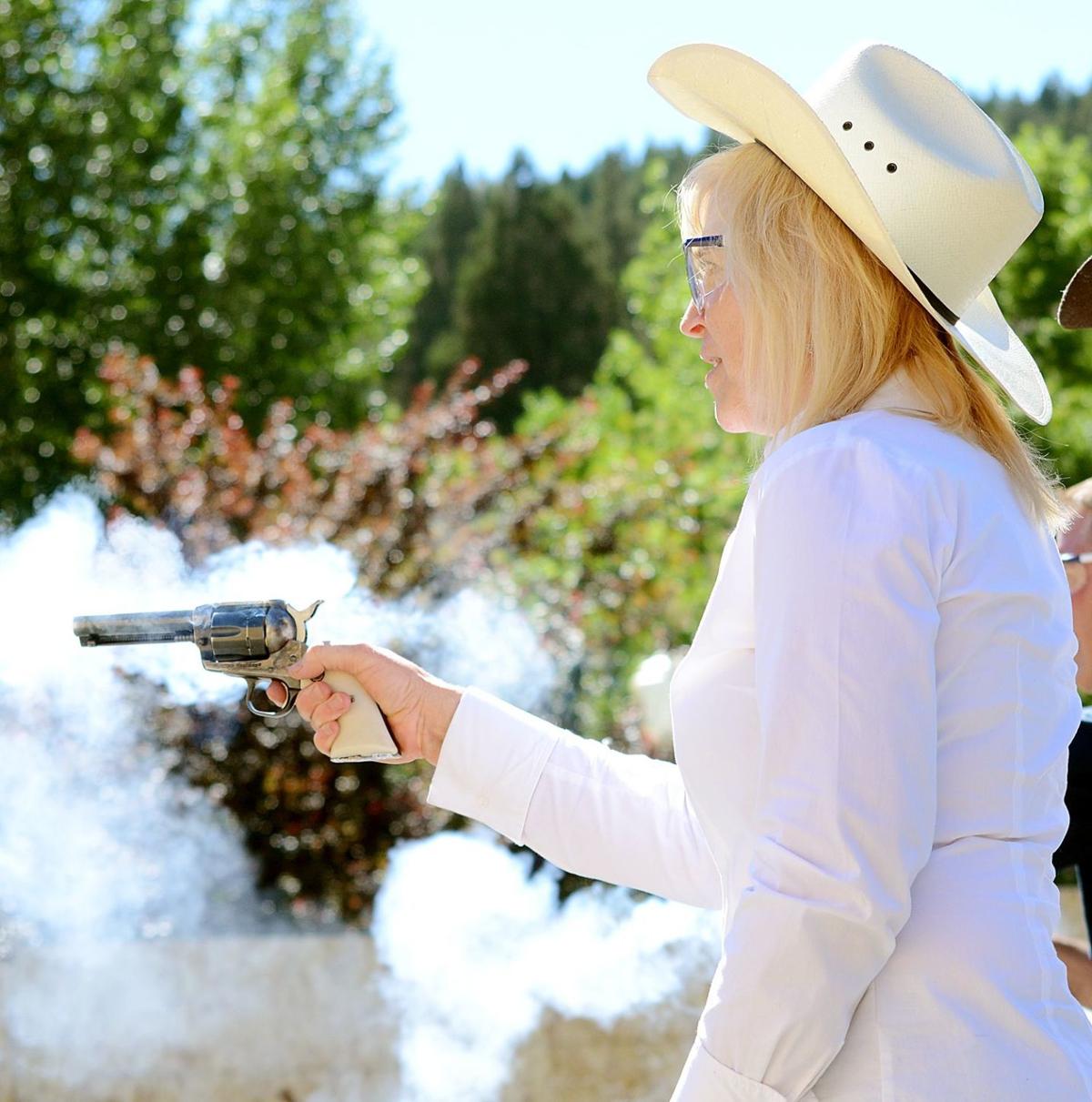 Karla Averett tries her hand at Cowboy Fast Draw during the celebrity event in Canyon City. 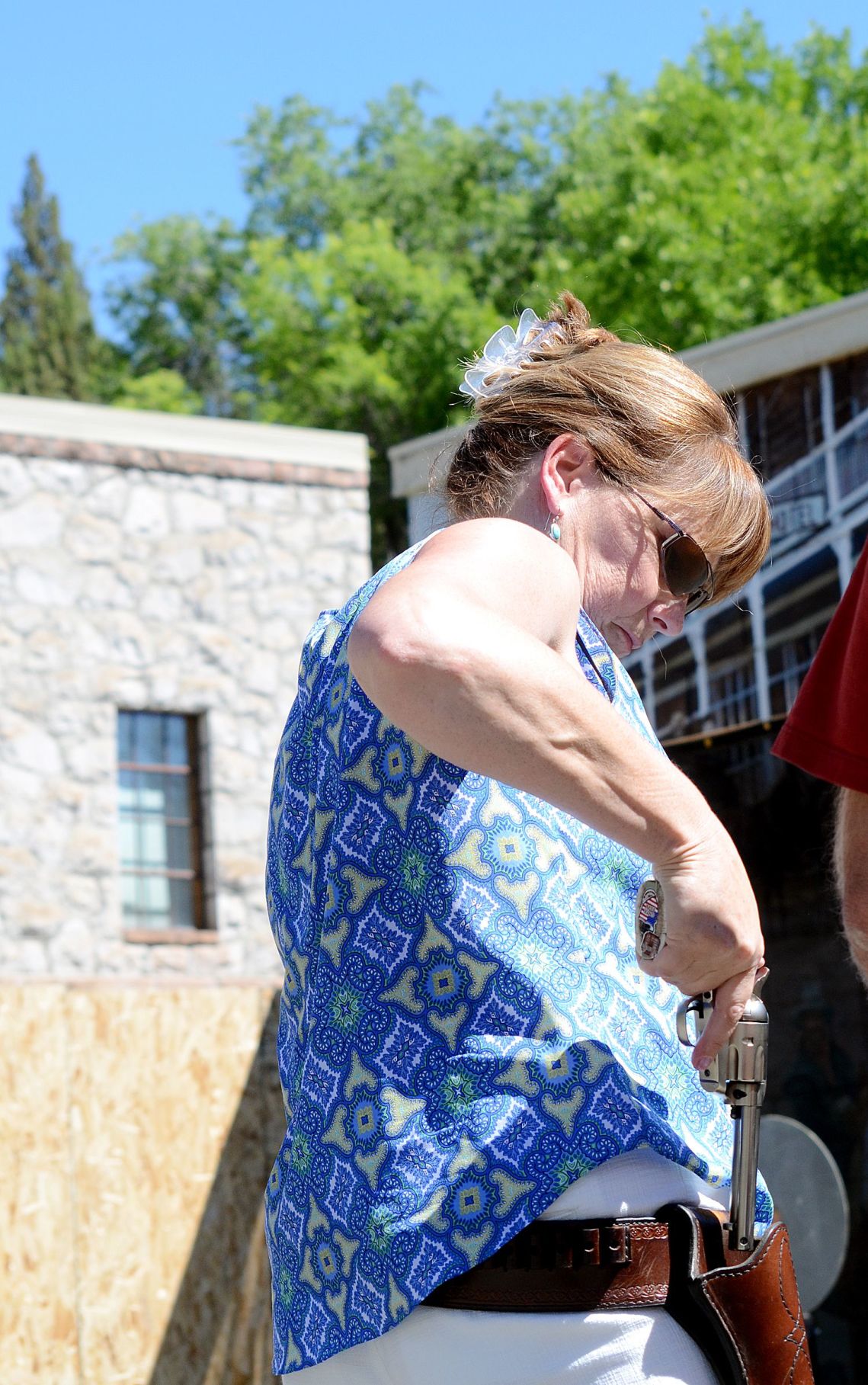 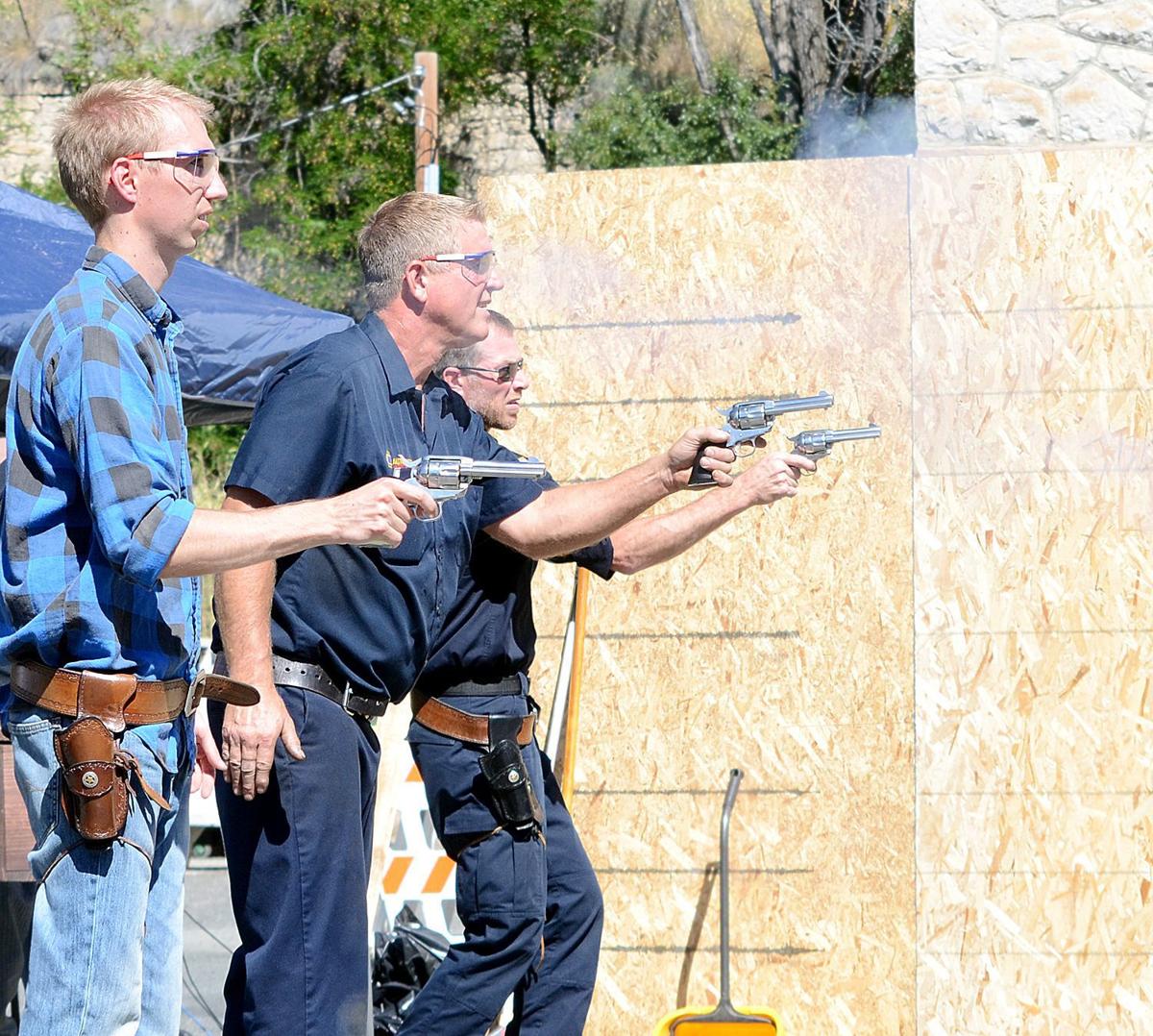 Surviving the earlier elimination rounds in the “celebrity shoot” are Matt Ipson, left, Ron Lundbom and Todd McKinley. Lundbom was the top shooter with Ipson second and McKinley third.

Karla Averett tries her hand at Cowboy Fast Draw during the celebrity event in Canyon City.

Surviving the earlier elimination rounds in the “celebrity shoot” are Matt Ipson, left, Ron Lundbom and Todd McKinley. Lundbom was the top shooter with Ipson second and McKinley third.

CANYON CITY – With guns slung low around their hips, several competitors rode into town ready for a showdown.

It felt like Canyon City’s 1862 gold rush days, but it was just a bunch of friendly folks gathering for the July 11-13 Cowboy Fast Draw Association’s Oregon State Championship.

This is the fifth time the competition has been held in Canyon City.

“It’s a fun event, and I think everyone enjoys it,” said city recorder Corey Rider. He said several residents who hadn’t attended the event before made it down to the city park to see it.

“It was a busy time downtown,” he said.

Hosting the competition were the Idaho Shootists and Great Western Fast Draw Club, with Canyon City resident Ray Thielke heading up the event.

Using single-action .45 caliber guns with wax bullets and primer as propellant, competitors line up side by side, as many as eight at a time.

When a red light flashes on, shooters grab their guns, aiming at metal targets which record the shooters’ times.

Kicking off the Wild West-style event were local shooters in a “celebrity” competition held last Thursday.

Lundbom, a lefty, took home a trophy with a best time of .781 in the local celebrity rounds.

Three of the shooters were local residents, including Thielke aka “Oregon Drifter” and Dan Vandehey, “Man from Canyon City.”

The winners of the state competition were Marshall Cooper of California in the men’s division; “Miss B. Haven” of Caldwell, Idaho, in the women’s division; and “Spud” – Haven’s son – in the youth division.

Next up for shooting events is the Oct. 2-5 World Championships of Cowboy Fast Draw in Fallon, Nev.

Thielke said that while the Canyon City event was a success, numbers participating in the various shoots statewide and nationwide are down.

He hopes to generate more interest in the sport, and is willing to introduce the sport to others.

The local event is “a lot of work, but I enjoy doing it,” Thielke said. “The shooters enjoy it, and I know it helps the John Day area.”