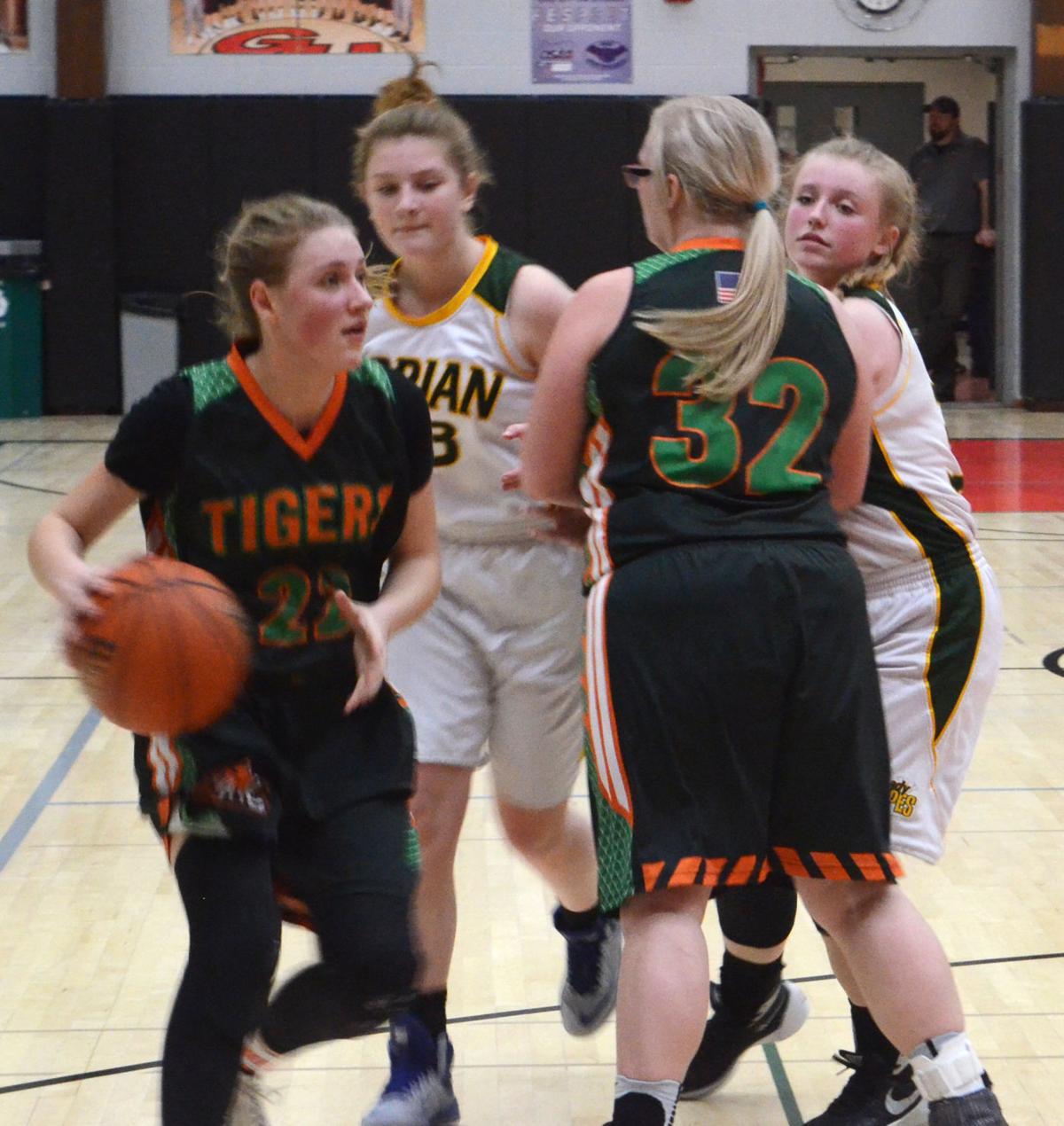 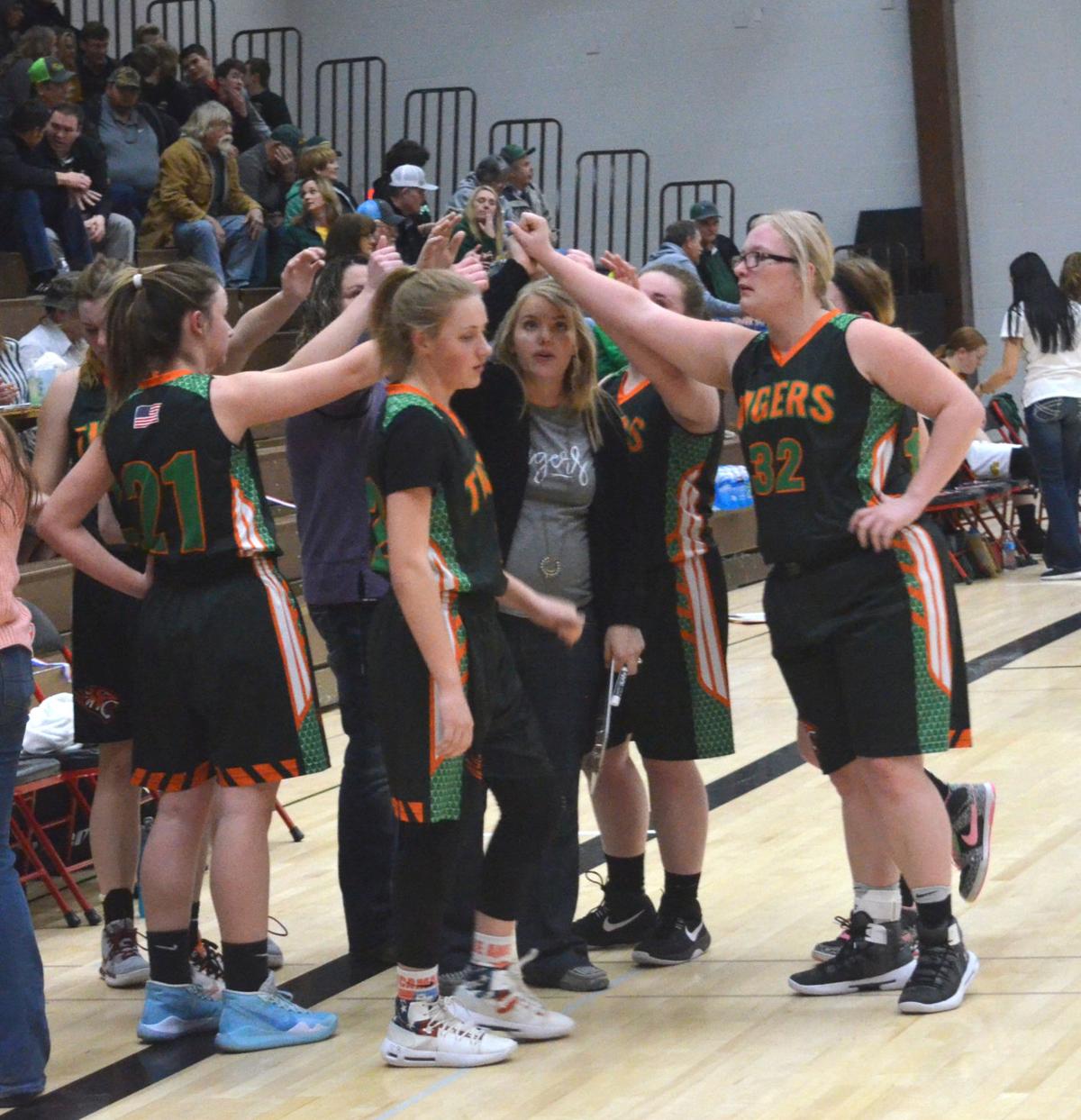 Head Coach Cheyenne Perkins motivates the team as they head out of halftime against Adrian on Feb. 20. 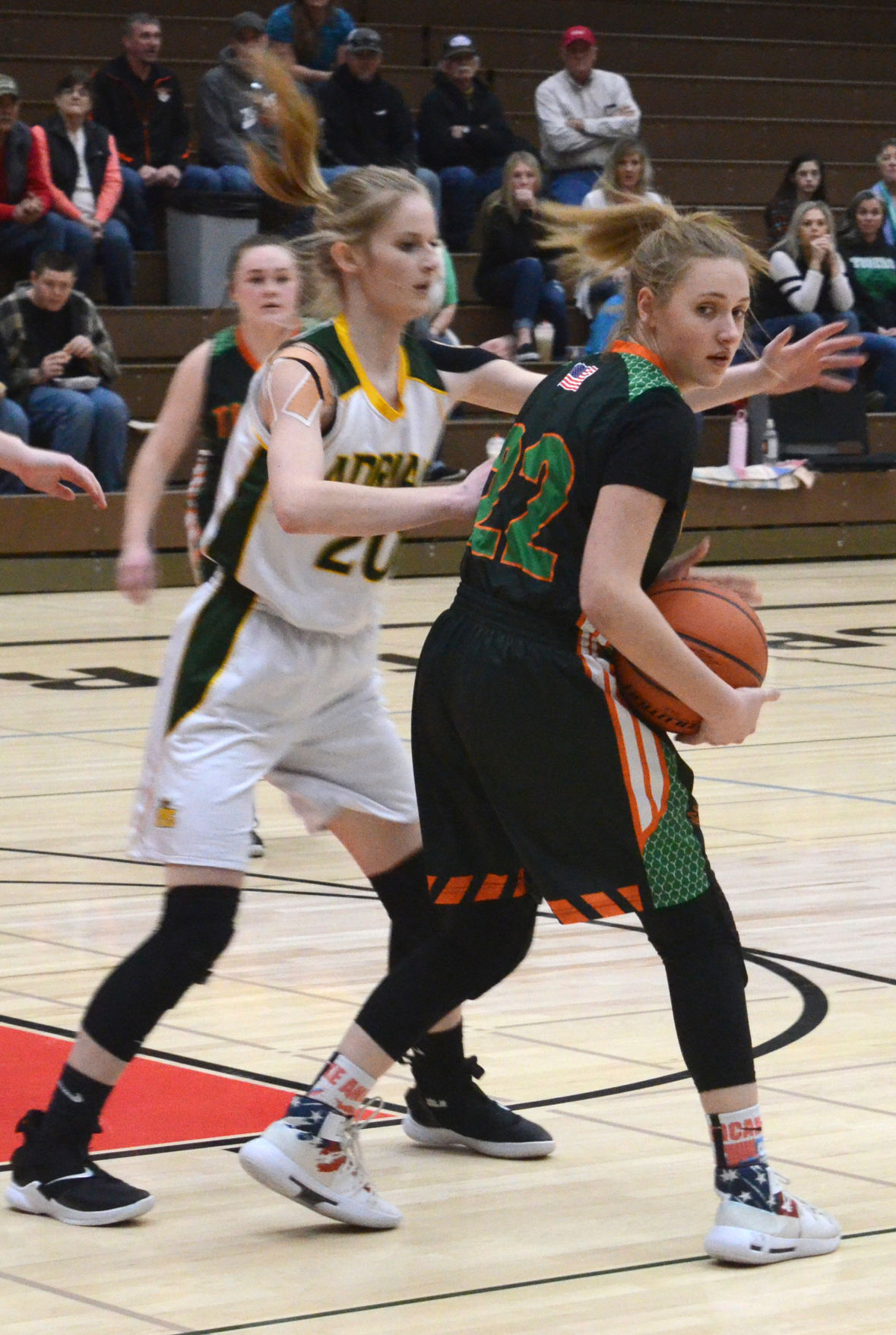 Dayville/Monument senior Denali Twehues looks for an opening in a game against Adrian on Feb. 20.

Adrian and Dayville/Monument face off in an intense game on Feb. 20.

Head Coach Cheyenne Perkins motivates the team as they head out of halftime against Adrian on Feb. 20.

Dayville/Monument senior Denali Twehues looks for an opening in a game against Adrian on Feb. 20.

Adrian and Dayville/Monument face off in an intense game on Feb. 20.

The Dayville/Monument girls basketball team fell 39-25 against the Adrian Antelopes on Feb. 20 in the first round of the High Desert League Tournament, but the Tigers valiantly fought against Adrian to the last second.

The game started with low scores from both teams with each side playing offensively and fighting for the ball.

“Adrian is always a physical game so (the Tigers) did a good job at being physical back but keeping their composure,” said Cheyenne Perkins, the Tigers’ head coach.

By the halfway mark of the first quarter, the Antelopes were up 7-0. Senior Denali Twehues shifted the tides, scoring 2 points and then following up with a free throw, to make the score 7-3.

In the second quarter, Adrian picked up steam, scoring 12 points in the second, while limiting the Tigers to 6 points for the quarter. Even with Adrian’s lead growing by the end of the first half, the Tigers continued to work together for the second half of the game.

The final quarter started with Adrian in the lead 31-15, but within the first 30 seconds, Twehues scored 3 points to jump start momentum. Dayville/Monument would finish the last quarter scoring 10 points. Even with the momentum, it was not enough, and the game ended, 39-25.

Even though they lost, Perkins was proud of her team’s performance and how they played even with illnesses affecting the teams practice opportunities. The Tigers then went on to play against Four Rivers in the consolation game on Feb. 21 and ended the season on a high note with a victory 48-30.

“It was really fun to coach all of them,” Perkins said.

For Perkins, a rewarding experience this season was witnessing the growth and improvement in the team and being able to coach her sister.

“You don’t judge a good season on if you have wins, you judge it off of if they are learning, and I take our season as a success because the girls really grew and are ready for next year,” Perkins said. “It was a lot of fun, and I really enjoyed the girls. I enjoyed teaching them and them teaching me.”

Spring post-op: What's next after a steady spring for experienced OLB group?