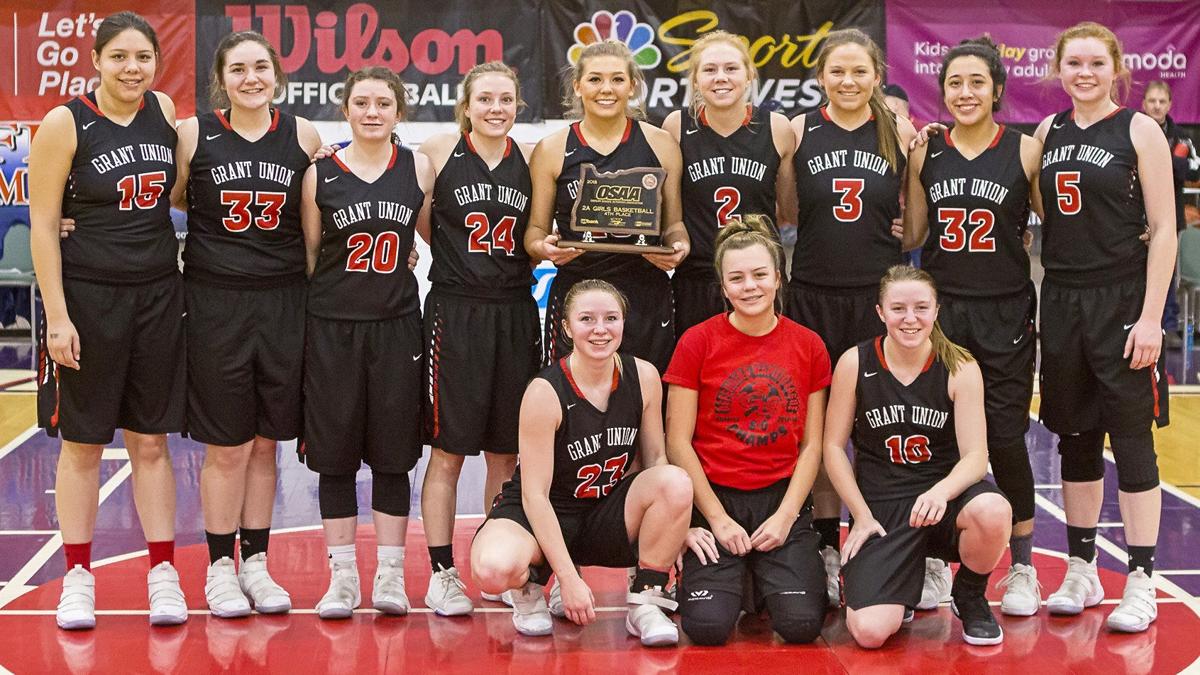 The Grant Union girls basketball team poses with its fourth-place trophy after the OSAA 2A Girls Basketball State Championship Saturday in Pendleton. 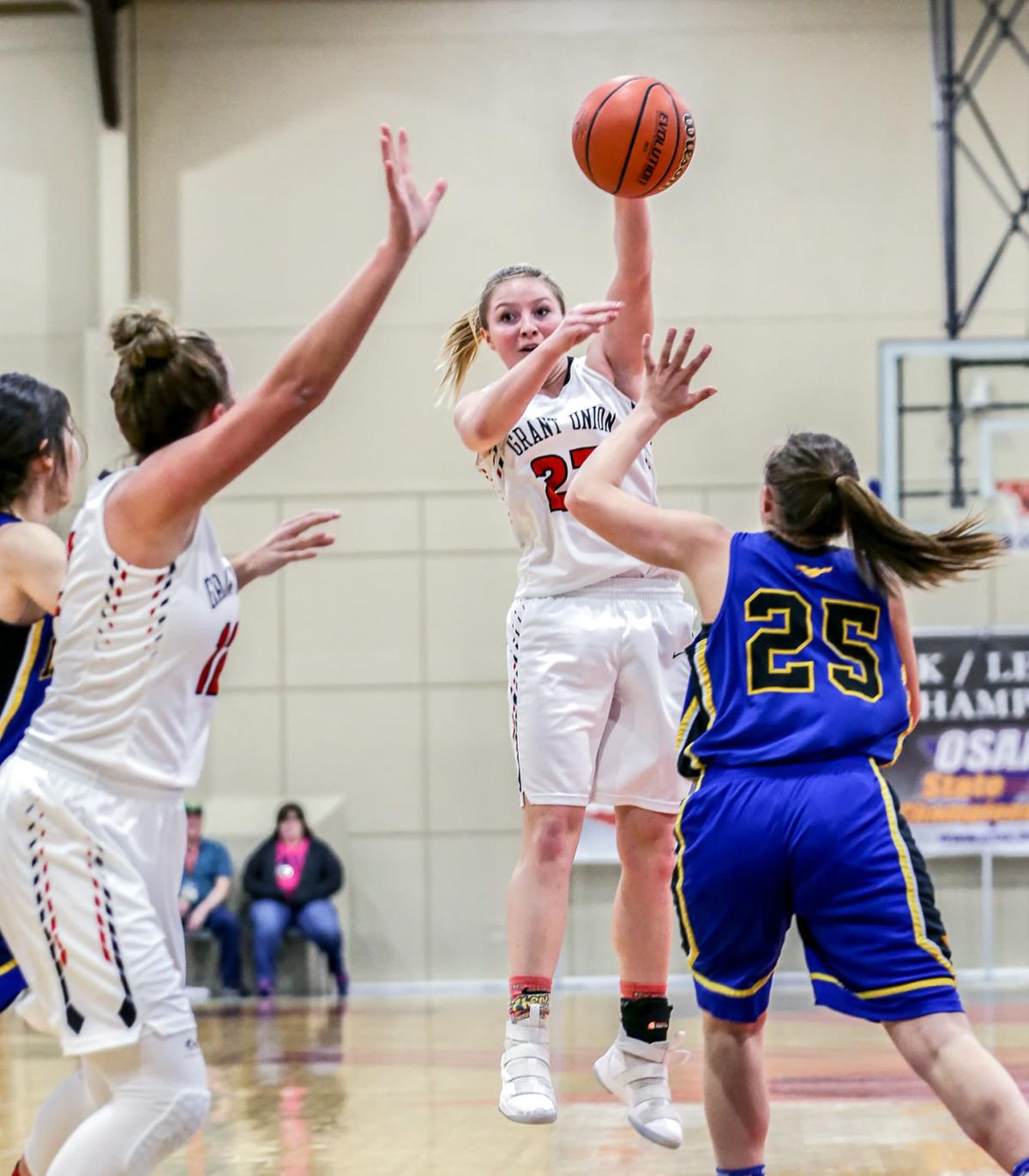 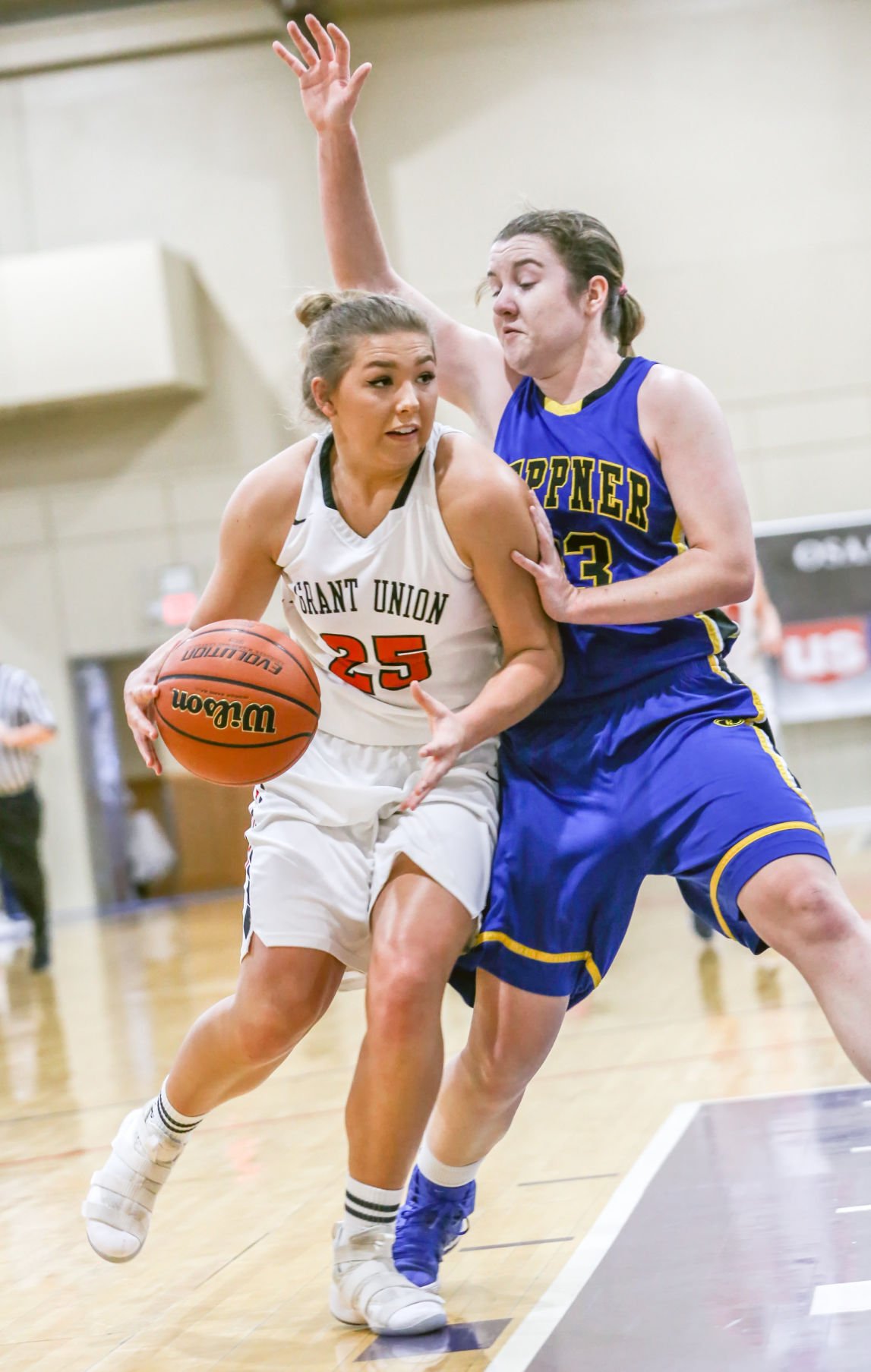 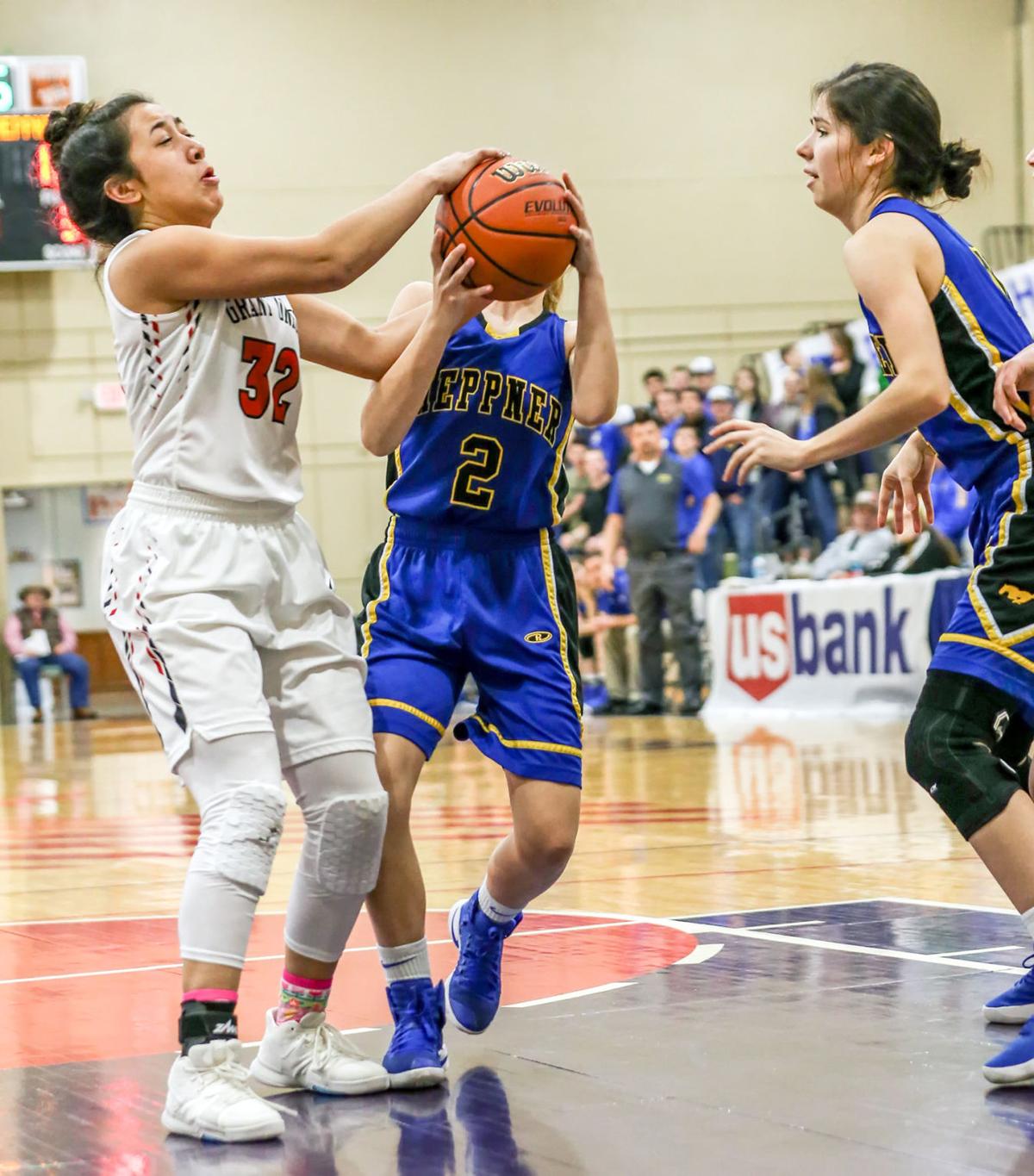 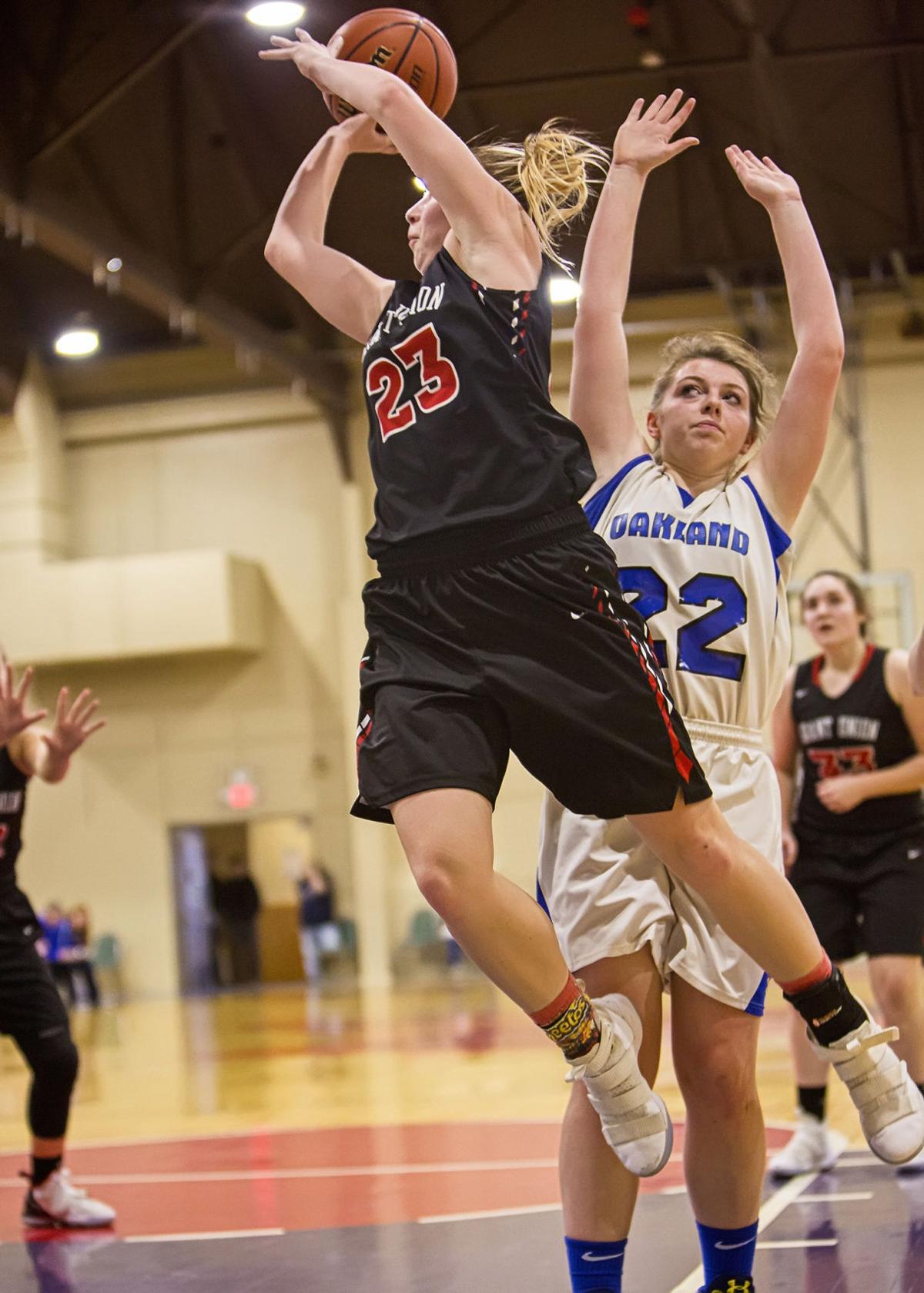 Grant Union's Kaylee Wright shoots the ball in the team's consolation finals win over Oakland for fourth place Saturday at the state tournament in Pendleton. Wright led all scorers with 22 points and was named Player of the Game for Grant Union.

The Grant Union girls basketball team poses with its fourth-place trophy after the OSAA 2A Girls Basketball State Championship Saturday in Pendleton.

Grant Union's Kaylee Wright shoots the ball in the team's consolation finals win over Oakland for fourth place Saturday at the state tournament in Pendleton. Wright led all scorers with 22 points and was named Player of the Game for Grant Union.

Grant Union lost the quarterfinal on Thursday to the Faith Bible Falcons 53-49. The Prospectors then made a strong finish, defeating the Heppner Mustangs 62-46 in the consolation semifinals on Friday, with a 54-44 win over the Oakland Oakers on Saturday for fourth place.

“The past couple of years we came out with no hardware, and we were hoping to come out first, but even though we lost our first game, we still played like it was the championship,” said Grant Union senior Mariah Moulton. “Everyone worked hard. I wouldn’t change a thing about the season if I could.”

“It was fun watching some of the girls step up their game and not back down,” he said. “The bench came up big all tournament long.”

Faith Bible’s heighth caught them off guard, Hallgarth said. While their Player of the Game was 5-foot-7, two other key players, twins Sarah and Katie Fajer, are 6-foot-1.

“Once we made the adjustment at halftime and knew what to expect from them, we knew we would come back,” Hallgarth said, adding his team excelled at defense and making adjustments on the fly, including some line-ups they hadn’t used before.

In the end, it came down to a few plays that made the difference in the Falcons’ favor.

Trinity Hutchison started off the scoring for Grant Union with a jump shot off an assist from Mariah Wright.

Grant Union led 13-11 going into the second, and were neck and neck to halftime. In the third, the Prospectors lost some ground, but came back, trailing 38-37 going into the final 8 minutes.

The teams tied the score twice. Then both had a handful of missed shots.

Grant Union was off to a fiery start against Heppner.

The Prospectors met up with Heppner early in the regular season, on Dec. 16, with a 50-39 win.

Kaylee Wright racked up 10 points in the quarter, which included two 3-pointers and 2-2 at the free throw line. McKrola added 4 points and Hailie Wright added 2.

In the fourth, Heppner came within 8 points of Grant Union 54-46, but then the Prospectors ran away with the 16-point win.

Grant Union Player of the Game was Kaylee Wright with 32 points, seven steals and seven rebounds. McKrola had 8 points.

Heppner Player of the Game was Sydney Wilson with 17 points.

Grant Union, the No. 4 seed, ended the tournament on a high note, defeating the No. 3-seeded Oakland Oakers.

Kaylee Wright led the team with 22 points in the game, followed by Hutchison with 12, Moulton 9, Hailie Wright 6 and McKrola 5.

Grant Union had a 4-point lead in the first and 6-point lead at the half before they began pulling away.

Kaylee Wright, McKrola and Moulton each brought down defensive rebounds in the first 2 minutes of the third, which led to scoring opportunities.

The Oakers whittled away at the Prospectors’ lead, climbing within 7 points at the three-minute mark. Although Oakland outscored Grant Union 11-8, the Prospectors stayed ahead for the 10-point win, Hutchison and Kaylee Wright combining for 8 in the quarter.

Grant Union Player of the Game was Kaylee Wright with 22 points and five steals. Hutchison had 12 points and seven rebounds and Moulton had 9 points.

Oakland Player of the Game was Grace Whitten with 20 points.

Kaylee Wright said she’s glad they made it to state three years in a row.

“We did exceptionally well for being there three years in a row, and I hope to go back next year,” she said. “Our team worked really well. Winning as a team at state is always an awesome feeling, and we got to show people what we can actually do.”

Hallgarth, in his first year as head coach, said his philosophy for the girls was to play in the moment and keep their composure at all times, to play hard for their teammates and be a great teammate. He said there are great athletes on the team, but also great people.

“Our defense is what kept us in the fight all season long,” he said. “They knew that if we play hard on defense, we would have a chance to win any game.”

He said seniors Moulton, Mariah Wright and Whitney McClellan will be missed.

“The team, coaches and I will truly miss these three seniors and all that they accomplished this season,” he said.

He said the bench had a lot of playing time and experience this season, and he expects all but the three seniors to return.

“If we can get our summer ball on track this year, our girls should make another run into the post season,” he said.

Ex-Bobcat Alex Singleton shined bright for the Eagles in 2020